Whilst Interstate and Intercolonial Championships were conducted between crews and scullers representing their States in various forms from 1862, and test races were conducted amongst crews across Australia for national selection, the National Inter-Club Championships only commenced in 1962.

The first proposal for a National Championship was submitted by NSW at the AARC meeting in 1946 and it failed to gain support outside NSW. A second proposal was submitted by NSW to the AARC on 21st April 1948 in Tasmania. Kevyn Webb of NSW was the person behind these proposals. He recorded in 1982: Following the 1948 Olympic trials, I gained another important supporter in Ray Todd, famous oarsman and coach, and Melbourne Herald rowing writer, who by his support in Victoria, drew attention to the fact that Australia, unlike the rest of the rowing world, still did not have a National Open Rowing Championship. The 1948 proposal was supported only by NSW and Victoria and so was lost. The proposal suggested 2000 metre racing over two days in single and double sculls, coxed and coxless pair, coxed four, eight, lightweight four, lightweight single and lightweight maiden eights – all men. 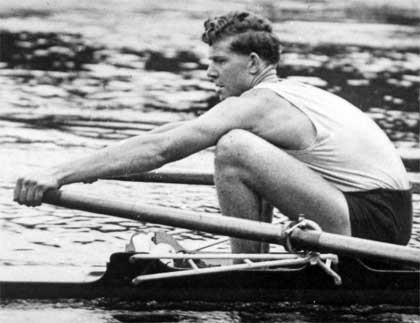 In 1982 Kevyn Webb then described the process through to eventual success in 1961: Notices of motion to conduct such an Open Championship, appeared on the Agenda of the Australian Rowing Council, at each of its meetings up to 1960. During this period, all of the States voted in favour of the National Regatta's introduction, however, in any one of those years, only three of the six States voted "yes" at one time. There was never a clear majority. My greatest disappointment came at one Australian Rowing Council meeting when the Regatta's introduction seemed certain, with a 3:2 majority, and N.S.W. to vote, the N.S.W. delegate claimed he had no instructions on how to vote from his State and cast a negative vote, to maintain the "Status Quo". As Captain of the Olympic Rowing Team in Rome in 1960, I had the opportunity to "corner" the Australian Team Manager, Reg Blundstone, (who was also Secretary of the Australian Rowing Council) and as a result, on our return to Australia, I was officially requested to prepare a comprehensive report for the A.R.C. on how a National Regatta could be introduced. That report was tabled at the 1961 Australian Rowing Council meeting, and following its adoption, the six States voted unanimously to hold the first National Championship Regatta on Lake Wendouree at Ballarat, in 1962.

The National Championships became an annual event in 1974.

The perpetual trophies at the National Championships are detailed in the summaries of the events and comprise:

Detailed record of racing for:

Summaries of Results by Event

Discontinued Events not covered above