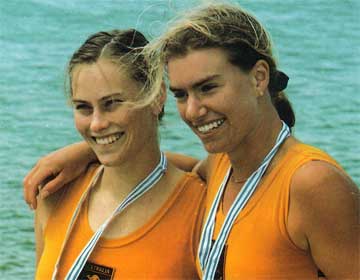 The first international competition for Juniors took place in Macon, France, in 1961 between France and Germany. A five nation junior competition started in 1962 with Germany, Italy, Belgium, Switzerland and France participating. The first Junior FISA Championships were held in 1970 and has been held annually since then.

In 1978 women's rowing was included. The term "World Junior Championships" appeared for the first time in 1985 with the regatta called FISA Championships for Juniors to that date. Australia first competed in 1973 and commenced regular representation in 1980.

In 1973, the Australian Amateur Rowing Council determined that it should ascertain the standard of racing at the newly conducted Junior FISA Championships. As there was no under age rowing conducted in Australia at that time at a national level but a strong and vibrant school boy competition, it was decided that the premier school crew of 1973 could represent Australia at these Championships provided that they funded the tour, the grading and selection committee endorsed the crew and the relevant headmaster agreed. The winning Victorian Head of the River crew from Scotch College defeated all other school crews at the 1973 Interstate Championships and so was given that opportunity.

The next representation was in 1980 when a men's coxed four raced and finished sixth.

Following the arrival in Australia of our new National Coaching Director Reinhold Batschi, test races were included on the 1981-84 National Regatta programme in coxed four boats for men and women. If the standard of the crews warranted, they would be selected to represent Australia at the FISA Championships. Initially the programme dictated that crews must be all from one state so that they could train in the state in which they resided. The tour duration was also limited to four weeks.

In 1981, a men's coxed four was duly selected and this commenced regular representation at these Championships ever since.

Index to this section

Australian representation and results at: