The following is an account of the development of masters rowing from Robin Poke.

Veterans' rowing, as it was then known, had become an important part of the rowing scene in Europe in the 1970s. Veterans could race at a number of international veterans' regattas at different centres throughout Europe and England, and in veterans' events conducted as part of local, 'open' regatta programs.

It took Australia some years to adopt veterans rowing at such an organised level.

In Victoria, provision had been made for veterans' races on the regatta program on a somewhat spasmodic basis since the 1972-73 season. In that time 16 Victorian clubs had boated veteran crews. In the first two years after the introduction of veterans' events there were up to six veterans' eights competing in each event. At this time heats and finals were conducted, over a 1600-metre course. It was then decided that the overseas practice of having 'first and final' events (in divisions where sufficient entries were received) would be adopted, with events held over 800 or 1000 metres.

The encouraging level of entries in the first season gave rise to the hope that it would be practicable for at least two age divisions to be introduced, but in subsequent years there were entries sufficient for only one division. The age qualification adopted (and somewhat loosely applied) was that a veteran rower was at least 30 years old and had not raced in open events for the past 12 months, while a veteran crew was to have a minimum average age of 35.

Late in the decade, however, the number of competing veterans dwindled, and insufficient entries resulted at a number of regattas in events being cancelled. Viewed against the enthusiasm for and interest in veteran competition in other sports, such as athletics, cycling and tennis, it was considered unfortunate that veterans' rowing had not blossomed in Australia as had the 'movement' in Europe.

It was nevertheless reported in October 1978 that a four-oared crew of World War Two servicemen from the Mercantile club had established a unique record on Melbourne's Yarra River by covering more than six thousand miles in 28 years. The crew had rowed every Sunday morning from Mercantile's Prince's Bridge boathouse to Herring Island and back - a distance of approximately five miles. In late 1979, four members of the Sydney University Boat Club were victorious at the FISA Regatta for Veterans, as they were then called, held in Nottingham, England. That same year South Australian Bob Bradley became the oldest sculler to win a national open title in a class of boat for which FISA holds an international event when, with Rob Booth, he took out the lightweight double sculls on his home course.

Then, at the annual general meeting of the Australian Amateur Rowing Council in March 1980 the NSW Rowing Assoication was granted approval to conduct the Australia Day Veterans' Championships late in January 1981 on Lake Burley Griffin, Canberra. (The ACT Rowing Association was at this time still an affiliate of the NSWRA). Events were to be held in all FISA age categories. This was regarded by Don Todd, one of the principal promoters of veterans' rowing, as a welcome step. Todd was a member of a Victorian contingent that in 1980 emulated the feats the previous year of Sydney University in performing well overseas. The Canberra event duly took place amid great acclaim, with the only disappointment the lack of women's entries.

In 1984 it was announced thst the first ever World Masters Games, including a rowing regatta, would be held in Toronto the following year. Meanwhile five Australian entries had won at the 1984 FISA Veterans' Regatta in Belgium. In mid-1985 came the first reference to the ARC's Veterans' Liaison Committee.

There was duly an Australian 'invasion' of Toronto, for not only the World Masters Games but also the FISA Veterans' Regatta. Prominent among the winners were George Xouris of Western Australia and Victorian Dick Garrard.

An international masters regatta was held in Perth in conjunction with the 1987 America's Cup event, a week after the Australian Veterans' Championships in Canberra. Later in the year a team of NSW police won four gold medals at the FISA Veterans' Championships in Sweden, while later still a regatta on Lake Barrington was part of the first Australian Masters Games. In 1992 a contingent of rowers from NSW, Victoria and Western Australia travelled to Cologne for the World veterans' regatta, and returned with thirteen gold medals.

In 1989 Australians competed at the World Masters Games in Denmark and the FISA Veterans' regatta in Vichy, France, following which the second Australian Masters Games regatta was held, at West Lakes, Adelaide. Australians completed an excellent 1991 for national rowing by picking up a swag'of medals at the 18th FISA Veterans' regatta in Miami, Florida, following which the third Australian Masters Games Regatta was held at Lake Wivenhoe, Queensland. By this time masters regattas were being held in most states. Early in 1993 FISA struck the word 'Veterans' from its Statutes, to be replaced by 'Masters', and endorsed mixed Masters events. The 4th Australian Masters Games regatta, held in Perth in 1993, attracted competitors from Hong Kong and Zimbabwe and was adjudged an outstanding success, as was the Australian Masters Regatta at Penrith. The FISA Masters regatta in Vienna that year attracted a massive 25,000 competitors, with the Australian contingent again very successful. It was announced a year later that the 1997 event would be held at West Lakes, Adelaide.

Meanwhile the 1994 World Masters Games regatta at Lake Wivenhoe attracted more than 900 competitors, among them multiple medallist Jeff Sykes. Another was Margot Foster, who later penned some interesting insights as to why an Olympic and Commonwealth Games medallist would return to this form of competition. It was something, she wrote, she had never imagined doing: she thought she should be looking forward to, and for, new experiences rather than looking back and reliving old ones, particularly having made the transition from organising her life around rowing to fitting rowing into her life. But time had a way of changing attitudes, and having asked herself questions such as: 'Is it for 'oldies' who never made it?' and: 'Am I living in the past?' the three days of competition and the months of training changed her mind about masters rowing.

'It was fun, friendly, relaxed and enjoyable. The medal count was incidental to good racing and good competition; to fraternal lakeside conviviality and the thrill of heaving the unfit and excessively larded body over the line, and being able to describe a race as a good one and having people say it looked good, too.' Indeed, such was the impression the experience apparently made on Margot that shortly thereafter she was named as a member of FISA's Masters Commission!

And such was the growth of masters rowing in Australia that the need for information seminars for those returning to active rowing was perceived, encompassing such subjects as physiology, psychology, injury prevention and nutrition.

In September 1995 a group of 13 Australian rowers attended the 22nd FISA world masters regatta in Bled, Slovenia, but only five went to Hungary the following year.

In November 1997 the event was held at West Lakes, Adelaide, attracted 1800 competitors, and was promoted as the largest regatta ever held in Australia. An indication of Australian support for masters rowing was the introduction in the national magazine of a masters column, and occasionally columns from several states, while indicative of the dedication being demonstrated by competitors in the category was an article offering ten tips on tapering for big events! In October 2002 masters rowers from around the world descended on Ballarat to take part in the World Masters Games regatta, which unofficially declared itself 'the biggest regatta ever held in Australia'.

In addition to masters events there is available to those of less competitive inclination fundraising and leisure or pleasure rowing. Victorian Ian Law inaugurated an annual Rowathon on a 90-kilometre course on the Murray in aid of the Royal Flying Doctor Service that attracted rowers of all abilities, while FISA for many years has conducted pleasure tours along the world's waterways. In 1997 it conducted the first such tour in Australia, through the Riverland region of South Australia, which was described as 'sensational'. And, as was the case with masters rowing, a generic leisure rowing column appeared in the sport's national magazine, soon to be followed by columns from most states.

The current age categories for masters rowers are:

A Rowing Australia Masters Committee was formed in the 1980s and was originally known as the Veteran's Liaison Committee. The Chairmen/Convenors of the Committee have been:

This event is named in memory of Brian Vear, past Chairman of the RA Masters Committee, who passed away in 2008. His illness was diagnosed after the 2007 Championships.

Brian was a great rower, administrator and innovator in the sport. He was Chairman of the Rowing Australia Masters Committee until late 2007, an active masters rower and a life member of Rowing Victoria.

Brian joined the Banks Rowing Club in 1956 and was President from 1999-2006. Having completed his education at St Patricks College Ballarat, where he also distinguished himself as a member of their football team. It was an interest that despite his involvement in rowing he maintained for many years and included over 300 games for his schools Old Boys side.

From a Rowing Victoria perspective Brian’s work was of critical importance as a regatta and masters organiser. He showed how the Association could fund its critical development work through regatta organisation and set Victoria on a road which it has continued ever since. He was also an initiator of the development of masters rowing in Victoria, an activity which he truly loved.

From a Rowing Australia perspective, his work was of greatest importance in the development of masters rowing. Under his reign as Chairman of the Australian Masters Committee, the Australian Masters Championships regatta was created and this is now one of the major regattas in Australia. Brian was also Chairman of the Organising Committee of the rowing regatta at the World Masters Games in 2002. This was one of the largest international regattas ever conducted. Brian’s initiative in introducing the alpha/numeric boat numbering system for regatta management has now been adopted throughout Australia and at many international regattas.

In 2008 Rowing Australia approved the recommendation of the RA Masters Committee to name the perpetual Interstate Men’s Masters Eight trophy in Brian’s honour. His widow Julia presented the trophy in the same year at Nagambie.

The trophy for this event was originally awarded to H J Whiting, bow man in the winning Albert Park Rowing Club Senior Four at the VRA Annual Regatta held on the Upper Yarra course on 17th December 1904. It was donated by the Whiting family to encourage interstate competition for Masters. 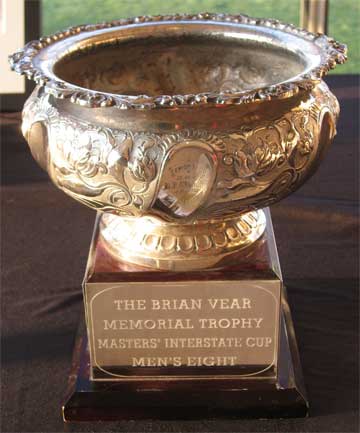 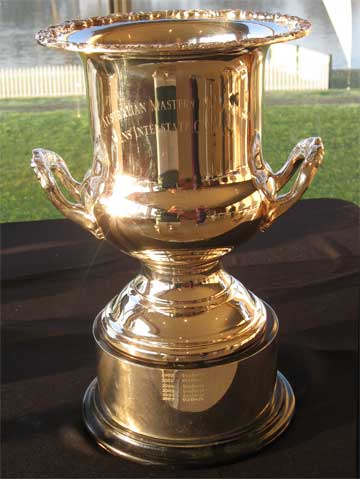 The women's eight trophy was the idea of the rowers of Toowong Rowing Club QLD who had become a recognized force at the National Masters Championships in 2004 having won the Women’s D eight for the second year in a row by 2003.

The trophy is inscribed:
Australian Masters Championship
Women's Interstate Eight
Donated in 2005 by Silvio Pradella
celebrating the success of the Qld Womens Eight Crew Interstate Masters
The trophy was brought into existence by Marion Elliot, Carol Watters and Glynnis Hood. 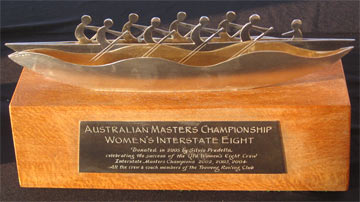 The Trophy for the Interstate Women's Eight

The three dimensional hand crafted boat with eight rowers and cox is made of sterling silver and is supported by a beautiful silky oak timber stand. 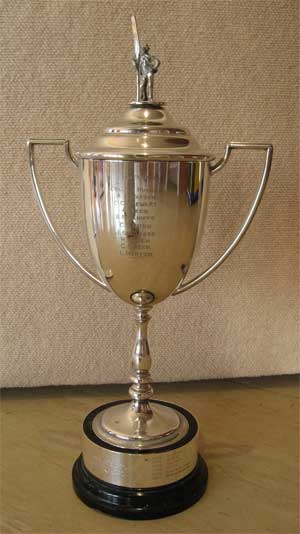 The Veterans Cup for the Women's Quad Scull