History of Australian Rowing at the Commonwealth Games

The Origins of the Games

The first recorded Commonwealth event was however, conducted in 1911 and known as the "Festival of Empire". It was held in connection with the Coronation of His Majesty King George V. The programme consisted of track & field, boxing, wrestling and swimming. The most successful nation was Canada and they were presented by Lord Lonsdale with a magnificent silver trophy of some 2 feet 6 inches high.

The idea of an Empire Games was reignited by the friendliness amongst Empire athletes at 1928 Olympic Games. The revival of the Empire meeting was established.

The first Commonwealth Games (then known as the British Empire Games) took place in Hamilton, Ontario, Canada in 1930. Bobby Robinson, a key force within athletics in Canada, finally initiated the event that had been talked about amongst Commonwealth nations for over thirty years. Eleven countries boasting 400 athletes in total participated in the first Games. $30,000 was provided by the City of Hamilton to these nations in order to defray travel costs of teams. 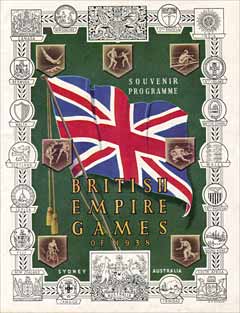 Since then, the Games have been conducted every four years except for 1942 and 1946, due to World War II. Seventeen Games have been held in total, with four of these hosted by Australian cities — Sydney 1938, Perth 1962, Brisbane 1982 and Melbourne in 2006.

While other Games around the globe have been founded on geographic or climatic factors such as the Asian, Pan American, African Games and Winter Olympics, the Commonwealth Games has been founded on history.

The Commonwealth Games Association claim that unlike other sporting events, the Commonwealth Games brings together nations from every corner of the world in a unique family spirit of shared history, of common experiences, of a uniting language, of links that transcend cultural barriers and physical borders.

In Australia, the governing body is the Australian Commonwealth Games Association.

Australian representation and results at:

The AARC was bitterly disappointed that neither rowing nor sculling was included in the programme. The following protest was issued:

"That the Australian Amateur Rowing Council express its astonishment and keen disappointment that such prominent sports as rowing and sculling have been omitted from the programme of the British Empire Games, most particularly when the Games are being held in the heart of the Empire, which is the home of the two sports mentioned."

This resolution was adopted by the Australian Empire Games Association with the further resolution:

"That a definite programme respecting British Empire Games be drawn up to include all major sports and only in cases where any particular sport, through practical competitive conditions not being available, could they be deleted."

In his report, the Australian delegate to the British Empire Games Association stated that the finalisation of the events was to be left to the financial guarantors; in the case of the London Games this was decided by the directors of White City and Wembley Stadia.

The Jamaican Games did not have rowing facilities and so the sport was not included in the programme. This was to the relief of the administrators of the sport and most rowers at that time as the vast funds required sending rowing teams for the limited competition proved the competition was not warranted.

"With the British Empire formally ended, the Kingston Games became the VIII British Commonwealth Games. There was a worry amongst the larger nations that Jamaica's infrastructure would not enable a successful Games delivery — but this proved to be largely unfounded.

"Controversially, also, the event programme was altered for the first time since 1950 with lawn bowls and rowing dropped and replaced with badminton and shooting instead."

Another Commonwealth Regatta was held in 2002 in Nottingham England.