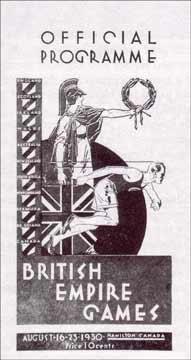 An invitation to the first British Empire Games was received by the Australian Olympic Federation (AOF). As the AOF did not favour sending teams to the Empire Games, a special committee was formed to deal with this matter. The committee received a donation of £5,000 from the British Empire Games Committee and invited nominations for a team of six. Pearce was nominated by the Australian Amateur Rowing Council (AARC) and this nomination was accepted.

The nomination of only a single sculler was mainly a result of the Great Depression and funds were very short throughout the sport. An example of the need for thrift was the fact that the 1931 Interstate Championships were cancelled. It is therefore quite clear that without the donation from the City of Hamilton, the Australian representation would have been poor. However Pearce would have probably have been sent regardless as he was reigning Olympic champion.

Bobby Pearce did not return home after these Games and took up residency in Canada where he lived for the rest of his life. He had been offered employment by Lord Dewar of the Scotch whisky fame as a salesman. The change of profession from carpenter to salesman had the benefit of now fitting within the rules of being a "gentleman" for the Henley Royal Regatta and therefore provided an opportunity to race.

"The city of Hamilton proved a gracious first host of the Commonwealth Games movement and is as important to it as Athens is to the Olympics. Then called the British Empire Games, the sociological, cultural and political makeup of the Commonwealth Movement has altered substantially since 1930.

"The inaugural Games were utilitarian and very down to earth, proving that more doesn't necessarily mean better. The athletes' village was the Prince of Wales School next to the Civic Stadium, where the competitors slept two dozen to a classroom. Despite missing some basic comforts, the participants were unanimous in their praise for the Games and Hamilton's hospitality."