Australian Rowing at the Olympic and Paralympic Games 1896-present

"In the name of all competitors I promise that we will take part in these Olympic Games, respecting and abiding by the rules which govern them, in the true spirit and honour of our team."
—Olympic Oath taken by an athlete of the host country on behalf of all assembled Olympians.

French educationist Baron Pierre de Coubertin (1863-1937) is credited with the revival of the Modern Olympic Games his imagination having been caught by the excavation of Olympia between 1875 and 1881 where the Ancient Greek Olympic complex was uncovered. He thought that at least one reason for the flowering of Greece during it's "Golden Age" was sport and the ideals behind the Olympic Games.

He also drew a parallel with 19th century Britain in the games played at the famous public schools. He wanted to bring the youth of the world together in friendly competition where differences of status, religion, politics and race could be forgotten.

It is a clear that not all differences were to be ignored by him: he followed the Ancient Greek example of male only competition. Much to his chagrin, two women's swimming events were introduced in 1912 and, gradually ever since, women's events have continued to increase in number.

Between 1892 and 1894 he sought support for the modern Olympic Games from both within France and throughout the world. He convened the Congress Internationale Athletique de Paris (Paris International Athletic Congress) which decided on 16th June 1894 to "revive the Olympic Games on principles and in the conditions to the requirements of modern life".

"The Olympic Games are not merely world championships, but the celebration of impassioned effort, of multiple ambitions and of every form of youth activities as each generation appears at the threshold of life."
—Baron Pierre de Coubertin

Baron de Coubertin was a keen sculler who rowed well into his later life. He was a member of Societe d'Encouragement du Sport Nautique, the oldest rowing club on the Marne River in France.

He described rowing as the most beautiful of sports. The Baron thought so much of the sport that he sought to include sculling as one of the disciplines in the modern pentathlon in place of shooting. It was only the question of the additional administrative burden imposed on Olympic officials that dissuaded him. 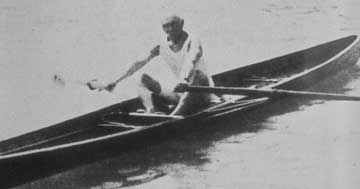 Picture from 'The Story of World Rowing' — Christopher Dodd 1992

Australia has performed excellently at this prestigious and important event. 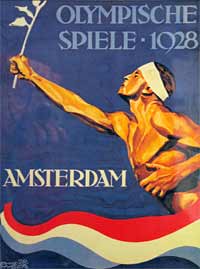 see posters from each Olympic Games