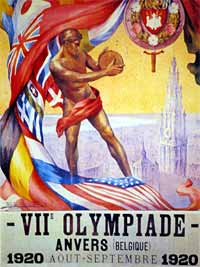 The Victorian and New South Wales Rowing Associations could not agree on the basis for selecting a crew. While the time available to organise a crew was a problem, the Victorian Association indicated that it was opposed to competing at the Games "where conditions were not always satisfactory", but favoured competing at Henley Royal. This was a reference to the unfair course at Stockholm in 1912 where Australia drew a course which necessitated a sharp turn near the finish to avoid a swimming bath before negotiating a bridge. No crews were sent to these Games.

The Editors cannot help speculate that a number of other factors were also at play. The Interstate Championships had just resumed in 1920 after a 6 year break for the war; there had been no further progress on the formation of a national rowing association; the best performed rowers in 1920 were from South Australia (and by implication not from Victoria and New South Wales who had a history of international competition); the cost of the exercise following many years of war; the short time in which to raise the funds; and our rowers had only recently competed in the 1919 Peace Regatta at Henley and the Inter-Allied Games in Paris. The combination of these situations would have made a positive outcome almost impossible

Arthur Baynes (QLD) won the Interstate Sculling Championship on 15th May 1920. Despite the debate regarding an eight, Baynes was offered a place in the team for Antwerp as a single sculler. He declined on the basis that the arrangements were too hurried for a proper preparation.

However, as with other Olympic Games of this era, namely 1908, 1912 and 1932, an Australian raced in the English team. At these Games it was John Campbell (VIC) raced in the silver medal winning English eight.

The regatta also saw the appearance of American John Kelly Snr who had won 126 straight races but had been barred from racing at Henley because the Vesper Rowing Club in Philadelphia had been accused of professionalism three years earlier. Kelly got his revenge at the Olympics by defeating the Diamond Sculls winner Beresford. The race was superb with the lead changing constantly and the finish with less than a second between them. He was not too exhausted to recover and win the double sculls. He also won gold in the 1924 Olympic Games in the double scull. His son John Kelly Jnr (brother of actress Grace Kelly) was also an Olympic medallist winning bronze in the single sculls at the 1956 Olympics and later became President of the United States Olympic Committee.

The eights race was of interest with the British eight overtaken in the last 100 metres and the bronze medal in dispute. The Swiss crew was to be given the bronze because they recorded the third fastest time in the preliminaries. After a protest it was decided that the bronze should be rowed off between the semi final losers France and Norway. The race was never undertaken so most historians record Norway as the bronze medallists with the fastest semi final time.