Competition between Australia and New Zealand was held for the first time in 1888 and has been strong ever since. This chapter provides some background to this racing and the events that have been conducted.

By the 1960s regular competition could be arranged in a fashion agreeable to both countries. The advances in equipment and racing at the start of the 1960s forced both Australia and New Zealand to race each other more often. In 1961 the first official test series between the two countries was held in New Zealand with a return visit to Australia in 1965. The competition was aimed at the elite level but with both countries aiming for the World Championships, the opportunities to continue the contest at that level became more difficult to organise. Thereafter development regattas were utilised to improve the standard of racing of both countries.

The series with the longest and continuing life is named in honour of the great New Zealand and Australian coach Rusty Robertson. 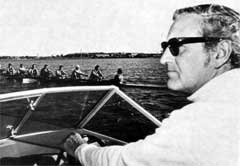 Rusty commenced rowing at the age of 16 at the Oamaru Rowing Club in New Zealand. A serious car accident which broke his back force a premature retirement from rowing and an early start to coaching. He coach Oarmaru crews for many years and was Club Captain for a decade. His Oamaru coxed four won the New Zealand Championships and was selected for the 1962 Commonewealth Games in Perth. His international career started with Gold at this regatta. By 1967 he was a National selector and coaching New Zealand crews internationally. His 1968 Olympic coxed four won gold and Rusty was one of the most respected coaches in the land and one of the world's foremost rowing coaches. He was a successful New Zealand coach before being lured to Australia in 1976. He coached gold, silver and bronze medal winning New Zealand crews at World Championships and Olympic Championships in the coxed four in 1968 and the eight in 1972. He died in 1990.

In 1965 the Ampol Trophy was presented by that company to help promote the competition and thus became the first sign of sponsorship towards the Regatta. Points were awarded for Australian and New Zealand at each of the International Test Regattas in the eights, coxed four, coxless four, coxless pair, doble scull and single scull.

In 1972 a series was originated for under 21 rowers and was called the "Colts" Series. This then became an under 22 series in 1980 and a under 23 series in 1982. It also changed names from "Colts" to "Senior Bs" and more recently "Under 23s" to coincide with international nomenclature at the times. The Colts series commenced in 1972 with New Zealand crews competing against New South Wales crews initially every alternate year and currently every year, with visits on a reciprocal basis. The Colts crews were originally male heavyweights but progression was quickly made to women and lightweights. Occasionally other States participated.

The Union Salver was presented by the Union Shipping Co Ltd in 1981 for competition initially between Australian States and New Zealand eight oared crews. In 1983 representative Australian and New Zealand crews raced and this trophy continued to be used until 1990 as the point score trophy for competition over all events. In 1990 the Rusty Robertson trophy was inaugurated as the overall points score trophy for the competition in memory of the late Rusty Robertson, famed coach of both Australian and New Zealand crews, who died in 1990. Points for the series are allocated on the basis of 2 points for the first crew from either country and 1 point for the losing crew in each race, with the priority events carrying double points. Only the first crew from each country is eligible for points.

By 1995, it was deemed that competition at the Nations Cup would produce greater benefit for the enormous sacrifice being endured by the rowers with interstate moves. An under 22 regattas called the Australasian Regatta was commenced with state based crews against NZ crews. In addition to the Rusty Robertson Trophy Australia v New Zealand, a new points score trophy between the States was inaugurated as well.

The Trans Tasman series continued its evolution in 2002 into the Youth Cup between Australian States and teams from the North and South Islands of New Zealand. The Rusty Robertson Trophy was still awarded on an Australia v New Zealand basis in 2002. However in 2003 and beyond the Rusty Robertson trophy is awarded to the team with the greatest number of points at that regatta.

The key objectives of the regatta revolve around competition and motivation. These are summarized as:
1. provide a high standard of competition for young developing rowers which provide a pathway to elite level rowing
2. motivate young rowers to remain committed to excelling in rowing through opportunity to represent their State (or NZ) in a national competition and through opportunities to interact collegially with fellow athletes and national representatives.

From 2003 all crews from all divisions receive points toward the final pointscore for the Rusty Robertson Trophy. Each team has a Mens 8+ and a Womens 8+ with all rowers competing on each of the three days of the regatta in various boats. In 2003 Victoria won the overall pointscore.

Winners of the Union Salver

Winners of the Rusty Robertson Trophy

Index to this section 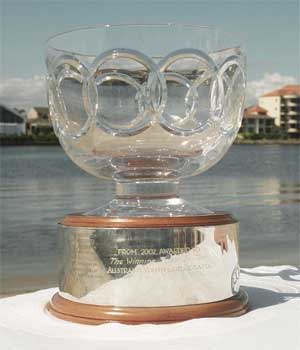 The Rusty Robertson Trophy in Adelaide in 2005

This series commenced in 1984 with a series of racing soon after the National Championships for school or junior crews. Crews other than the representative crews, were also encouraged to compete. The City of Devonport Trophy for point score winner was first presented in 1990.

Winners of the City of Devonport Trophy