Competition between Australia and New Zealand was held for the first time in 1888 when a Napier Rowing Club from Canterbury, representing New Zealand, competed for the inter-colonial championships in Sydney. The race was part of an attempt to send an Australasian crew to Europe. The Victorian crew were winners with NZ second, NSW third and TAS fourth. Alas no agreement could be reached on the terms of the tour. A conference of Australian States and NZL was held that night.

Three years later W J Bridson, from Wellington New Zealand won the Amateur Sculling Championship of Victoria on the Lower Yarra. In 1896 W J McCormick from New Zealand came third in the Intercolonial Sculling Race and a four from NZL finished second in an intercolonial fours race despite having to withdraw two oarsmen deemed to be professionals - they were fishermen.

Perhaps the best of the early racing between Australian and New Zealand was conducted as part of the inter Allied Army racing in Europe whilst awaiting repatriation back to Australia after WWI. Whilst the Australian AIF crew won the King's Cup at Henley, the NZL Army crew won the International Eights at Reading, Puney, Kingston, Walton, Hammersmith and Marlow. Further and perhaps more importantly, they won the eights at the Allied (Pershing) Games in Paris defeating the Australian crew (after some changes from the Henley crew). Readers are referred to the more detailed account in the chapter on 1919 Peace Regatta.

Australians and New Zealanders were dominant in professional sculling with NZL producing World Champions of the like of Richard Arnst and Darcy Hadfield and Australia many others. Hadfield won many Inter Allied races after WWI including the Allied Games in Paris where he defeated professional Australian Alf Felton who later won the World Championships in the UK in the same year.

In the 1920s and 1930s New Zealand crews raced in both Sydney and Melbourne with great success. There were great races such as when crews from London Rowing Club (UK) and the Wanganui Union (NZL) raced in the Grand Challenge Cup at Australian Henley in 1934 and at the Victorian Centenary Regatta. The International crews swept the Australian crews aside.

(The following was extracted from the 1965 Ampol Series programme.)
The last pre-World War II rowing clash between the two Nations came with the invitation for an Australian crew and Sculler in 1939 to tour New Zealand and compete in the Centennial Games in Wellington. The NSW crew stroked by Lance Robinson, (who has played a major part as advisor and assistant to Australia's coach, Owen Ruffels in the preparation of the 1965 Eight) and coxed by Bill Kerr, won the New Zealand Champion Eights to become the first overseas crew to win a New Zealand Championship. Two of this crew, Brin Jay and Terry Gordon Classford were killed in action while serving as pilots with the RAAF over Europe. The All Blacks had their revenge in the Single Sculls, when Bob Smith defeated the 16-year-old Kevyn Webb, in the New Zealand Sculling Championship.

As with oarsmen after the first World War, it took several years to start International events between the two countries. Unlike World War I however, service crews at the close of the war did not have the same opportunity to race. RAAF Eights raced at Henley and other Regattas in England, NZ Army crews raced in Austria and Italy, and during the war itself, an AIF Eight stroked by Vic Mossong, won the Champion Eights of Palestine.

In 1948 however New Zealand accepted an invitation to send an Eight and Sculler to Australia. The Aramoho Boat Club represented by D Morrison, W James, J Brown, W Carroll, J O'Brien, L Clarke, T Preator and Ted Johnston (stroke), who won the NZ Champion Eights, at both Picton and Port Chalmers, and the Aramoho Sculler, Joe Schneider, who was also the New Zealand Champion, arrived to race in a series of three Regattas. Haberfield, holders of the Australian Championship (one change from the crew that won the King's Cup in Hobart) won the first, Aramoho the 2nd, and in the NSW Champion Eights, the New Zealand crew clinched the series, to win the title by 6 feet. The Sculls were divided, Joe Schneider winning at Haberfield (after a dramatic race in which Kevyn Webb leading by 1 1/2 lengths tipped from his boat in a wash only 10 feet from the finish. Webb won from Wood and Schneider in the International Sculls at Sydney Regatta, from Schneider and Ron Rawlins at the Metropolitan Regatta, with the Olympic and World Sculling Champion, Merv Wood, coming back in the final race for the NSW Championship, to win by 1 length from Schneider and Webb who finished together.

The 1950 Games at Lake Karapiro was all Australia, 4 Gold Medals and 1 Silver from 5 starts. The great Eight-oared race went to Australia by the narrow margin of three feet, this first ever Gold Medal Australia Eight was boated: Bob Tinning (bow), P Cayzer, AP Holmes a Court, B Goswell, RL Selman (in 1965 Secretary, NSWRA), E O Longley, E O Pain, A W Brown (stroke), J E Barnes (cox), and Bill Thomas (coach). Merv Wood scored his great double, first in the Singles, over Tony Rowe of England and Tris Hegglun, NZ, then with Murray Riley in the Double Sculls. Australia's fourth great victory went to Wal Lambert and Jack Webster (both of whom has represented Australia in the fours at the 1948 London Olympic Games) over the New Zealand crew of brothers D C and A H Gould of the Avon Rowing Club. The Aramoho Boat Club four, all of whom had been in Australia in 1948, saved the day for New Zealand with a win over Haberfield, in the Coxed Fours. Coxed by Col Johnstone and coached by D Holmes it was W Carroll, W James, J O'Brien and Ted Johnson (stroke).

1951 was one of Australia 's greatest rowing years. An invitation had been received for a full rowing representation at the Canterbury Centennial Games, to be held at Kerrs Reach, Christchurch. The University of California coached by Ky Ebright, one of the World's Greatest Coaches, (he coached the Gold Medal Eights for USA, in 1928, 1932 and 1948) had also been invited. The impressive string of victories on this tour, consisted of International Eights, (Australia boated: R Tinning, D Anderson, D Palmer, N Greenwood, M D Findlay, E O Pain and Phil Cayzer (stroke), and Tom Chessell in the dual role of Cox and Australia Coach), and the Champion Eights of New Zealand, at Akoroa. The International Pairs, Ernie Chapman and Vic Middleton, at Christchurch, and a repeat of the Eights great double, by Norm Cannon and Kevyn Webb, who won both the international Double Sculls, and the New Zealand Championship, also at Akoroa. Reg Douglas of Mercer Club, gave notice of the start of his own great rowing career, by winning the international Single Sculls.

Australia and NZ did not clash at Helsinki Finland at the 1952 Olympic Games, when Australia gained a bronze medal in the Eights, and Wood a Silver Medal in the Sculls. But at the 1954 Commonwealth Games in Canada they did. A year earlier the West End Crew, K Ashby, W Tinnock, M Ashby and L Culpan had won the NSW Champion Fours during a brief Australia tour, and Don Rowlands had amazed the rowing world, by his defeat of Peter Evatt and Mervyn Wood in the Champion Singles. At Vancouver the score was two all. Rowlands repeated his Australia victory over Peter Evatt, and the great pair crew, five times Champions of New Zealand, Bob Parker, and Reg Douglas of the Mercer RC, defeated England & Australia, Williamson and Anderson, Merv Wood and Murray Riley, won the Double Sculls and Australia's Coxed Four (a combination of our small boat oarsmen) won a spirited final from New Zealand.

In the Melbourne Olympics, Australia came out best with five crews in the final four. NZ failed to make a final. Although we did have the example of Douglas and Parker, defeating the Australian pair, M Grace and P Raper in a heat, to miss the final, by being defeated in the semifinal. Grace and Raper going on to take fourth in the Olympic Pairs. Stuart McKenzie on the start of his six months world rowing tour in 1957 started his grand slam of that year, which included the Diamonds at Henley England, and the European Championships in Germany, by winning the New Zealand Single Sculls Championship, from Don Rowlands on Lake Karapiro.

For the next clash Australia and New Zealand travelled more than 12,000 miles each, to remote Lake Padarn in North Wales in 1958. Taking the Australia v. New Zealand results only McKenzie defeated Hill in the Singles. Wood and McKenzie defeated Jim Hill and the late Norm Suckling in the Doubles. Parker and Douglas retained their Empire Pairs title defeating K Webb and S Roll, and Australia defeated New Zealand (3rd and 4th) in the Coxed Fours event. In AustralianNew Zealand rowing relations, the largest club party ever, of 38 Haberfield oarsmen, toured both the North and South Islands of New Zealand in early 1958, racing at Auckland, Hamilton, Wanganui, Wellington and Christchurch. Only major events won, were by Tan Tutty and Kevyn Webb, who won several Double Scull events.

With the withdrawal of Stuart McKenzie from Australia's Olympic Team in Rome, the last chance of Australia meeting NZ in 1960 passed. Jim Hill did go on to race in the Olympic Single Sculls final, and just fail to gain a Bronze Medal for New Zealand. This Olympics showed vast advances in both speed and training methods, and thinking officials in both our countries, agreed that more International racing was needed if we were to catch up.

And so to Tokyo and the 1964 Olympic Games. Murray Watkinson, the N.Z. Sculler for this tour, gained fifth in the Olympic Singles Final to finish ahead of Australia 's Peter Edwards. In the row off for the minor places, 6th to 12th, the Australian Eight defeated NZ and even up NZ Coxed Four, defeated Australia.

(The following was extracted from the 1965 Ampol Series programme.) 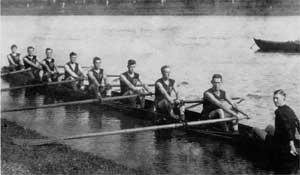 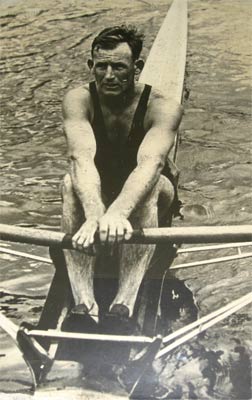 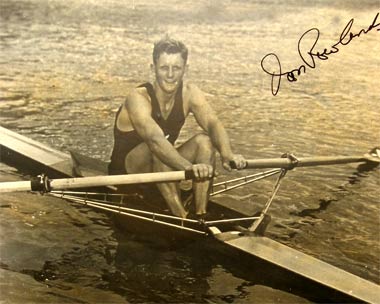 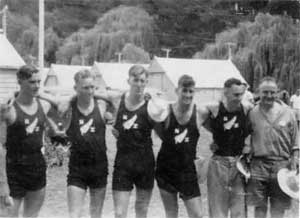 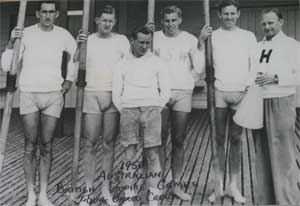