This History was published in 1981 as part of the Club's centenary celebrations and was compiled by Mr Ron Harvey. We thank Bundaberg Rowing Club for allowing this history to be reproduced on this site. 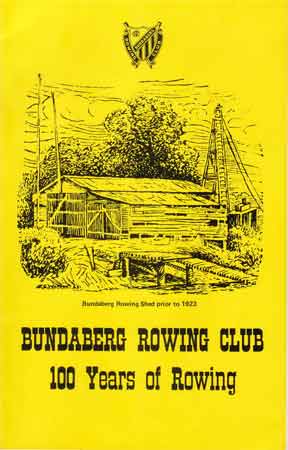 The origin of an official rowing organisation in Bundaberg is not clear, because records are scanty, but there is support for selecting 1880-81 as the time.

A search of local publications reveals that a meeting was held in November, 1880, at which plans to form a Burnett River boating club were discussed. A teacher, Mr. P. Rocks, was named as one of those present.

It could well be that this effort, like several others during the subsequent quarter of a century, was short-lived, a club being established and then virtually disbanding for lack of continuing support.

There certainly is a record of a regatta early in 1881, during which races were conducted in long boats which held four seats. These boats also carried "leg o mutton" sails, which were used early in the race and then lowered as the crew took to the oars. A boat of this type remained in the possession of a Mr. W. Watson, of North Bundaberg, until after World War I.

Combined sailing and rowing regattas had been held as early as 1875, however, the Empire Day holiday in May being a popular day for such celebrations. An early issue of the Bundaberg and Mt. Perry Mail in 1876 recalls the 1875 regatta during which money prizes - the biggest being £8 - were offered for four-oared races.

Mr. Samuel Johnston, owner of Bundaberg's first sawmill at Waterview, was the starter and Mr. Horace Burkitt, Bundaberg's second Police Magistrate and Sub-Collector of Customs, was the judge.

The 1878 regatta day on the same holiday was unfortunate for the sailing skiffs, as the absence of a breeze prevented these events being conducted, and they were postponed until the following Saturday. The Mail's report gave the winner of the farmers rowing race, for which a £2 prize was given, as Davis, and that a lad named Johnston won the boys' race. This presumably was Mr. Samuel Johnston's son Jim, who 12 years later won the Queensland Sculling Championship race.

A Mr. G. H. Bennett was Secretary and Mr: G. T. Bell Treasurer of the committee which organised the regatta. Mr. Johnston again was starter.

Apart from a reference to the 1881 regatta the record for the following decade is a blank, but in 1888 there were strong moves to place the sport on a sounder tooting. At a meeting in June the Bundaberg Boating Club was formed and Mr. Rocks, who had become the first head teacher of East State School when it opened in 1886, was named Secretary. Then came the initial move to erect a riverbank shed in which boats could be housed.

Headed by two country oarsmen, Messrs. E. Lambert and J. Callaghan, a committee raised funds and the money was sufficient to build a rowers' shed on the western bank of Saltwater Creek close to the site of the existing Rowing Club and Rowers Association Club premises. Mr. John Fleming Snr., head of the family concern which established the Bundaberg Gas Company four years earlier, was Patron of the Boating Club.

The only existing account of the big Burnett River flood of January, 1890, does not reveal the fate of the rowing shed, although most other river bank structures on both sides of the Burnett, were washed away or damaged. On the Empire Day Holiday that year, however, a Bundaberg crew went to Maryborough for what was described as the first inter-city regatta. The crew did not take its own boat and borrowed one from the Maryborough Club.

One accepted account of the day's activities reported that at their first attempt to handle the strange boat the Bundaberg oarsmen capsized. However, after some further practice, they contested a race against their hosts and were successful.

The four men who thus placed their names on the Club's Official Records were H.Fortey, H. Mycock, S. Byrne and R. Harvey.

This was the day when, at the same regatta, young Johnston won the Queensland Sculling Championship.

In the possession of the Bundaberg Rowing Club today is a letter from Mr. Jack Sullivan, of Maryborough, who recalled a regatta held in Bundaberg during 1891 at which the Fours Championship was won by a Bundaberg crew consisting of H. Fortey (stroke), John Fieming (bow), John Saint and Jim Johnston.

Another regatta was held in 1892 but the disastrous flood of 1893 brought a halt once more to organised rowing activities. The Club's boats were removed from the shed as the floodwaters rose, but the official record states only that they were "never returned". Twelve years were to pass before organised rowing returned, but it was a significant advance because from then flowed the truly remarkable history of success for Bundaberg Rowing Club.