In this chapter you will find details of Australians who have raced in this event and the results over time.

Australians who have competed in this event

A brief history and Results 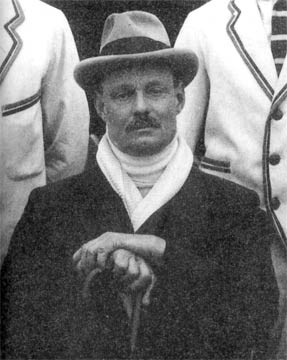 Photo from The Story of Rowing by Christopher Dodd 1992

Some of these post graduate Australians were Rhodes Scholars and included:

1983 Oxford crew with Graham Jones in the six seat

More recently in 2003-4, Kris Coventry was a Gates Scholarship holder. 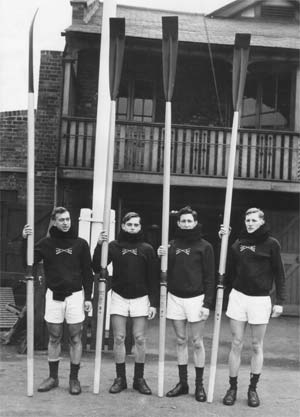 The four Australians in the 1954 Oxford crew 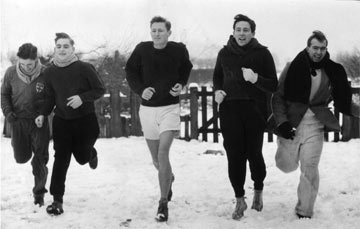 T D Warner in 1868 appears to be the only Austraian to have coxed a crew in this event.

There are of course many Australians who raced for these universities but did get to race in the event.

There are also rowers who have competed in The Boat Race and have subsequently worked or live in Australia. Those known to the author are:

Chris Dodd in his book The Oxford and Cambridge Boat Race London, Stanley Paul, 1983 makes it clear that the Australians at Oxford usually have made an influence much greater than the numerical strength would indicate.

He devotes a whole chapter to Stuart Mackenzie's brief and sensational career as coach at Oxford. Steve Fairbairn who revolutionised English rowing in the 1920 and '30s is of course prominant. Rod Carnegie's re-organisation of OUBC in the mid 1950s is mentioned as is the Presidency of OUBC of Andrew Michelmore.

Hylton Cleaver in his book A History of Rowing also mentions Carnegie as follows: In 1957 R H Carnegie revolutionized Oxford's rowing policy and came very close to a victory over Cambridge. This involved the introduction of shovel style blades well before other crews. Unfortunatley for Carnegie, one of his crew found the race too much for him and required the other seven to row most of the course without this rower. The picture below shows Oxford after the finish with Carnegie in the seven seat with hand on chin contemplating what might have been. 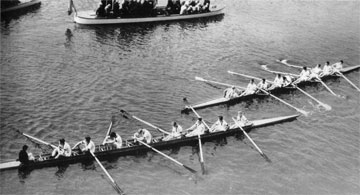 1957 finish with Carnegie in the seven seat

Photo from A History of Rowing by Hylton Cleaver, 1957

To the knowledge of the author, the following Australians were elected President of their respective boat club: 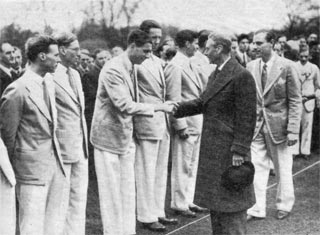 Another noteable Australian who competed for Cambridge was former Prime Minister Stanley Bruce in 1904.

As mentioned above, Stuart Mackenzie coached at Oxford. More recently Tim McLaren has been prominant in the coaching team for Cambridge and Michael McKay has assisted Oxford.

The conclusion is that there is a continuing interest in this event in Australia.

The following history comes from The Boat Race website: www.theboatrace.org

Founded in 1927 but only raced intermittently until the mid-1960’s, the first women's race was held on the Isis in Oxford, with (according to The Times) “large and hostile crowds gathered on the towpath” as the men objected to women rowing.

The first few races were not decided in a side-by-side contest but were judged on “time and style"; the two crews were not allowed on the river at the same time!

From 1935 the races became proper contests over 1000 yards or a 1/2 mile, on either the Cam, the Isis or on one occasion on the Tideway at Barnes.

Initially the Cambridge rowers always came from Newnham College, at that time exclusively female. Later, with the official founding of CUWBC they were also joined by students from Girton. However it was Oxford who enjoyed early success, winning the six races held between 1930-41.

The next page list all those Australians who have competed in the Oxford and Cambridge Boat Race and a further page provides a list of results for this event since 1829.

> next Australians in The Boat Race

Australians racing in The Boat Race