However it was not until after the formation of the Victorian Rowing Association in 1876 that consideration was given to formalising Victorian Championships. By 1888, such annual Championships were established and were the most important rowing events of the year.

The women's Championships were generally conducted over 1000m until the change at the international and interstate levels to 2000m in the mid 1980s.

Image from John Lang's The Victorian Oarsman and Rowing Register, 1919 Massina and Company 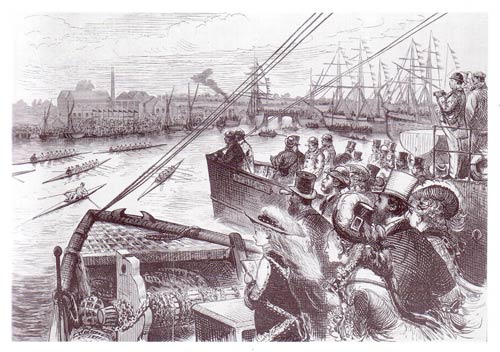 The crews approach the finish near Queen's Bridge in the 1880s

The senior and underage Championships are now conducted over the Olympic distance of 2000 meters.