Of note this year was James Barton from Richmond continuing his winning ways in the scull and Mercantile commencing its resurgence taking out the four oared Championship.

This event was held on the same day as the Eight-oared Championship, 12th March, 1921, over the 2 ½ mile course from Footscray to the Williamstown Ferry. Five entries were received, Mr J. Barton, of Richmond Club, being the winner. Mr. Barton is congratulated on repeating his success of the previous year.

This event was rowed on 15th January, 1921, over the straight mile course, finishing at Victoria Dock. Ten entries having been received, it was necessary to row the race in heats, the first and second in each heat starting in the final. After a great race Footscray defeated Albert Park by a foot, with Mercantile third, and Civil Service fourth.

This event was rowed over the 2 1/2 mile course from Coode Canal on 13th November, 1920, and resulted in a win for Mercantile by five lengths from Banks. This was Mercantile's first win since 1906 when Alex Sloan stroked the crew. This year Sloan's nephew J L Mounsey stroked the winning boat. The Mercantile crew were never in any doubt taking 6 lengths by the mile.  The interest in the race was with second place. The Banks crew had the less favoured station and at times was as far back as fifth. "Outrigger" reported in The Age that their last mile and a half contained some plucky rowing. 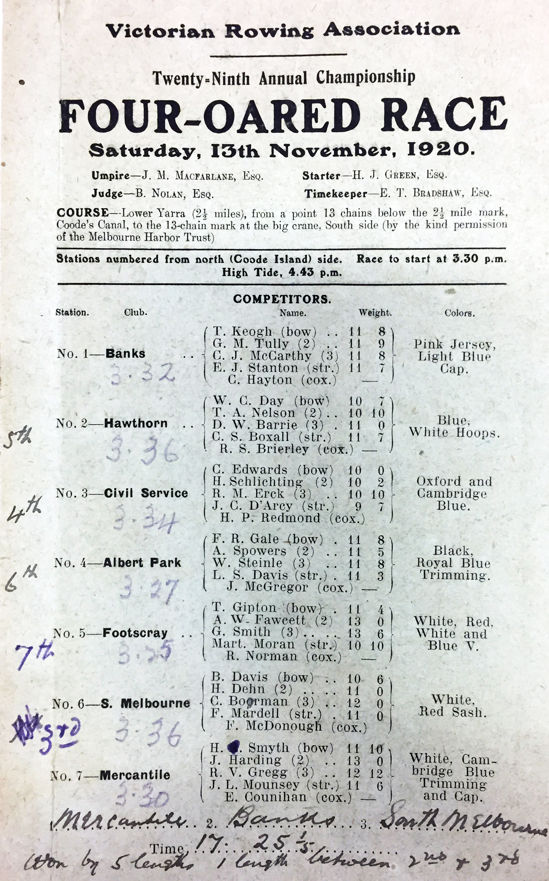 This event was rowed on 12th March, 1921, the record entry of ten crews being received, the previous record being seven crews, in 1920. Your Committee decided to revert to the lower course from Williamstown Ferry to Footscray, and engaged the s.s. “Rosny” to follow the race. There was a great demand for tickets, many applicants having to be refused. The sight as the ten crews raced off the mark was magnificent. Through faulty steering by some of the coxswains, a foul occurred, and the race was stopped after going a quarter of a mile. After re-starting, faulty steering again caused clashes, practically every crew being affected. This did not prevent a splendid race, in which Civil Service snatched the victory from Mercantile by three feet in the last few strokes, Corio Bay finishing third, a length behind Mercantile. Civil Service are congratulated on their splendid win.

Time: Not known
Margin: One length

The unofficial Women;'s Championship fours continued at the Henley-on-Maribyrnong regatta on 5th February 1921. This year the newspapers referred to this event as the Ladies' Championship Fours of Victoria.