An Historical Study by Peter Bond 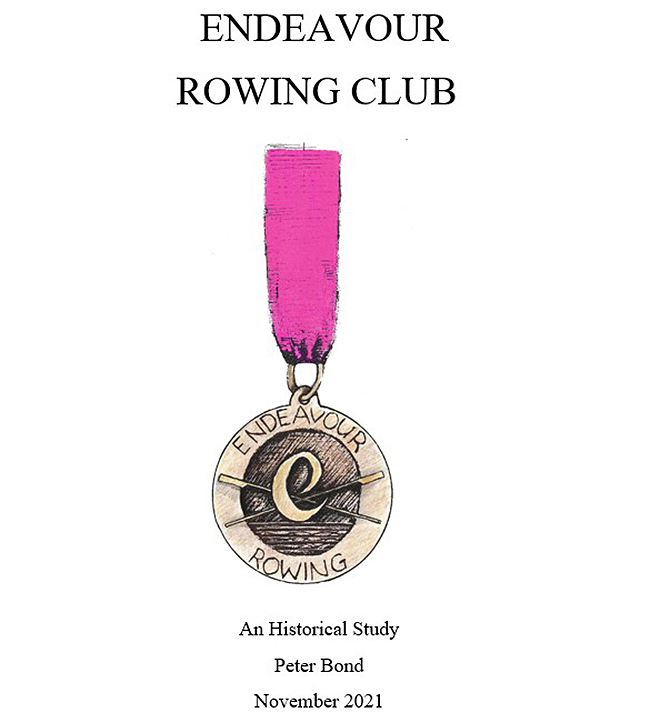 This history of the Endeavour Rowing Club by Peter Bond has been reproduced here with the kind permission of the author.

Rowing clubs existed on the Hunter River in Maitland for limited periods of time from 1883 to 1890 and from 1923 to 1931. Following this, there was little rowing activity on the river for 40 years until Maitland Boys High School conducted a short lived rowing program at Morpeth during the 1970s. A long lasting rowing program was finally established by Hunter Valley Grammar School in 1991. For four and a half years, the school’s crews rowed on the dam at Walka Water Works before relocating to school owned land on the Hunter River at Berry Park. The driving force behind the HVGS program was Digby Rayward, a member of the school board who saw rowing as an activity that would enhance the prestige of the school.

In 1993, the HVGS Rowing Supporters Group was formed among the parents of the student rowers to raise funds for the purchase of boats and to establish a rowing site on the Hunter River. Members of this group were instrumental in locating the land at Berry Park and facilitating its purchase which was finalised in February 1996, as well as coordinating the supply and construction of the boat shed which was completed in time for the first regatta at the site in the following October.

From time to time, the Rowing Supporters had discussed the concept of non-school rowers from the local community being involved in the sport. With the new boat shed providing the room to cater for more boats and rowers, the proposal of a community club was presented to the school board and approved in November 1997. The name chosen, Endeavour Rowing Club, was derived from the school motto “Success through endeavour”. 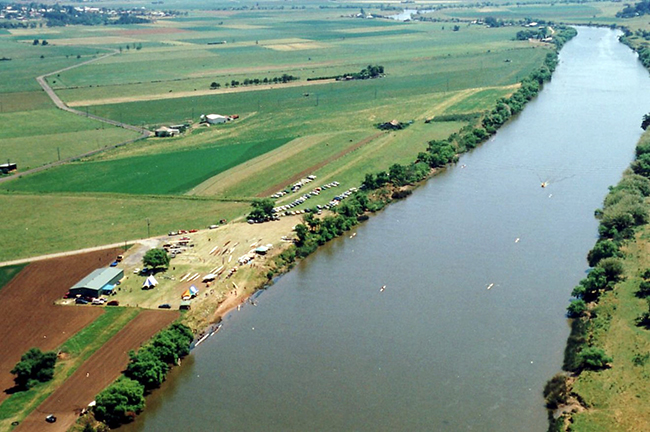 The Club is Established

Endeavour Rowing Club was formalised at the club’s inaugural meeting on 10/5/1998 where the foundation committee was elected: president Clive Carlstrom, vice president Les Geczy, secretary Digby Rayward and treasurer Stan Grzanka. At the following meeting in June, the club colours were accepted as magenta and white with black shorts. At this meeting the club had 11 members and $880 in the bank.

Initially, Endeavour had the use of several unused HVGS boats including two tub fours. The tubs soon took on a new appearance, being painted magenta, the colour chosen by Peter Wyper because he had plenty of surplus tins of magenta in his retail paint store. The club was allocated racks on one wall of the HVGS boatshed which slowly filled as members acquired their own boats.

Endeavour Rowing Club became a member of the Central Districts Rowing Association [CDRA] as an ‘associated club’ in May 1998.

Preparations for the club’s first racing season were interrupted in early August 1998 when, after a fortnight of heavy rain, the Hunter River broke its banks and flooded the boatshed. The shed was isolated in a sea of water, a kilometre from the nearest dry land. As the flood level rose, Endeavour members and the HVGS rowing co-ordinator battled through the water to the boatshed with the help of a tractor. Everything was raised from the floor with as many boats as possible being moved onto the upper racks. Several boats were loaded onto the school boat trailer which was hitched to the tractor and towed to higher ground.

Although the surrounding roads remained flooded for a week, the water receded from the shed after four days. A clean up team was carried in by an SES flood boat from Morpeth. The water had been half a metre deep in the shed and had left behind a 5 centimetre layer of slimy mud which was cleaned out with brooms and hoses. By the time the rowers could return to the shed, one month of training had been lost due to rain and flood. 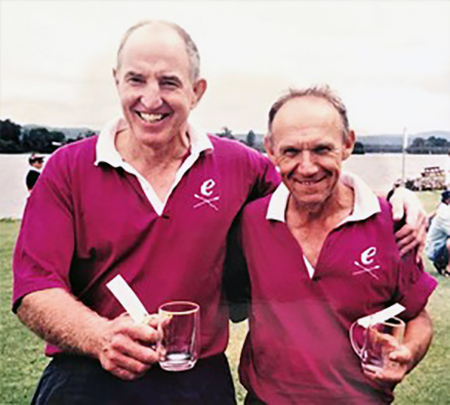 During the 1998/99 season, their first season of racing, Endeavour rowers attended six CDRA regattas. Endeavour boats were transported on the HVGS trailer and HVGS boats were used in many races. At this time, the majority of Endeavour members were parents of HVGS rowers with several races seeing parents competing against their own children. In February 1999, Endeavour Rowing Club celebrated their first win in competition at the CDRA Championships in Taree when Stan Grzanka and Digby Rayward crossed the line first in MN2x.

There has long been contention between the men and the women of Endeavour Rowing Club as to who can claim the first trophy. At the Armidale regatta in January 1999, the womens crew of Jill Carlstrom, Lyn Rayward, Marilyn Hyde and Bev Holden with coxn Jenny Geczy competed in the Veteran Four event. At that time, Masters events (then labelled “Veteran”) at CDRA regattas included both sexes, women racing against men with a time handicap. The Armidale club had engraved medals for both men and women veterans. As the only womens entry, the fourth placed Endeavour crew were presented with the VW4+ medals. Thus the women brought home the first medals but the men had the first win although their trophies were glass mugs rather than medals.

After the first year of competition, the restrictions of two rowing clubs operating together were apparent. Congestion in the boatshed resulting from an increasing number of boats necessitated a re-organisation of the boat racks and restrictions on the spaces available on the boat trailer prompted Endeavour to plan for a boat trailer of their own. 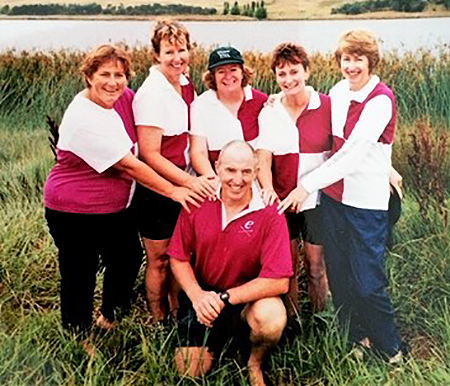 At Endeavour’s first annual general meeting in May 1999, the club felt that they had achieved all they could have expected from their first year of operation with a successful season of competition and full membership: “We grew to our breaking limit of over 20 members and 10 intending members”. The meeting resolved to apply for a regatta in the coming racing season, subsequently being granted a CDRA regatta on 13th Feb 2000. The newly created role of Club Captain was added to the club executive.

For their second season of competition, the club had a boat trailer built. Endeavour Rowing Club attended 7 CDRA regattas in 1999/2000. The club’s inaugural regatta on 13th February was cancelled before any races could be run due to strong winds. The rescheduled Endeavour Regatta was successfully conducted on 16th April with the club’s sole winner being Digby Rayward in MN1x. After only 2 novice wins at CDRA regattas, the club stepped up for the last regatta of the season.

Although the winners of the club’s first trophy has been endlessly debated, there is no doubt as to the club’s first state championship medal. This was a bronze medal to Jill Carlstrom, Marilyn Hyde and Bev Holden who raced with Margaret Vercoe of Newcastle and coxn Johanna Clapper of HVGS for third place in WMD4+ at the NSW Masters Championships conducted at SIRC in May 2000. 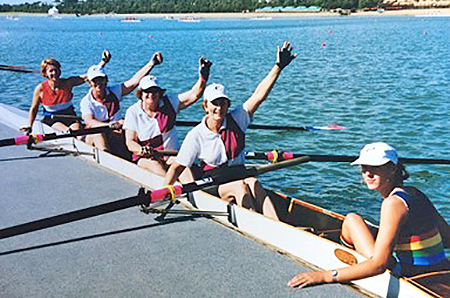