An Historical Study by Peter Bond

As a response to legislative changes in 2009 and 2016, a constitutional sub-committee recommended a revision of the constitution to be structured as closely as possible to the Model Constitution issued by the Department of Fair Trading. This was undertaken by Peter Bond and the revised constitution and objects were adopted unanimously at a special general meeting in December 2018.

The twenty first season of racing was a quiet one for Endeavour up until the two masters championships at the end of the regatta calendar. The club attended 18 regattas for 46 wins, the lowest total in 9 years, due largely to the loss of the junior squad. All of the juniors who had swelled competitive numbers in 2013 had since graduated from school with only two staying on as senior members. The standout performers were Sean Donza with 23 wins and Allen Atkins with 10, who between them won 9 masters championships at the state and national level. Sean was selected in the NSW masters representative quad for the second time to compliment his tally of 4 masters gold medals (2 state and 2 national). For the second year running, Al was a winner at the Head of the Yarra in the ‘Ancient Mariners’ eight, which he followed up with 5 masters gold medals (3 state and 2 national).

A significant incident during the racing season was the mini-cyclone that hit the CDRA Championship regatta on Saturday 9th March, ripping through the boat park and tearing the roof off the Manning River club house. Endeavour escaped relatively lightly with a single scull smashed into 3 pieces and several holes from flying debris in a quad. Other clubs were not as lucky with Newcastle Grammar having over half their fleet damaged, most beyond repair.

To make up for the loss of juniors, the club responded to an approach from Maitland Christian School to conduct rowing coaching during school sport time for Terms 4 (2018) and Term 1 2019). Ten Endeavour members assisted with this training but, although being of benefit to the school, there was no flow-on to junior club membership and the program terminated.

At the end of season presentation, Endeavour Awards for Rowing Achievement went to Allen Atkins and Sean Donza with Outstanding Service medals to Reg Vaughan and Owen Redhead.

During recent CDRA racing seasons, a significant proportion of the boat race officials at every local regatta had been from Endeavour with Peter Bond officiating at 50 of the 51 regattas over 5 years and Les Geczy at 45 while new Endeavour members Matt Patton (21 regattas), Peter Bowman(18) and Sue Philpot (11) made notable contributions.

The 2019/20 season was the club’s quietest in 15 seasons of racing with only 13 regattas attended for 26 wins. Endeavour’s double regatta weekend at Berry Park in February, jointly hosted with Lake Macquarie, attracted record entries giving 203 races over the two days. However, predicted temperatures over 40º caused many withdrawals resulting in re-draws totaling 70 races. The regattas started at 8.00am on both days but neither lasted more than an hour and a half with racing cancelled as the temperature climbed past 38º. At the Sydney regatta the following week, Sean Donza gained his third selection in the NSW state masters quad although he was denied the chance to compete.

With the easing of government restrictions, rowing re-commenced from the Endeavour boatshed on 20th May with boat use limited to single sculls. Eight weeks later on 15th July, crew boats were approved in line with Rowing NSW’s guidelines.

The 2020 CDRA annual general meeting set a regional racing program of 13 regattas. Of the 9 events scheduled before Christmas, 7 were cancelled due to corona virus and 2 were conducted with reduced programs under covid restrictions. After New Year, the Taree Summer Regatta in January was cancelled and the remaining 3 regattas were conducted with entries restricted to CDRA crews only.

During the 2020/21 season, Endeavour attended 13 regattas for 38 wins. 8 regattas that the club had planned to attend were cancelled due to corona virus. Endeavour’s Henley-on-Hunter regatta in September was one of those cancelled although the Endeavour regatta in February did proceed. The season culminated in 4 gold medals at the National Masters Championships, 2 to new member Lindy Nesbitt and one each to Sean Donza and the recently returned Chris Brennan. Sean also wore the blue of NSW in the Interstate Mens Quad Scull although the crew was unplaced.

In February, new zoot suits arrived in time for the second half of the racing season. The original design of magenta and white quarters was replaced with a predominantly magenta zootie with black and white trim.

A week after the CDRA Championships in March, torrential rain caused the river to break its banks, leaving a heavy deposit of mud on the beach and boat ramp. As machinery was needed to clear the bank, the opportunity was taken to remove previous deposits of flood silt to give a uniform slope down to the river. A flood recovery grant of $10,000 from the state government in August enabled the earth works to proceed and turf to be purchased to complete the repairs.

10 Weeks Closure Due To Covid

In response to covid limitations imposed by the state government, rowing was restricted to single sculls on 28th June. All rowing was cancelled and the shed was closed on 6th August when the government shut down all activity in the state due to the increase in covid infections. The Maitland local government area was put under “stay-at-home” restrictions.

The Endeavour annual general meeting, due to be held on 6th August, was put on hold. The AGM was eventually conducted via email with Al Atkins confirmed as a life member of Endeavour Rowing Club.

On 21st September, members were permitted limited access to the shed with their own key to use single sculls although the shed remained closed.

The boatshed finally reopened on 14th October with the condition that all attendees log in via QR code and be double vaccinated. Rowing in crewed boats was approved without restrictions.

A welcome back BBQ was held in October at which Endeavour Awards for Achievement were presented to Sean Donza, Lindy Nisbett and Chris Brennan, and Life Membership was presented to Al Atkins.

With the 2021/22 regatta season set to begin, covid restrictions delayed the start of racing. The first 6 regattas of the CDRA regatta season were cancelled as were the first 3 months of the Rowing NSW calendar.

Endeavour’s racing squad finally got to compete at the Three Rivers Mini-Marathon hosted by Port Maquarie in mid-November which had twice been postponed from August.

At the time of writing, regular regattas seem set to commence in December 2021 although all future sporting activites are uncertain due to the potential threat of covid closures. 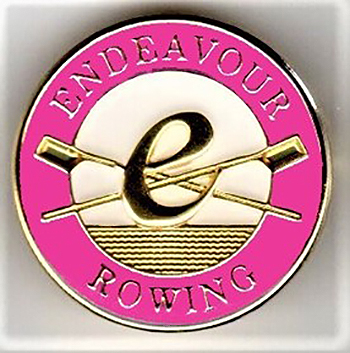