The following brief history of the race, results and chronology comes from the website www.theboatrace.org and is reproduced with permission.

The idea for a rowing race between the universities came from two friends - Charles Merivale, a student at Cambridge, and his Harrow schoolfriend Charles Wordsworth (nephew of the poet William Wordsworth), who was at Oxford.

On 12 March 1829, Cambridge sent a challenge to Oxford and thus the tradition was born which has continued to the present day, where the loser of the previous year's race challenges the opposition to a re-match.

The first Boat Race took place at Henley-on-Thames in Oxfordshire and contemporary newspapers report crowds of twenty thousand travelled to watch. The race was stopped soon after the start and, following the restart, Oxford were clear winners. The event was such a resounding success that the townspeople later decided to organise a regatta of their own which duly became Henley Royal Regatta. After the first year, the early Boat Races took place at Westminster in London, but by 1845, when Westminster had become too crowded, the Boat Race moved six miles up-stream to the then country village of Putney. In 1856 the race became an annual event (excepting only the war years).

1829:
First Oxford and Cambridge Boat Race held on 10 June at Henley-on-Thames
1836:
Second race from Westminster to Putney
1845:
First Boat Race held on The Thames between Putney and Mortlake
1849:
Oxford won on a foul
1859:
Cambridge sank
1873:
First year the crews raced on sliding seats
1877:
The race resulted in a dead heat
1898:
The Cambridge crew was waterlogged but finished
1900:
Cambridge win by 20 lengths
1912:
The Race was scheduled for 31 March but both boats sank and it had to be re-run on 1 April
1915-19:
No Boat Races during the First World War
1925:
Oxford sank
1927:
First year the BBC broadcast a running commentary on The Boat Race
1938:
BBC Television covered The Boat Race for the first time
1932:
The course was cut short by one minute due to construction work on Putney Bridge
1940-45:
On 24 March, Oxford sank and the race was rescheduled for 26 March, when Cambridge won
1952:
Oxford won by a canvas in a blizzard
1954:
The 100th Boat Race. Oxford won 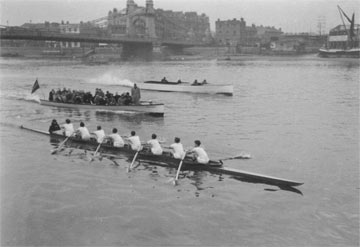 1976:
First sponsorship of The Boat Race, by Ladbrokes. Oxford broke the 17 minute barrier
1978:
The Cambridge Blue Boat sank
1981:
Sue Brown was the first female to participate in the race. She steered Oxford to victory
1982:
Hugh and Rob Clay were the first twins ever to row in The Boat Race
1984:
Cambridge wrote off their boat minutes before the start of the race
1985:
Henrietta Shaw became the first Cambridge female cox
1987:
The year of the famous Oxford mutiny caused by a number of top class American oarsmen who refused to row when a fellow American was dropped in preference for the English President, Donald Macdonald. Oxford, with Macdonald, won. Beefeater Gin became the official sponsor of The Boat Race
1988:
Dennis Thatcher presented the trophy to the winning Oxford crew
1989:
The first time both Blue Boats were coxed by women - Alison Norrish (Oxford) and Leigh Weiss (Cambridge). HRH Prince Philip, The Duke of Edinburgh, presented the trophy to the winning Oxford crew

1990
The record for the heaviest crew member ever to row in The Boat Race was broken by Chris Heathcote, weighing in at 17st 5lbs
1991:
HRH Princess Anne presented the trophy to the winning Oxford crew
1992:
Oxford beat Cambridge by one-and-a-half lengths in the closest race for twelve years. Matthew Pinsent, 1993 Oxford President, and Jonathan Searle, 1990 Oxford President, won gold medals at the 1992 Olympic Games
1993:
Cambridge won in the fourth fastest time ever, defeating a much favoured Oxford crew
1994:
For the first time in 21 years, Cambridge won two Boat Races in succession. His Royal Highness Prince Michael of Kent presented the trophy
1996:
Cambridge President, John Carver, watched his crew win the 1996 Boat Race from the launch boat, then picked up the trophy on their behalf from HRH Duchess of Kent
1997:
Steve Redgrave, four-times Olympic rowing gold medallist, presented the trophy to the winning Cambridge crew
1998:
Cambridge fielded the heaviest and tallest crew in Boat Race history. Both crews broke the course record with Cambridge winning for the sixth consecutive year in a course record time of 16 mins 19 sec. Beefeater Gin's sponsorship ended after 12 years
1999:
The Oxford and Cambridge University Boat Clubs signed a three year sponsorship deal with Aberdeen Asset Management. Cambridge broke their own record for the tallest crew, helped by Josh West, the tallest man in Boat Race history at 6'9"
2000:
Oxford won the 2000 Boat Race after seven consecutive wins by Cambridge. Matt Smith became the youngest oarsman to win the Boat Race. Of the 12 British oarsmen who won gold medals at the Sydney Olympics, five had rowed in The Boat Race
2001:
The 2001 Boat Race ended with a clear win for Cambridge, despite early clashes when Oxford were half a length ahead, then a restart after Cambridge bowman Colin Swainson lost an oar
2002:
Oxford won in one of the tightest races of recent history. Cambridge man Sebastian Mayer seemed to collapse as The Race progressed.
2003:
Oxford won by just one foot - probably the closest Boat Race of all-time given that the 1877 Dead Heat was recorded as "by six feet to Oxford". In those days boat alignment at the start and finish photography were not as sophisticated as today. Two sets of brothers rowed in opposing boats setting a Race precedent. David Livingston and Matt Smith were in the winning Oxford crew. James Livingston and Ben Smith rowed for Cambridge. It was a titanic struggle of a Race.

2004:
Oxford and Cambridge clashed early in the Race. Cambridge went on to win.
2005:
Oxford won with the heaviest Boat Race crew of all time.
2006:
Oxford won by five lengths in a race which featured strong winds and waves especially around Hammersmith Corner . 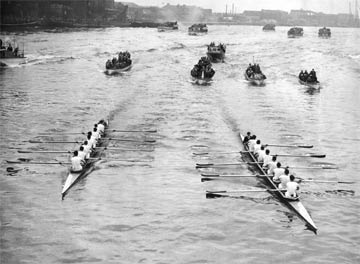 2007:
Cambridge wins by 1 1/4 lengths under a bright sky and with a slight tail breeze.

Australians racing in The Boat Race