The year 1905 was the genesis of the Bundaberg Rowing Club as we know it today, in the form of its administration and the achievements of its active rowing members. This was the year that Bill (Wob) Wells and Sam (Snow) Annable bought a pair-oared tub with roller seats and then, after the revival of an organised club and, in association with Bill Moller and Jack McCracken, placed Bundaberg on the Queensland rowing map once more.

The old shed, which by then showed the ravages of several floods, was repaired and use was made of the nearby Sailing Club shed because at that time sailing, inaugurated years earlier by Mr. W. B. Mellor, had been disbanded temporarily.

Secondhand four-oared boats were bought and the first row in the club boats took place in the following January. The new club's first public regatta was staged at Easter, 1906, an event which to this day remains the period for the club's annual regatta.

One hundred members had been enrolled at that inaugural meeting and the enthusiasm which flowed into the club spirit was so strong that within two years Bundaberg Rowing Club held the Queensland Championship, had been twice Champion of the Burnett River and the Mary River. It was recognised as the Premier Club of Queensland, an honour that has been won a number of times in the intervening years.

At this time the shed contained a fleet of 15 boats, inclusive of private boats.

In October, 1906, Billy Wells stroked the crew which on the Mary River won the first Queensland Four-oared Championship for the Bundaberg Club. As the same crew repeated the performance the following year, its members have a respected place in the annals of the club. In addition to Snow Annable, there were Bill Moller and Jack McCracken, while H. Ryan was cox. Wells again stroked the State title-winning crew in 1912 and 1913, although E. K. Campbell and J. Johnson had replaced J. McCracken and W. Moller respectively. H. Ryan was still cox. 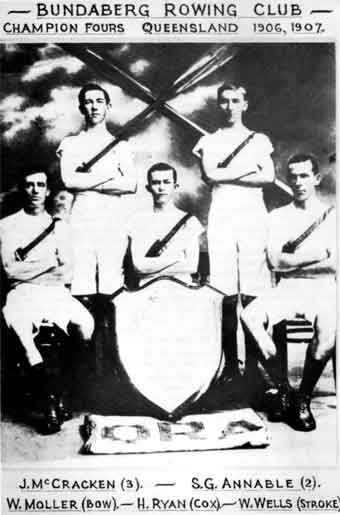 Support for the club continued strongly and within a year or two of the revival the committee began planning the construction of a bigger shed. A sum of 150 Pounds was earmarked for the proposal, but because the club was not the owner of the land on which the old shed stood the plan came up against a big barrier. There was one suggestion that a shed be built on piles over the mouth of Saltwater Creek, but the authorities vetoed this.

During 1908, when Mr. W. A. (Billy) Shield was Secretary, a move also was made to augment the fleet with an eight-oared boat, but the club had to wait for some years before this objective was fulfilled.

Renewed efforts to establish a substantial headquarters were made in 1912 after Wells' crew annexed the State title again but, although State honours were achieved again in 1913 and funds were raised, these were insufficient for such a purpose. In any event, the club had begun a slump and the money was needed to meet administration and operating costs.

The onset of the first Great War dispelled hopes of an early revival, although Bundaberg's name in the rowing world was kept to the fore by the performances as a sculler of Walter (Paddy) Christsen, who for six years up to 1919 held the State sculling title. Turning professional the following year, during an era of notable international professional sculling events, Paddy won a big Brisbane event and later defeated ex-world's champion Ernest Barry and Alf Fenton.

Fresh interest in organised rowing was aroused shortly after World War I, and in 1922 Bundaberg Rowing Club was allotted the State fours title, which was won by a Bundaberg crew stroked by Arthur Wilkinson and included Arthur Hassam, who in subsequent years was to row in State-winning eights and fours.

The revival led to an approach to the City Council, which granted the club a portion of land between Quay Street and the Burnett River as the site of a new club premises. This reserve for rowing shed purposes was gazetted in August, 1923. Having thus gained official possession, the club formed a working bee to level a portion of the site and pour foundations for the shed. But finance again proved a stumbling block — until a substantial donation came from Mr. George Buss.

Mr. J. E. Clemence, who had by this time displayed keen interest in the welfare of the club, was authorised to form a separate body, the Rowing Club Building Fund Committee whose objective was to provide a new shed. Members of the committee, of which Mr. Clemence was Secretary, were Messrs. G. W. Martens (Chairman), W. Moller, F. Smith, W. Schmidt, F. Christsen, W. Wells, W. Christsen, and the activities began officially in December, 1923.