Behind the scenes during this period, however, was developing the most momentous event in the long history of the Bundaberg Rowing Club. Nev Cullen for years had been pressing the Australian Rowing Council to consider Bundaberg as a venue for staging the King's Cup. Finally the decision in favour of Bundaberg was made for the 1969 event and the club began its preparations for an occasion that was to impart its seal on Bundaberg Rowing Club's high status in Queensland's rowing circles.

As if to celebrate the decision, the club's eight-oared crew in 1968 won the State title for the first time since 1948. Bevan Zunker was stroke, the crew including his brother Laurie and his cousins Alan (son of Herb Zunker), Gordon and Barry (sons of Arthur Zunker).

Then to cap all the efforts, Bevan also stroked the State title-winning eight in 1969 which was named to represent Queensland in the King's Cup race to be staged, with other national events, on the Burnett River at Bundaberg that year. Alan and Barry also were there again and other members of this historic crew were John Bigg, Geoff Lloyd-Jones, David Amos, Barry McLean, David Slaughter, the cox being Dean Wilkinson. 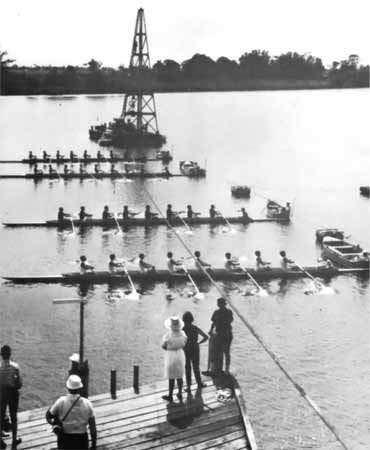 Johnny Bigg, a member of the crew in those two years, appeared in seven Bundaberg crews that won the State eights title, climaxing this meritorious performance by stroking the State title-winning crew in 1977. He also rowed bow in the two club crews that won the 1970 and 1971 State open fours and coxless fours championships.

Nev Cullen stepped down as Club President in order to devote himself full-time to the organisation, Berry Brown taking over as President.

It was a red-letter day in Bundaberg's sport history on the Saturday of April 26 when the finals were rowed. The Bundaberg crew failed to reach the final, having been relegated to third place in the repechage, and the exciting final was won by Victoria.

Successes continued into the 1970 decade, the club adding to its list of Queensland premierships. The eights won the State title four times in five years — 1971 (J. Pressler stroke), 1972 (M. Ford stroke), 1973 (M. Ford stroke), and 1975 (Alt Duval stroke). Alf, stroke of Australia's Olympic Silver Medal crew in 1968, had been engaged from Sydney as the club coach. Alan Zunker was in each of those crews, as was Johnny Bigg, and Barry Zunker in three of them. 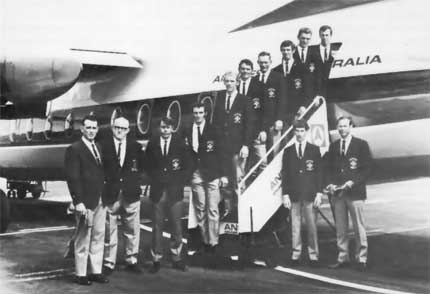 The Women's Rowing Club, whose President was then Mrs. Dorothy Dahl, also continued to be prominent. Although its crew did not win the State title in 1971, its second placing earned it a trip to Perth for the national event when the State winner withdrew. Stroke was Judy Axam.

The quality of the women rowers was emphasised when Bundaberg crews won the State title four times out of the next five years, the strokes being Sheryl Glass (1972), Annette Pownall (1973), Robyn Mackrill (1974) and Karen Speight (1976).