It was in the latter half of the '50s that Bundaberg Rowing Club once more made an impact on the competitive sector of rowing, chiefly through the efforts of the youthful Zunker family rowers of brothers and cousins. It was in 1957 that the initial representatives of these talented athletes first revived memories of earlier members of the family - the original Joseph, a club supporter of more than a half century earlier; Jim, who stroked an all-Zunker crew in 1920, then the State and King's Cup representatives, brothers Herb and Arthur; and finally Col, of the immediate post-war years.

For five years now more members of the Zunker families carried all before them in the Queensland Under 20 fours events. The same crew — Graham (stroke), Gordon, Laurie, Eddie and their cox, Barry — won the State title in four successive years, 1957 - 1960. Their 1957 success went into national rowing records as the first all-family State title winners, their average age at the time being 16 1/2. In 1958 this crew represented Queensland in the test races on the Nepean (Penrith) to select an Australian crew to contest the Commonwealth Games in Cardiff. They won the State open fours in 1960.

In 1961, this time stroked by Kevin Zunker, the State-winning Under 20 crew included Bevan and Barry again.

In 1964 still another all-Zunker crew - Laurie (stroke), Gordon, Bevan and Barry (bow) - competed in the Australian trials on Canberra's Lake Burley-Griffin for selection to the Tokyo Olympics, and won the State fours in 1965.

The following Zunker family picture was taken on the Burnett River in Bundaberg with all members of this crew having represented Queensland in the King's Cup. 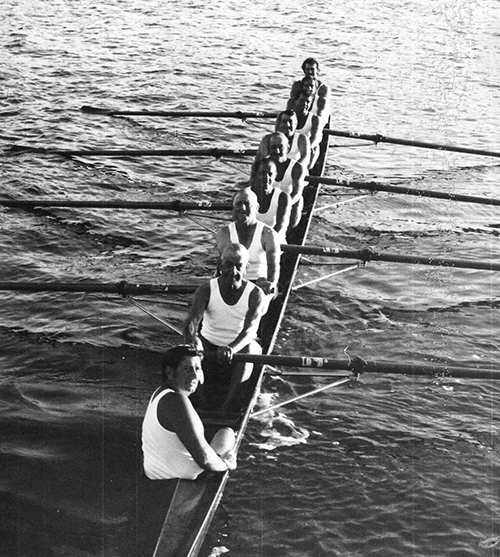 Other rowers, too, were keeping the club's pennants to the fore during this decade. John Pressler annexed the State single sculls title in 1965 and 1967 and a new band of women rowers made their mark on the Queensland scene. For three years in succession — 1965, 1966 and 1967 — the Bundaberg colours were raised for the women's State title, Betty Hughes (nee Lister) stroking the first two and Janine Cook, who had rowed in both those crews, stroking the third. Arlie Emerick also was a member of each title-winning crew.

The decade had opened in 1960 with the club spending $12,000 on remodeling the rowing pavilion after two years of intensive organising. The premises built in 1924 were given a brick frontage, the balcony being extended and anew glass-enclosed northern verandah being constructed. Kitchen facilities were also modernised.

The year 1965 was another significant one in the club's history, for at one ceremony five long-serving officials and supporters were conferred with life membership of the club. The honour was awarded to both Jack Clemence and his son Ron, the latter by then being Senior Vice-President of the Queensland Rowing Council, to Club President Nev Cullen, to Theo Wust, former Club Captain and prominent in the activities of the building committee, and to Ivan Lloyd-Jones.