Bundaberg's rowing stature in those inter-war years of the '20s and '30s was not confined to male rowers, for it was in this era that the club's women rowers gained equal renown. In fact, for practically the whole of the decade of the 1930s Bundaberg lady rowers dominated the State scene.

Two of the crews went within inches of winning the national title. The first was the initial State championship crew of 1930, comprising Edie Midgley (stroke), Flo Crossett, Audrey Hampson and May Brunke, with Percy Stibe as cox. Rowing the following year at Albert Park (Melbourne) in a borrowed, unsuitable boat — it was 40lb. heavier than any other in the race — they were beaten for the Australian title by a mere two feet. Johnny Lawrey was their coach. This crew won the State title in the three successive years from 1930 - 1932. 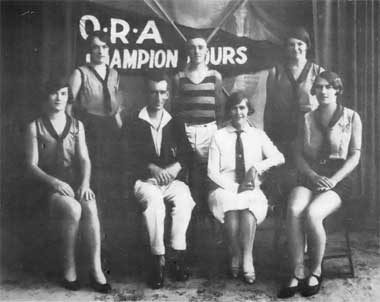 Audrey Hampson and Flo Crossett remained in the crew, Audrey Hampson taking over as stroke to win the State title again in 1934 and 1935. In the latter year, the crew contested the national title at Adelaide and was believed to have been first across the line, but the judge favoured another crew.

Then Veda Whetter came in as stroke, still with Flo Crossett and Audrey Hampson, and rowed to the State title success in four successive years from 1938 to 1941, inclusive. Gus Beiderman was bow in the first two years and Betty Bucholz the final two.

This had been the period when Mr. A. E. (Dooley) Lewis led the club as a most successful President.

A particularly happy merger of the two branches of rowing occurred when Rob Slean and Flo Crosset became married. They imparted their prowess to their family, for one son, Alan, was in Mal Ford's State champion four and coxless four crews of 1970 and another, Merv, rowed in Ford's Queensland champion eights crews of 1972 and 1973.

But before this took place Bundaberg Rowing Club in the years after World War II had become recognised as one of Queensland rowing's outstanding clubs. It became the State club premiership winner on a number of occasions, but its reputation was earned as much by its administrative standards as by the expertise of its prominent members on the water.

For a few years honours were divided among the varying types of crews. In 1946 and 1947 the Rickert brothers were the mainstay of the open fours, winning the State title in those years.Rob Slean's Queensland sculling title, his second, came in 1947 and Nev Cullen continued in 1948, the year Col Zunker burst on the scene as stroke of both the open fours and the eights title winners, taking his eight to Hobart for the King's Cup race. Ivan Lloyd-Jones was a member of that crew, and he also joined Zunker's State-title winning four the following year.

Lady rowers, too, returned to prominence, the club's 1949 crew stroked by Nancy Kidd failing by only a canvas to win the Australian title when representing Queensland at Brisbane. Another crew, stroked by Betty Lister, annexed the State title in 1950, while in 1951 Miss Lister, in again stroking the State winners, was joined by three members of the 1949 champion crew - Dorothy Dahl, the married daughter of the renowned Paddy Christsen, of World War 1 sculling fame, Hazel Parry and Aileen Jarvis. 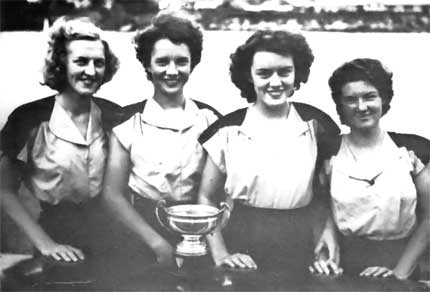 A frustrating period of almost a decade followed, in which the club's crews found the successes of State honours quite elusive. It was the era of new administration, however, Nev Cullen taking over the helm as a vigorous leader who prepared well for the considerable honours which were to flow to the club and to him personally in later years.