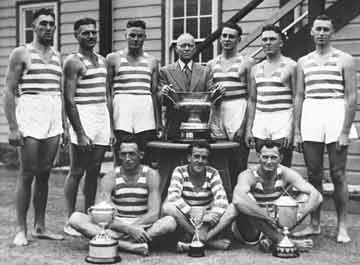 Funds were again a problem with the eight selected on the proviso that it could be funded from sources outside the normal revenue sources of the Australian Olympic Federation. The NSW Police Club intimated that it would have no difficulty in raising the funds to send the eight. Funding came from the NSW Police Federation and the police force itself with all policemen in NSW being levied two shillings per week from their pay.

Police superintendent George Ferguson, the father of Don Ferguson (2 seat) was instrumental in the fund raising and travelled with the team to Berlin as the unofficial team manager. 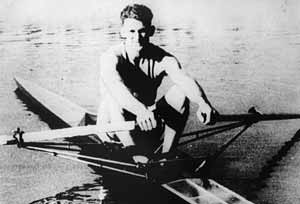 Cecil Pearce, a cousin of the great Bobby Pearce, gained selection after defeating Australian Champion Herbert Turner. The rowing selectors also nominated Pearce and Turner in a double scull. However the AOF selection committee (which included Kenny who supported the AARC recommendation) rejected this recommendation on the basis that the doubling up would jeopardise Pearce's chances in the single. Pearce's son Gary rowed in the 1964, 1968 and 1972 Games.

Harry Alderson, rower and general manager of the full Australian Team, suggested that a single club representing Australia was not ideal, as only the best in Australia could produce a crew with a chance in Olympic competition.

The Germans went to a great deal of effort to make the course at Grunau a success, The Germans dominated the regatta with five gold medals. One of the highlights of this regatta was the gold medal performance of Jack Beresford in the double scull. Beresford, in his fifth Olympic Games and at the age of 37, had a tough race against the German combination of Kaidal and Pirsch who had the better of the British crew in the heat. Beresford won a medal in each Games he attended including 3 gold medals. It is only speculation whether a sixth Olympic Games was possible without the intervention of World War 2.

Pearce trained very impressively in Berlin but suffered a severe cold on the day of his heat and finished fourth. In the repechage he came second and thus was eliminated.

The best result at the regatta came from the reserves in the double. The heat result was fair with a fourth placing. The big result was in the repechage with a fine win. The result in the final was a good result bearing in mind Dixon had not sculled before selection.

The eight's result was disappointing coming fourth in the heat and being eliminated in the repechage.

Photos of the 1936 Berlin Olympics