The State Associations each nominated a representative to act as a selector to choose the Australian team. The Australian Olympic Federation (as it then was) agreed to send an eight if the panel recommended a particular crew and if their expenses were guaranteed.

The panel selected the in-form Murray Bridge Rowing Club crew, from South Australia, on the condition that they met any challenges on the Port Adelaide course.

Bull was similarly nominated. Several crews challenged but the selected eight and sculler survived and went on to represent Australia at the Games.

The Murray Bridge Rowing Club crew won the test race on the Port River at Port Adelaide on 9th March 1924. The crew received financial assistance from throughout South Australia from public subscription in order to be able to represent Australia at the Games. Members of the Club recount stories of the crew members still having to work overseas as musicians to make ends meet.

The Murray Bridge crew won the South Australian eights race by 10 lengths in 1921 and started favourites for the Interstate race. However the Western Australia crew took the honours with SA fourth.

In 1922 the South Australian crew defeated all starters with a three length win. However they only narrowly won in 1923 by half a length, but nonetheless the Murray Bridge crew set their sights on Olympic representation and fund raising commenced.

Arthur Bull was also the in-form sculler in Australia during this period. He hailed from the Leichhardt Rowing Club in Sydney and won the Interstate event in 1922 and 1923 and also the test race in 1924. 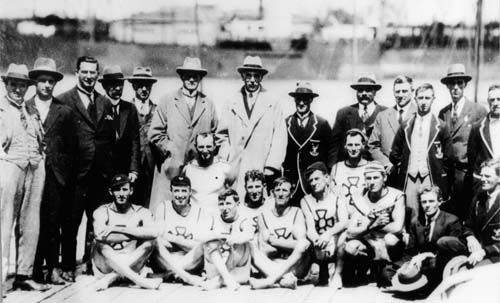 For more information about this Men's Eight crew, see "The Murray Cods," an entertaining speech given by Ted Thomas Jnr on 27 July 2000 upon the opening of Murray Cod Drive in Murray Bridge SA and the naming of the boat the "Murray Cods".

Selectors: One representative from each State Association 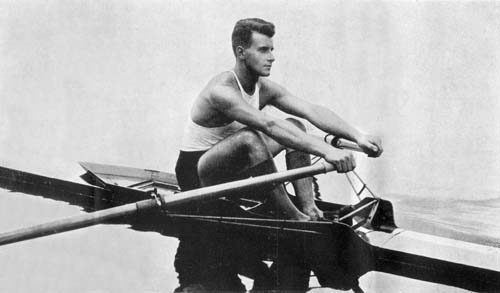 This was the first Games where repechages were held. The eight was beaten by Italy in the heat. In the repechage they came third behind silver medallist Canada in first place and Argentina in second. The winning American crew included the later famous author and Presidential candidate Dr Benjamin Spock.

Arthur Bull won through to the final but was off colour on the day and in the end did not finish the race. He was therefore unplaced. However this was reportedly after he was in the lead with 200 metres to go and after a bitter struggle with Jack Beresford. Beresford won the sculls after losing the heat to the silver medallist Garrett-Gilmore. The American sculler was over 5 seconds behind Beresford and the Swiss sculler well off the pace.

Photos of the 1924 Paris Olympics