Pearce was Australia's only rowing representative at these Games. He was now a resident of Canada and was assisted in his training by Major Godsell, who was in training for the professional world championships immediately after the Olympic Games. The final coaching duties were performed by his father. 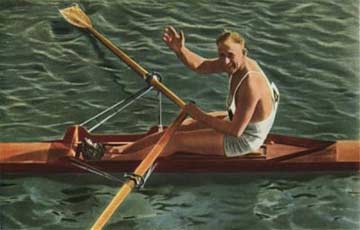 The Australian Amateur Rowing Council appointed Messrs P J Ryan (WA), Edward Kenny (VIC), O J Wood (NSW) as its selectors and Ted Kenny was also an Australian Olympic Federation selector. The AOF had conducted it's own selection review. The Australian Amateur Rowing Council selected only Pearce as there were insufficient funds available to select a crew. Bobby Pearce advised that he would compete without expenses as he was living in Canada. He drove 3000 miles from Hamilton Ontario to Los Angeles with his scull on the roof of the car.

There were two other Australian rowers racing at these Games, but under the British flag.

Lewis Luxton (VIC) stroked the British eight. He was studying at Cambridge at the time. Luxton later succeeded his father Sir Harold Luxton as an IOC member in Australia and served on the AOF Executive Committee for many years. It was Luxton's casting vote on the AOF that enabled Australia to compete at the Moscow Games.

Lewis Luxton's father Sir Harold Luxton, is credited with building up the AOF reserves enormously with his fundraising, thus leaving the AOF in a strong financially stable position. Jointly with Hugh Weir he is credited with winning the Melbourne bid for the 1956 Olympic Games when Melbourne defeated Buenos Aires by one vote. Sir Harold Luxton stepped down from the Organising Committee and Lewis Luxton, as Deputy Chairman, undertook a great deal of the work for the successful 1956 Games. He was awarded a CBE for his services to the Olympic movement.

The other rower was W A T (Bill) Sambell (VIC) who rowed four in the British crew. Both Luxton and Sambell had rowed together at Melbourne Grammar before going straight to Pembroke College at Cambridge as under graduates. Lewis Luxton was the first Australian to stroke a Cambridge crew. The Cambridge crew raced as Leander at Henley Royal Regatta winning the Grand Challenge Cup. The crew was then selected to represent Britain at these Games. At these Games, and also at the 1908 and 1912 Games, Australians were regarded as part of the British Empire and so qualified for British crews.

The rowing course had been constructed at Long Beach between the Pacific Ocean and the heart of the Californian capital of Sacramento. It even had a rail line alongside the course for the purpose of transporting spectators to various parts of the course. The racing was conducted over 4 lanes.

It is interesting to note the strong New Zealand presence of a pair, four and eight.  Their pair finished with a silver medal.

Pearce met Millar from the USA, the silver medallist, in the heat and forced Millar into the repechage. Millar qualified through the repechage in what was described as a training row. Pearce led the final from the start. He rated 28 off the start and settled to 24. Millar had to rate near 40 to keep up. Pearce maintained a half length lead throughout the race.

The eights final finished with all crews within a length and clashing oars. The margin between first and second was a foot. It was a fitting result for the local Californian crew which won.

Another race of interest included the man of four Olympics, Jack Beresford. His coxless four won gold even though Arthur Edwards was substituted in place of a sick crew mate. Edwards had won gold in the coxless pair the previous day.

The winning American double included Myers and Gilmore who were aged 36 and 37 respectively. The lead in the race changed from the Germans to the Americans in the last 200 metres.

The Italians stopped rowing one stroke too early and lost the gold medal as a result.