These Olympic Games were highlighted by altitude issues. The rowing was conducted on a man-made canal at Cuemanco near Xochimilco outside Mexico City in excellent conditions but at 7300 feet altitude. There were about 40 cases of altitude sickness where competitors collapsed during or after racing, including the Australian coxless pair. 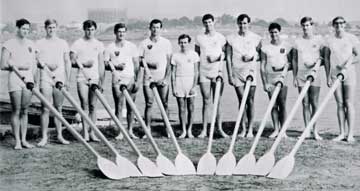 The total Australian Olympic team was restricted to 180 people so rowing was well represented in view of the 1964 results. One coach and a rowing team manager were also permitted.

The Interstate Championships were due to be held at Ballarat but due to a severe drought, water levels were too low. NSW agreed to conduct the event at Penrith. The NSW crew won the King's Cup race but only by one second to Victoria. Kert of Queensland won the sculls from Edwards of Victoria, Winter of Tasmania and Reddell of NSW. Subject to grading and final selections, the NSW crew was to be the Australian crew and Kert to be the sculler.

Phil Cayzer (NSW) is credited with the recruiting of several of the NSW rowers to Sydney Rowing Club to create the crew and also with much of the subsequent coaching of the eight both in Australia and Mexico.

The selections for the other five Olympic events were conducted at the National Championships at Murray Bridge in South Australia. The outstanding performers at the regatta were Guest and Ramage in the coxless pair. They were graded second behind the eight.

The selectors also believed that the coxed four of Graeme Boykett, John Harry, David Douglas, Stephen Gillon, cox Tom Daffy and coach Hubert Frederico were also of medal standing. This crew had won the North American Championships in 1967. However the restriction on numbers meant that they missed out.

Kert and the coxless four, which included Guest and Ramage, also missed out. The selections for the eight saw David Douglas and Bob Shirlaw being selected in place of John Nickson and John Clarke who became reserves. 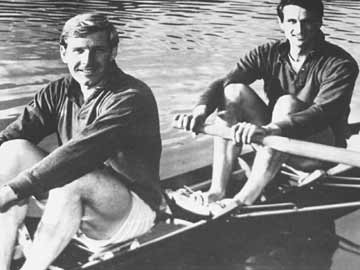 The Australians planned to settle down for the first 800 metres to conserve energy for the final sprint. The New Zealanders led for the first 1200 metres. The Germans, coached by the great Karl Adam, drew level and then passed them. The Soviets, after a slow start, reached third placing by the 1500 metre mark. The Australians, after having kept a low profile, made their move and moved up to the leading crews 100 metres from the line. In the final sprint the Germans held on by less than a second in front of the Australians. Boats continued to be an issue with the German boat being 34 kilograms lighter than any other boat.

The Australians were content to come second in their heat to the silver medallist USA and to the gold medallists Germany in the repechage. In the semi-final, however they were almost a length in front at the 1800 metre mark when Ramage partially collapsed and three crews passed them. Some minor satisfaction was achieved with a win in the petite final.

New Zealand won their first ever Olympic rowing medal in the coxed four ahead of the East Germans in second place and the Swiss crew in third place. This Swiss crew included the current FISA President and IOC member Denis Oswald.

Photos of the 1968 Mexico City Olympics