This page is under construction.

Before talking about John, it is worth noting that his father Tom was one of the giants of the sport, not only as an oarsman, but as a friend and supporter of sport in Australia throughout his life. There is no doubt that the joys of the sport were passed onto John.

John commenced his rowing at Sydney Grammar School. He rowed for four years at school from tub fours to coxed fours and finally in the school eight in 1961.

His rowing after school was interrupted by a part time Economics degree at Sydney University where he graduated in 1966.

His father passed away in 1962 and it was important to the family that he held a full time job at the Commercial Banking Company. So from end of exams until University returned in March, he would always resume rowing.

The lead up to the 1968 Olympic Games is interesting. The four of Joe Fazio, Kim Mackney, Michael Morgan and Alf Duval, coxed by Alan Grover and coached by Phillip Cayzer were selected in in late 1967 for the Australian Test Race Series against New Zealand. Around the fire one night at the Test Race trials at Wendouree, the remaining Sydney Rowing Club members of Graeme Farrell, John Nickson, John Ranch and Gary Pearce committed to rowing another four in the following season. They won the domestic races in their absence of their colleagues in the Australian four. When the two fours combined after the Test Race Series, the boat "just clicked". They were able to do regular constant speed 500m times over the course, and at then record pace, and in training, and regularly. It was a superb crew. They won the NSW Championship, and with the addition of John Clarke and Peter Dickson, won the King's Cup. The second four in far inferior boat, very nearly defeated the top four at the NSW Championships.

John was naturally selected into the Olympic squad in 1968 Mexico. In that year, the squad comprised an eight and pair plus two reserves. Whilst John ended up as reserve, he fondly recalls a trial race just prior to the racing at Mexico City. The crew, with John replacing Bob Shirlaw who was ill, did a great trial race. It was the talk of the rowing village that night. He also recalls the effects of the altitude of a full race piece. 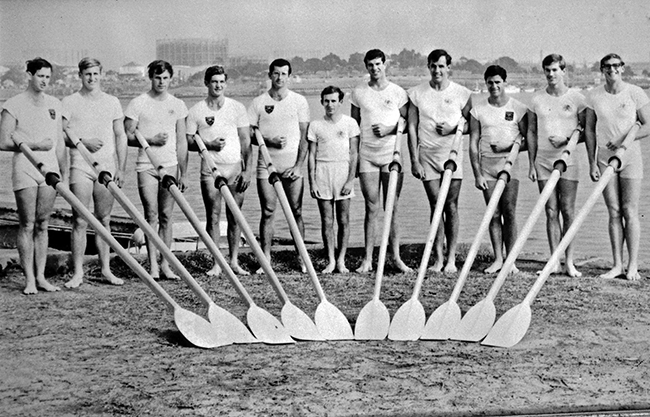 1968 Olympic Eight squad with John on the left hand side 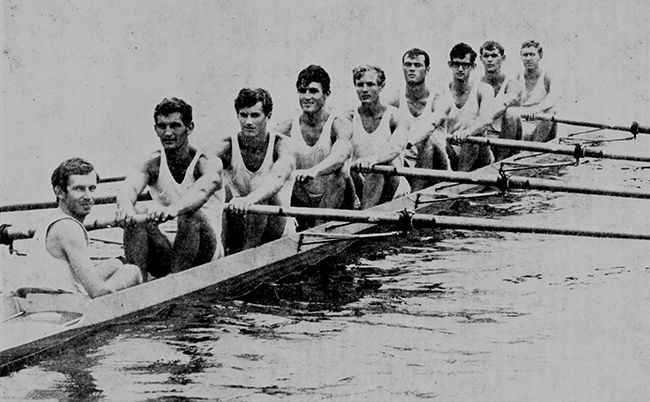 John was also active in administration being Club Captain in the 1971/72 season. However work got in the way in 1969 when he changed jobs and joined J B Were where he stayed for 35 years, a majority of those years as a Director/Partner.

He was asked to relocate to London in June 1972. Whilst in London, he joined London Rowing Club and rowed at Henley and many regattas in UK over 3 and a half years. He found it "a great experience for him and a great way to assimilate. I also played Rugby for a sub district team during my stay."  Whilst in London, he had work responsibilities in UK and Europe.

On his return to Australia in 1972, he coached at Sydney Rowing Club including co-coaching with his great friend John Coates.

John then moved to Melbourne with work and joined Mercantile Rowing Club and coached from 77 to 82, including co-coaching with another life long friend Phil Cayzer in 1977 and 1978. As an aside, John rates Phil as his most influential coach admiring not only his coaching but also his organisational ability.

Work commitments, a lot of interstate travel and married life caught up with him and restricted his time. He was a very effective treasurer at Mercantile for just under 4.5 years and also on the committee in the earlier years.

It was also pleasing to see both his children Tom and Amanda enjoy the sport both at school and at Mercantile. The family tradition continued.