Throughout his 50+years of dedicated involvement in the sport, he excelled as a rower, coach, administrator and leader.

He commenced his rower career at Xavier College where he coxed the first crew in 1947, missed out on coxing the winning 1948 crew through appendicitis and raced as a rower in the second eight in 1949.

He joined Mercantile Rowing Club and succeeded in racing in many successful senior eight crews and his rowing career culminated in being a member of two winning King’s Cup crews in 1957 and 1958. It was during this time he met and married Beth Williams, the daughter of then Victorian Rowing Association President, Mick Williams. 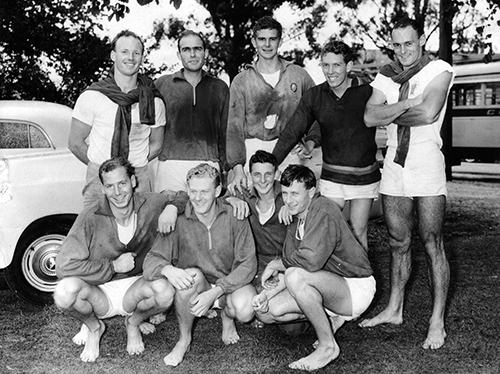 As a coach he coached a winning King’s Cup crew, many school crews as well as many winning National Championship crews. He coached or substantially assisted in coaching first crews at Xavier College, St Kevins College, Brighton Grammar School and Melbourne Grammar. He was generous in his coaching. For example he coached a development club crew the season after he had coached an Australian crew to a bronze medal.

Perhaps one of his best known crews was the 1966-68 men’s four of Graeme Boykett, Stephen Gillon, David Douglas, John Harry and cox Tom Daffy. They won the North American Championships in 1967, the proxy World Championships for that year, and missed out on selection for the Olympic team due to the restriction on team size following the poor rowing performances in 1960 and 1964. 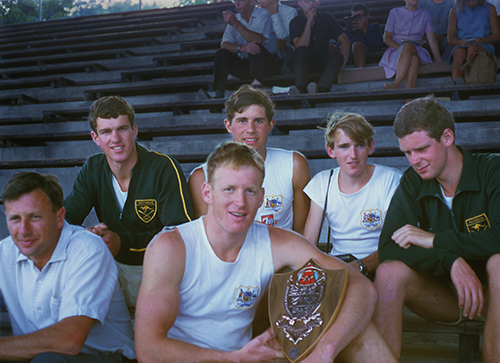 One of the stories that will live in folklore was is the day that he lost his car into the Yarra. It was the practice in those days to park cars on the Yarra bank during regattas. Obviously the brake was not applied correctly and the car slowly slipped down the slope into the river. When he passed on his coaching bike, he was too engrossed in his coaching to give it a thought.

His most successful crew was a lightweight eight which won a bronze medal at the World Championships in 1977. 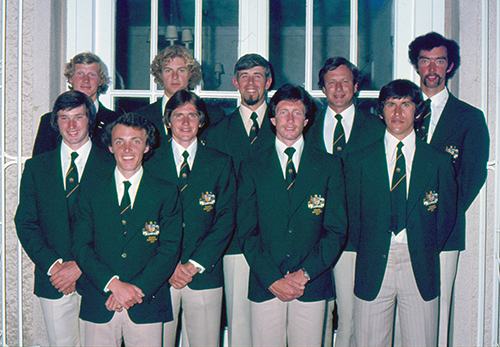 In 1979 he followed the footsteps of his father in law and became President of Rowing Victoria. In that role he provided excellent leadership and sage advice to the committee. In his first year as President of Rowing Victoria, he oversaw the amalgamation of the Victorian Rowing Association and the Victorian Ladies’ Rowing Association. The Rowing Victoria Annual Report noted this event as “probably the most important happening in the 105 year history of the Association.” His input into the many months of discussions was profound.

He also oversaw the creation of two new courses during his term, namely the new Carrum and Nagambie courses and the holding of National Championships at both these venues.  Further during his time as President, he oversaw the introduction of professional management of the Association.

He also personally pursued some projects which he deemed important to Victorian rowing. For example, he had Jeffries Parade renamed Boathouse Drive to cement the position of the Boat Clubs.

He was a lifelong supporter of rowing and we are the richer for his efforts.

Judge of the Family Court of Australia