Australia placed a great deal of effort and resources in qualifying crews in 2015. Unfortunately their results were poor and it did not qualify any lightweights or women's sweep crews.

The crews sent in 2016 to qualify for the Games at the final qualification regatta were:

The only boat to qualify in 2016 was the men's single scull of Rhys Grant.

This was a great disappointment for Australia not having lightweights, women's sweep or eights competing at these Games. Specifically it the first time since the 1948 Olympic Games, Australia did not qualify an eight for these Games.

Despite this disappointment, the quality of the crews qualified was good.

Then the Russian drug scandal arose. The international athletics federation banned the Russian athletics team. WADA uncovered State sponsored drug testing violations and the IOC acted to protect clean athletes and set strict entry guidelines for Russian athletes. The FISA Executive Committee, due to the manipulation of the Moscow Laboratory tests, has determined to their comfortable satisfaction that only six entered Russian rowers have met the criteria of having been tested reliably and adequately in international tests.

The effect of this decision was that Russia had six remaining eligible rowers - one lightweight and five open weight men - for competition in Rio 2016.
Therefore, four Russian boats (LM4-, LW2x, M8+ and W8+) will be withdrawn from participation in the Games and will be attributed to the next placing crews at the 2016 Final Olympic Qualification Regatta in Lucerne, Switzerland, as follows:

And in the 2016 European Continental Qualification Regatta in Lucerne, Switzerland, LW2x to the Italian Rowing Federation.

This was a remarkable situation.

Within the Australian team, sadly Jaimie Fernandez (RA) had to withdraw from the team leadership role due to personal issues but was ably replaced by Ray Ebert (QLD), team leader of 2012 Olympic Rowing team.

The highlight of the regatta for the Australians was the win by Kim Brennan in the scull. Her race was a masterful that left nothing to chance. A strong start, held off other scullers through the middle 100 metres through the open water, then sprinted home with the other scullers.

It was not all Kim's way with the conditions on the first day almost unrowable. Kim was forced into the repechage. She dominated her racing thereafter.

It is the first time an Australian woman has won an Olympic rowing gold medal since 1996, when Kate Allen (nee Slatter) and Megan Marcks (nee Still) won gold at the Atlanta Olympic Games. 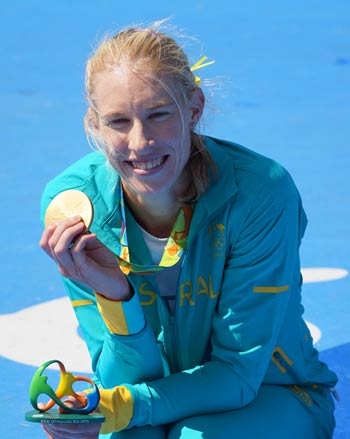 Rhys raced superbly and above all expectations. He was entirely competitive in this toughest of all events. He finished second in his quarter final but alas 5th in the semi final putting himself in the B Final. He finished ninth is great display of sculling. 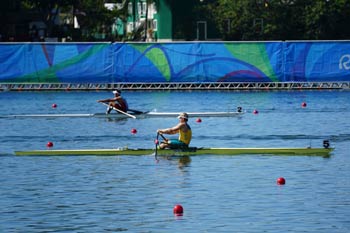 Rhys finishing his B final

Another superb performance finishing first in the B final. The crew was unfortunately out raced in the semi-finals but made up for it in the B final. It appeared that they improved with every race. 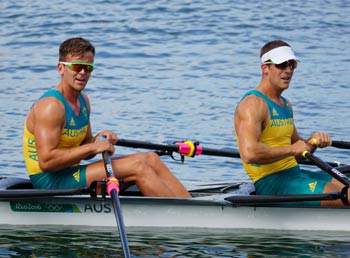 The double after their final

The Australian women's double race well but missed out in their semi-final. As reported at the time: The women’s double sculls of Sally Kehoe and Genevieve Horton were drawn in a tough semi-final, taking on reigning Olympic champions Great Britain as well as Poland, who had won World Cups 1 and 3 this season. Kehoe, a three-time Olympian, and Olympic debutant Horton were quick out the start and sat comfortably in third throughout the first half of the race, led by the Poles and the British. As the crew approached the 1500 metre mark, the French began to make their move to pass the Australians. With other crews out in front, the battle came down to the Australians and the French as to who would qualify for the A-Final, with the French pipping the Australians to the post to take the place in the A-Final. 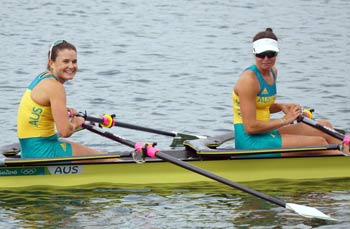 A bitter sweet moment after racing

The Australian Men's Quad Scull entered the final as well earned favourites. The German's appearded to approach the final with the attitude of gold or nothing. They raced superbly with a very quick start leaving the other crews in their wake. The Australians had to fight from behind the whole way and in the end were unable to catch them finishing second.

The women’s quadruple sculls, of Jessica Hall, Kerry Hore, Jennifer Cleary and Madeleine Edmunds, made a shock exit from the 2016 Rio Olympic Games in the repechage when the crew finished fifth in a tightly fought repechage and therefore missed out on a spot in the A-Final. The result was somewhat unexpected since the crew had had a good lead-up to the Games, finishing with a silver medal at the final 2016 World Rowing Cup 3 in Poland, the last international racing event before the Games began.

The crew powered out the start up against crews from Netherlands, Poland, Australia, USA and China. With Poland and the Netherlands taking the lead it was a battle between the rest for the remaining two spots in Wednesday A-Final.

As the crew approached the final 500 metres, they upped their rate but so did the USA and China and with 100 metres to go the three crews were bow ball to bow ball, and so close at the finish it resulted in a photo-finish to decide who would join Poland and the Netherlands in the A-Final. Once the photos were back, it was declared that Australia had finished fifth, a mere 0.06 seconds behind China, and 0.11 seconds behind USA, who had nabbed the final two qualification spots.

A visibly distraught crew spoke to the media post-race. “Yes we are pretty devastated, we threw everything at it, with the field so good in this event in particular, and at the Olympic Games, and all it took was a few strokes, that weren’t as good as we can produce, for the result to happen,” said Hall. 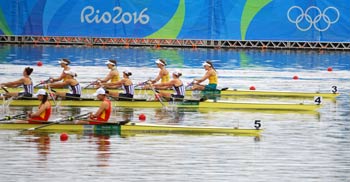 With a couple of strokes to go in the repechage

The men's pair was one of those crews which outperformed expectation by winning their heat and finishing second in the semi-final. They were on track for a podium finish. Alas unfortunately this was not to be with a sixth placing the result. It was an excellent result all the same.

In the final, the Australians were quick out alongside the Italians and South Africans, with the hot favourites New Zealand unusually slow out of the blocks. At the halfway mark the Kiwis found their speed and rhythm to take the ascendancy, ahead of the other semi-final winner Italy, with Australia back in fifth position but holding on to the leading pack. Heading into the final 500m of the race the Kiwis extended their lead to two and a half boat lengths, with a hard fought battle for the minor medals taking place between Italy, Great Britain and South Africa. Australia maintained fifth position. The Kiwis took out the gold medal, ahead of a gallant South Africa in second, Italy finished third, Great Britain fourth, France fifth and Australia sixth. 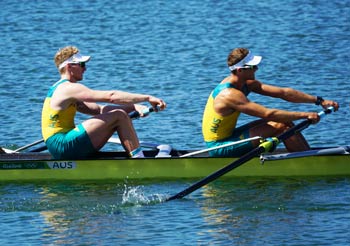 Rowing back after the final

Whilst this crew had obvious aspirations to win gold after winning their heat and semi-final, the British crew were favourites for very good reasons. The bank side critics proferred the view that the crew did an outstanding job finishing second in a tough field.

Right from the start the Australians and the British were the two crews to watch. The Australians were challenging the British at the halfway mark, with only 0.22 of a second separating the two crews. As they approached the 1500 metre mark the British began to edge away from Australia, by half a boat length, and despite a big push from the Australians the defending champions held on to win by two-thirds of a boat length. Great Britain once again claimed the title that they have not relinquished since the Sydney 2000 Olympic Games. Australia took home the silver in a time of 6mins, 0.44 seconds, while the British finished 1.83 seconds ahead of them to take the gold. 2015 World Champions Italy finished in third.

Speaking of the British dominance, Lockwood was gracious in defeat. “Credit to them, they held strong and had what it took to hold us off,” Lockwood said. “We were beaten by a better crew today and congratulations to GB for the win. I think both crews were throwing down at the halfway mark and it takes a toll on us, and on them to cover our push, that’s why we started with 400 metres to go, but they held us off and then jumped ahead in the last 250 metres,” admitted Lockwood.

Post-race the crew huddled together, where Dunkley-Smith said they reminded each other about their achievement, rather than their disappointment of not winning gold.

The lack of preparation with the late entry of our women's eight showed. Given their lack of competitiveness at the front end of the field, the crew raced superbly to make the best opportunities of issues with other crews. Alas, no racing issues were experienced by the other crews and they raced to form. 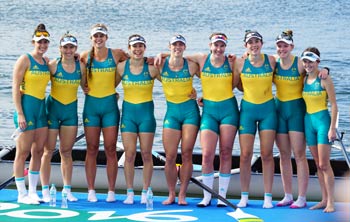 The Women's Eight after the repechage

Rowing Australia reported this race as follows. Erik Horrie is “over the moon” to have secured a second straight silver medal, in the AS men’s single sculls at the Rio Paralympics rowing regatta. The 36-year-old was one of the pre-race favourites, having won the past three world championships. But he couldn’t keep pace with Ukraine’s Roman Polianskyi, who steadily increased his lead throughout the 1000m race to finish three seconds ahead of the Australian, in a new Paralympic best time.

“Every athlete comes to a Paralympic Games chasing a gold medal,” Horrie reflected. “But to come away with any medal, it’s unbelievable, especially with the talent of all the athletes I went up against today. It’s just a privilege to be able to be on that podium.” 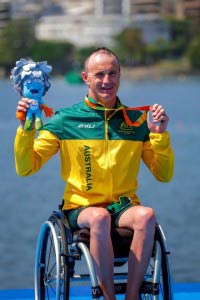 “I didn’t quite know what to expect but it’s been amazing,” said Lefroy. “It’s great to have family here, it was really uplifting coming down the end, I could actually hear the roar. It was really exciting and very powerful.”

And Ingram warned that they’re just getting started, “this crew’s literally been together 6 months, so imagine what we could do in four years.”

It was a bittersweet end to what’s been an incredibly challenging regatta for the duo, who admitted they didn’t know what went wrong. “As for heart and spirit, we had that on 110%,” Ross said. “It’s an absolute privilege to be here with Gav and finish this journey with him as best as we could, it’s a really proud moment. We’ve dedicated our lives to rowing the last four years, we’ve sacrificed everything that we possibly could, family, friends, everything.”

“We weren’t good enough at this regatta and where it counted which is heartbreaking,” Bellis said. “In the last four and a half years I’ve been away from my wife and kids for two years to give it everything I had, so this is as much for all our family and friends and supporters as it is for us. We couldn’t have done any more.”

Despite their obvious hurt, they were still incredibly gracious, heaping praise on the host nation.