Selection of the eight was undertaken 12 months in advance of the Olympic Games which meant that the crew raced the 1952 King's Cup for NSW during its preparation. The crew was comprehensively beaten by Victoria by four lengths with the media claiming it should be nominated in place of the NSW crew. The NSW were far from their best having suffered severely from adverse reactions from the vaccinations for overseas travel. The stroke Phil Cayzer lost 20 lb in three days and he was only one of five affected. It was also mentioned that their fundraising responsibilities, some 7,000 pounds, impacted their preparation. 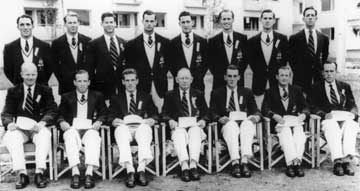 Selector Gould had faith in the crew and stood by his decision. To the credit of the crew and Gould, the eight won a bronze medal. The selection of an eight oared crew was significant in such a small sized Australian Olympic team of 96 people. The AOF later advised that if it had not been for their defeat of the highly acclaimed American crew at the Christchurch Games in New Zealand in 1951, an eight would not have been sent. The AOF still could only fund four seats for the eight.

The selection of Merv Wood in the single was automatic following his gold medal in London in 1948 and his wins in the President's Cups in 1949, 1950, 1951 and 1952. Selections for the other crews depended both on standard and finances.

Test races in Ballarat were conducted for the remaining crews. The double scull won their right to compete at these test races. The coxless pair were the emergencies for the eight and raced. A coxed pair from Melbourne Rowing Club of Noel S Wills (Vic), Murray A Christie (Vic) and cox J Bailey (Vic) was also nominated but not approved due to lack of finances.

It is interesting to note that no coaches were selected. Reports from those involved noted that the crews suffered from this lack of coaching support and a good training program. Phil Cayzer, stroke of the eight, received an Order of Australia Medal in 1992 for his lifetime service to rowing. 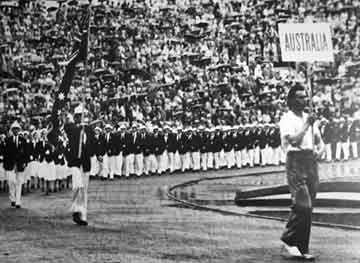 Manager: Jack R Berkery (TAS)
Selector: A B (Joe) Gould (NSW) was the sole selector for the eight.

Mervyn Wood had the honour of being Australia's flag bearer at the Opening Ceremony.

Bill Thomas coached the eight whilst in Australia.Ted Bromley and a committee raised the funds for Bill to travel with the team but this was not sanctioned by the AOF. Selector Gould accompanied the crew to Helsinki and is credited with some most beneficial coaching. Despite the efforts of the crew on their return, the AOF would not officially recognize Gould as a team member.

The eight had a serious setback during the final preparation when Mervyn Finlay suffered torn rib muscles. In the heat he rowed in considerable pain and the crew raced stroke for stroke with the Yugoslav crew but was beaten narrowly. The crew faced the eventual gold and silver medallists in the semi final forcing them through the second repechage against Yugoslavia again. This time the result was reversed with Australia making the final in the place of Yugoslavia. The eight raced magnificently in the final to get the bronze medal. The winning American crew maintained a tradition established over the previous eight Olympic Games of an American victory in the eights event.

Wood suffered a severe injury to his elbow as a child. At various times during his rowing career, the injury caused his much distress. Unfortunately the 1948 Games was one of these times and it is suspected that he was unable to race at his best. He raced a good heat but had to qualify through the second repechage to the final. In the final, he finished an excellent second to the 22 year old Russian Yuri Tukalov. Wood was lauded by all being now a 35 year old. Little did they know there was another Olympic Games and Olympic medal still to be won by Wood.

The Australians also suffered injuries with the double. Riley had an infected fingernail which was removed just prior to racing. Their heat included the gold medallist and another finalist. The first repechage was a good race but the second repechage against the bronze medallists Uruguayans proved too tough for them.

Photos of the 1952 Helsinki Olympics