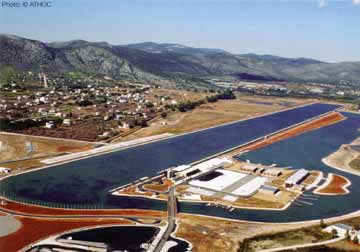 The rowing was conducted at Schinias, a coastal town approximately 45 minutes north east of Athens and the Olympic Village. The team departed Australia on various dates and competed at both the Lucerne and Amsterdam Regattas. The men's crews trained at Varese in Italy and the women trained at altitude at St Moritz Switzerland.

The team travelled to Athens on 8th August with the rowing being conducted from 14th to 22nd August. The course was expected to be very windy and rough with the experience of the 2003 World Junior Championships where boats sank and the rowing had to be conducted over 1000 metres. Despite one day where rowing was postponed, the conditions were perfect for rowing.

The four medals, including one gold medal, were superb and a great credit to the team. Further, the results made Australia the best performed men's team at the Olympic Regatta. However the results for the team did not quite match their expectations. In particular, realistic medal prospects were held for other crews including the men's quad scull, women's lightweight double scull and women's eight. Accordingly the team left the regatta

Qualified crews at the 2003 World Championships

Australia qualified all boats except the Women's Single Scull and Women's Pair at the 2003 World Championships. Australia and Germany were the top nations at these Championships, each qualifying 12 boats. Australia was unsuccessful in qualifying these other two boats at the Lucerne qualifying regatta in 2004.

As a result of the fine performances in 2003, the rowing section of the Australian Olympic team was the largest of the Olympic team.

Therefore Australia qualified 12 of the 14 events which was a great result.

The selections for this team were very difficult due to the large number of good athletes available. The margins between selection and non-selection were very fine in most cases. Due to the lack of a gold medal in Sydney, the selection policy was changed to make sure that the objective was gold medals, not just medals.

As the men's priority sculling boat was the quad, Duncan Free was selected into the quad leaving open the single scull to Craig Jones. Craig was a superb choice being one of our most experienced scullers and performed well. His eleventh place was excellent considering the depth and quality of the field.

An example of this quality is that the small final was won by Marcel Hacker the highly credentialed German who nearly won the World Championship in 2003. Olaf Tufte, the 2003 World Champion, won again in 2004 despite a great race with Jueri Jaanson from Estonia. Vaclav Chalupa from the Czech Republic led the race early but could not maintain his speed in the second half of the race.

The Australian crew was unfortunately never in the hunt for a medal. They qualified for the semi finals through a third place in the heats but could not get into the mix for the finals.

A dead heat for third place in one of the semi finals between USA and NOR caused a seven crew final. The 2003 World Champions from France, who were not the largest rowers in the event by far, won the gold. Many expected the defending 2000 championship Slovenian crew of Iztok Cop and Luka Spik to win but this was not to be in 2004. Cop had only spent a limited amount of time in the double preferring to race in the single.

However the semi final was not to be their race. They started well enough but could not maintain the same boat speed as their competitors in the second five hundred. Whilst they only fell back slightly, it was enough in this tight competition to make it almost impossible to regain contact with the leaders. In the end they were in fourth place at every 500 metre mark.

Even the B final was a huge race. In that race they had to defeat the Sydney gold medallists Italy and the fancied Swiss and Estonian crews. It was only by the 1350 metre mark that the Australians broke free of Italy and then had to hold off the fast finishing Swiss and Estonian crews. They fortunately had sufficient reserves to hold off the fierce challenges made to win the B final ending the regatta in seventh place.

James Tomkins, aged 39 at this event, became Australia's most successful Olympic rower with this race with a total of three Olympic Gold and one Olympic Bronze medal from five Olympic Games. We all hope that he will return in 2008.

The crew raced superbly and with great authority in every race - they led at every 500 meter mark. The final was raced perfectly to plan. The first 500 gave them the lead they wanted to keep the field at bay. The second 500 was a maintenance strategy before a push through the 1000 metre mark gave them clear water which they then defended well. There was no way they would be rowed down in the last 500 metres.

Drew Ginn became a dual gold medal Olympian even after having to miss Sydney with a back injury. The victory was therefore especially sweet for Drew Ginn. He had gone through back surgery and a painful recovery after Sydney to make it these Olympic Games. There was a tear shed after the raced was completed.

The second semi-final had its drama with a tight finish of four crews to the line. It appears that the Canadian crew left their lane and clashed oars with the second placed South African crew who then finished fourth. A protest was lodged and the Canadians were excluded and ranked last in the semi-final. They protested that they should also be allowed to the final. This was not allowed and they refused to race the B final.

Whilst this crew was the third-ranked men's sweep boat, high hopes of a medal were still held. Sadly for the crew, they missed out on a medal finishing fourth in a great race won in a photo finish by Great Britain from Canada.

The Australians started well maintaining a third placing through the first 1000 metres. However they were unable to match a move in the third 500 metres by the leading crews leaving them in fourth place, but more importantly 1.37 seconds off the third placed crew with 500 metres to go. Unfortunately it was an task to recover and so they finished a strong fourth.

The men's eight was a great crew under a great coach—Tim McLaren. They raced their heat to perfection with a strong first placing.

However in the final, the Americans played the 'catch me if you can' race plan blasting off the start and getting a 3.26 second lead by the 1000 metre mark with the Australians in second place. This lead in such a tight race was near impossible to overcome in the absence of a disaster. The Americans were also a very strong crew and able to undertake this strategy.

The Dutch crew made a substantial move in the third 500 hundred passing the Australians in pursuit of the Americans. The Americans held on after a great effort by the Dutch with Australia third.

In the seven seat of the Australian crew was Michael McKay who notched up yet another Olympic medal taking his tally to two Gold, one Silver and a Bronze from five Olymopic Games. The sacrifice of every rower is great, but Michael also had to move his wife and family with him to Sydney to train for these Games. We can only hope he is able to continue his superb rowing career. Michael is one of Australia's greatest ever rowers.

The USA crew broke a 40 year drought of victories in this event which they used to dominate.

The German sculler started slowly but broke through the field in the second 500 metres and never looked like being challenged throughout the rest of the race. It was a commanding performance.

The Australians were not competitive and were well behind in both their heat and repechage. The New Zealand crew, comprising twins Georgina and Caroline Evers-Swindell, raised the spirits of their nation being the only medallists in any sport to the half way mark of the Games.

The Australian crew was one of our best medal chances. The crew had broken the German domination of this event in 2003 by taking the World Championship. However the Germans were not going to let this lapse get in the way of gold in 2004 dominating both heat and final.

Kathrin Boron of Germany joined the elite by winning her fourth Olympic gold in this quad. The British crew, coached by Australian Paul Thompson, came back hard in the second half of the race but could not reach the Germans.

A number of days after the event, the Ukranian crew was disqualified for a doping infringement and the bronze was awarded to the Australian crew. A member of the Ukranian crew had tested positive for a banned stimulant.

Australia was not represented in this event.

In the third 500 metres, however, it was reported that Sally Robbins started to lose consciousness and the crew dropped back but was still competitive by the 1500 metre mark. However her condition deteriorated and she stopped rowing. The crew was unable to contest the last 500 metres and crept across the line well back some 10 seconds after the fifth placed crew.

It was reminiscent of the race of Guest and Ramage in Mexico in 1968 when Ramage lost consciousness in the semi-final due to altitude sickness. It was a sad end to a season of high hopes for the crew.

The final was started well with a good first 1000 metres however the Australians could not match the speed of the other crews in the last 1000 metres. For example, the determined Romanians took 3.5 seconds off the Australians in the third 500 metres to take the lead. The Germans and the Dutch crews did the same in the final 500 to take Silver and Bronze leaving Australian fourth.

Romanian Constanta Burcica made history by gaining a hat trick of gold medals in this event.

The combination of Wurf and Jelbart were some of the youngest members of the team and obtained great experience at these Games. They started in probably the strongest heat but performed well to come fourth.

Their opportunity came in the repechage with two crews to progress to the semi-finals but they were outclassed finishing third. They won their C/D semi-final but finished fourth in final C. The home ground advantage for the bronze medal Greeks worked as they had finished eleventh in 2003.

If ever we had a determined four to win gold, it was this crew. It was probably the last chance for Simon Burgess and Anthony Edwards to win gold. Both had been in the 2000 four which won silver and Edwards had also picked up Bronze in the double scull in 1996. However the desired result was not achieved due to an equally determined Danish crew who started favourites.

The Australians allowed the other crews a little too much latitude in the first 500 metres but regained a good position in the second and third 500 metres. However the Danish crew still had something in reserve in the rush home extending their lead to 1.4 seconds at the finish.

The Bronze medal was decided by 0.05 second.

Photo galleries of the 2004 Athens Olympics