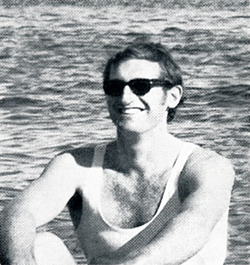 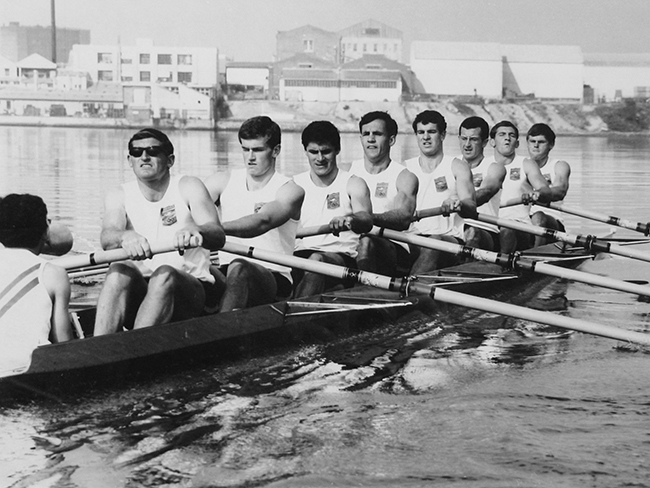 The Committee has resolved that Alf Duval, Jnr., be nominated for life membership at the Club's Annual Meeting. The club is very proud of Alf's outstanding ability and leadership on the water. He joined the club in 1956, but did not win his first maiden race till the 1958-59 season. He also won three Junior races that same sea­son.

[n 1960 he won his first senior race and was also in the winning Gold Cup crew. He was called up in I 961 and tried out for State crew, being one of the last to be eliminated. Selected in King's Cup crew in 1962, he has been a member of each crew since, rowing in eight King's Cups which would be a record.

Alf was selected in the four that represented Australia in the Olympics at Tokyo in 1964. He was in the Australian eight in three test races against New Zealand in 1965; was a member of the coxed four that represented at the World Championships, held in Yugoslavia, 1966. This crew also rowed in many races in Germany and Switzerland.

In 1967 he was selected in the Australian eight that went to Canada and U.S.A., and then to France, for European Championships.

On his return to Australia he was selected in the four to represent Australia in New Zealand and was also elected Captain of the rowing squad. Quite a few people were surprised when on his return from New Zealand it was decided that he would row in the stroke seat of the club eight. This proved to be a most successful experiment as Alf stroked the club and state crews to victory. He was selected to stroke the eight at Mexico and went on to win a Silver medal. This must have been a great moment for Alf and if you have seen the film of him receiving his medal it is easy to see what this meant to him.

On his return from Mexico, Alf was soon again rowing in the club crew, winning the State Championship and being selected to stroke the State crew.

It is doubtful if any oarsman has had such a long and distinguished career and we feel sure that all will agree that Alf is worthy of this high honour.