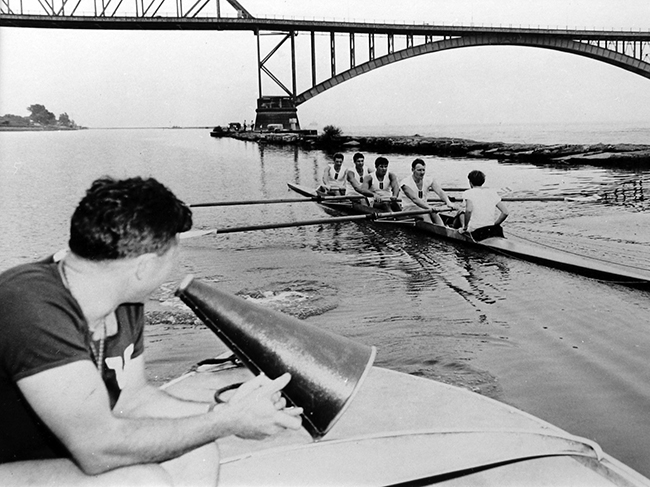 1967 Four in training in Canada - Stephen in the bow seat

Stephen tells the story of 1967. “I recall how Freddie took us through our first Kings Cup and on to be competitive on the world stage in just six months. Our average age was not much more than twenty years. The only international experience we had really, was Graeme. My everlasting memory is the honour of being presented with my gold medal by the revered Thomas Keller, President of FISA.”

To provide some background to this era, the World Championships for rowing commenced in 1962 and were held every four years until 1974 when they were held annually. In the other years, FISA endorsed other events such as the European Championships to provide racing.

In 1967, it endorsed the North American Championships as a FISA event and European crews attended the regatta at the expense of the regatta committee. Australian was represented by several crews including this coxed four from Victoria.  The race was therefore against the best in the world, endorsed by FISA and so the first sweep gold medal won by Australia in such company.

Steve is still excited about what happened. He recalls: “I still think about it, how Freddie took us out of a fairly ordinary Kings Cup eight and made us winners in six months. The only international experience we had really, was Graeme. Our average age would have only been 20”.