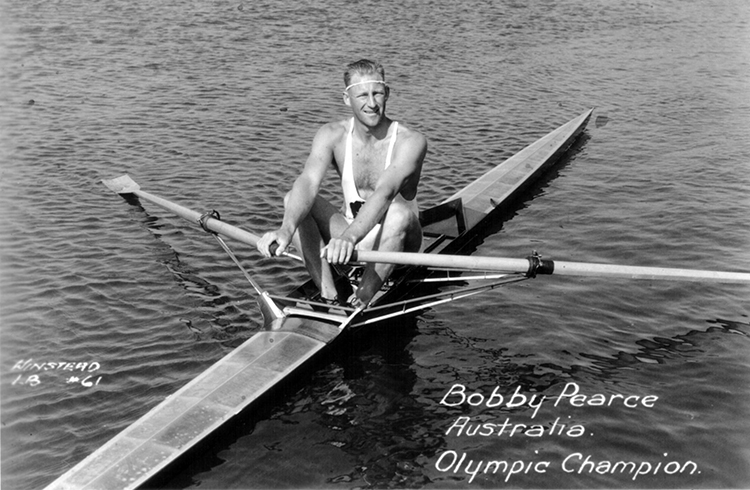 Inducted into both the Australian and Canadian Sport Halls of Fame

Pearce was the flag bearer at the Opening Ceremony of the 1928 Olympic Games for Australia. 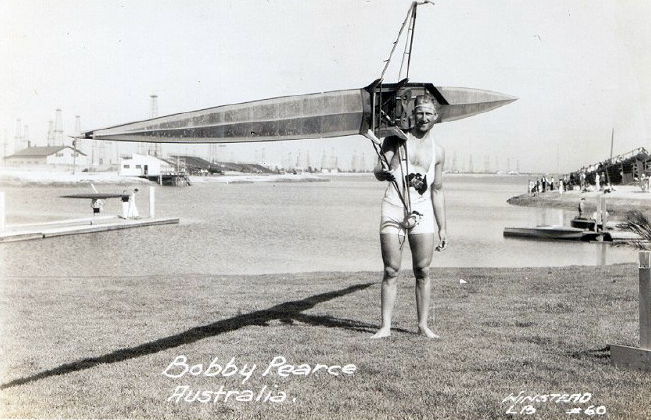 Arguably, he is Australia’s finest sculler and one of Australia’s finest athletes.  Pearce was a third generation Sculling champion.  He had hoped that after winning the Olympic gold in 1928, he might be able to race in the Diamond Sculls at Henley.  He was refused permission because he was a carpenter.  Back in Sydney he was out of work during the Depression, but when Lord Dewar, the Canadian whisky manufacturer, learned of Pearce’s plight, he offered him a job as a salesman.  Ironically, this new position allowed him to compete at Henley since he was no longer a labourer.  In 1931 he won the Diamond Sculls by 6 lengths.

Although he moved to Canada, he competed for Australia again in 1932 and won a second gold.  Following the 1932 Games, he became a professional Sculler and retired undefeated in championship racing.

His supremacy in professional Sculling created the difficulty of finding challengers and allegedly led to the reduction in public interest in professional rowing.  He served in the Canadian armed forces in World War II and retired from the navy with the rank of Lieutenant Commander in 1956. He took Canadian citizenship in 1972. He died in 1976 of a heart attack at the age of 70 years old in Toronto.

Rowing historian and academic Scott Bennett in the Australian Dictionary of Biography provided the following biography of Bobby Pearce.

Henry Robert (Bobby) Pearce (1905-1976), sculler, was born on 30 September 1905 at Double Bay, Sydney, son of Sydney-born parents Henry William Pearce, water police constable, and his wife Lily, née Shankleton, and grandson of Henry John Pearce. He was educated at Double Bay Public School and was employed as a carpenter by Eastment & Clark, builders.

Aged 6 Bobby first learned the skills of sculling from his father, a former Australian champion. Showing much natural ability, he won his first open race at 14. His first major success came in winning the 1926 Walker and Hall Cup, followed by the New South Wales and Australian (1927-29) sculling titles. Despite accusations of professionalism, Pearce was chosen to contest the Olympic title at Amsterdam in 1928, and surprised even his keenest supporters by the ease of his victory in world record time of 7 minutes, 11 seconds. That year, as an artisan, he was barred from competing at Henley-on-Thames.

On his return from the Olympics Pearce had great difficulty in finding work. In 1930 he won the Empire Games title at Hamilton, Ontario, Canada. He decided to remain there as a salesman for the Distillers Co. of Canada, and later transferred to another whisky firm, Seagrims. On 10 December 1930 at Hamilton he married his Australian fiancée Reita Hendon (d.1938); they had a son and daughter. His employment allowed him time to keep in training: in 1931 he won the Diamond Sculls at Henley (where a rule change allowed him to compete) and the Canadian and American titles. Although now a Canadian resident, Pearce was bound by the Olympic rules to represent Australia, and at Los Angeles in 1932 he became the first to retain the Olympic single sculls title. He earned official condemnation when he immediately turned professional in order to row for the world championship, a title he won at Toronto in 1933. Unfortunately professional sculling was in its final decline, and by the time he relinquished the title at the end of World War II, he had defended it only twice, in 1934 and 1938. He won the Lou Marsh trophy in 1938 as Canada's outstanding athlete. In Toronto he married a divorcee Velma Hilda, née Whelpton, on 20 July 1940.

Pearce was commissioned in the Royal Canadian Naval Volunteer Reserve as lieutenant in 1943. He was on the active list from 1946, was promoted lieutenant-commander in 1948 and transferred to the navy in 1951.

For much of this time he was sports and recruiting officer, H.M.C.S. Star, Hamilton. He remained very involved in sculling, working for the Argonaut Rowing Club as coach and administrator. In retirement from 1956, he lived at Toronto; he was to have been a rowing commentator at the Montreal Olympics, but died of heart disease on 20 May 1976 and was buried in Mount Pleasant cemetery. His wife and their son and the children of his first marriage survived him.

Standing 6 ft 2 ins (188 cm), racing at 14½ stone (92 kg), Bobby Pearce was impressive when seated in a flimsy outrigger. He was an 'athletic figure with an imposing facial structure and close-cropped, jet-black hair'. Observers agreed that the power of his sculling overwhelmed opponents, particularly in rough water. His claim to be the best sculler yet produced by Australia is high indeed; in 1986 his name was included in the Sport Australia Hall of Fame.