IOC Member in Australia (1910-1985)
The Committee was drawn to the nomination of Lewis Luxton not so much as a noted oarsman but for his fine work at the Olympic level. He brought great fame on the sport in Victoria and Australia.
1928 – APS Head of the River Melbourne Grammar stroke – unplaced
1929 – APS Head of the River Melbourne Grammar stroke – Third
1932 – Boat Race Cambridge University stroke – First (Lewis was the first Australian to Stroke a Cambridge crew and that he was accompanied by another, Bill Sambell, who had rowed with him at Melbourne Grammar.)
1932 – Olympic Games – UK Men’s Eight stroke - Fourth
1956 – Olympic Games – Executive Committee Member of the Melbourne Olympic Games Organising Committee 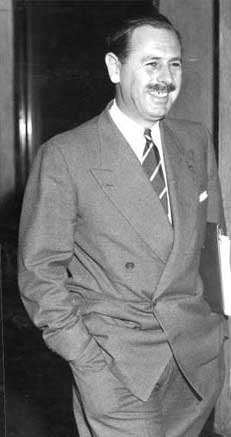 He commenced rowing at Melbourne Grammar and in 1928 and 1929 and was stroke of their first crew. He proceeded to the University of Cambridge (BA, 1933; MA, 1960), England, and made his mark rowing for Pembroke College. He gained a swimming Blue, competed at university games in Germany, and was stroke of the crew that first defeated the University of Oxford and then represented Britain in the 1932 Los Angeles Olympic Games.
His son James advised that his fathers great ambition in his youth was to row, first for the school and then for Cambridge University. Timing, talent, work and perhaps some luck produced the bonus of the first LA Olympics. He was always enthusiastic about oarsmen and rowing.

Luxton succeeded his father as an IOC member in Australia and served on the AOF Executive Committee for many years. He is credited with building up the AOF reserves enormously with his fundraising, thus leaving the AOF in a strong financially stable position. In 1980 he gave his casting vote against Prime Minister Malcolm Fraser’s forceful proposal to the AOF to join the American boycott of the 1980 Moscow Olympics. We are forever grateful for his leadership in that decision.

His father Sir Harold Luxton, jointly with Hugh Weir are acknowledged as winning the Melbourne bid for the 1956 Olympic Games when Melbourne defeated Buenos Aires by one vote.

However it fell to Lewis to address the local squabbling that was undermining preparations for Melbourne’s 1956 Games. Following an ultimatum-laden visit by IOC president Avery Brundage, Luxton became full-time deputy-chairman (1955) of the Olympic Games Organising Committee. Promoting the Games in the United States of America and England as a great amateur event, not a contest for national supremacy, Luxton insisted that 'no one wins the Olympic Games'. His role in the Melbourne Games’ success was recognised when he was appointed CBE in 1957. In recognition of his service to international sport, Lewis was made an honorary member of the IOC upon his retirement in 1974.