Campbell was an Australian who was educated at Melbourne Grammar School before going to Cambridge University. he was a very successful schoolboy rower.

He was an RAF cadet towards the end of WWI and was demobilised in December 1918.

He continued his rowing success in England whilst studying at Jesus College, Cambridge.

He rowed for Cambridge in the Boat Race in both 1920 and 1921, winning on both occasions. 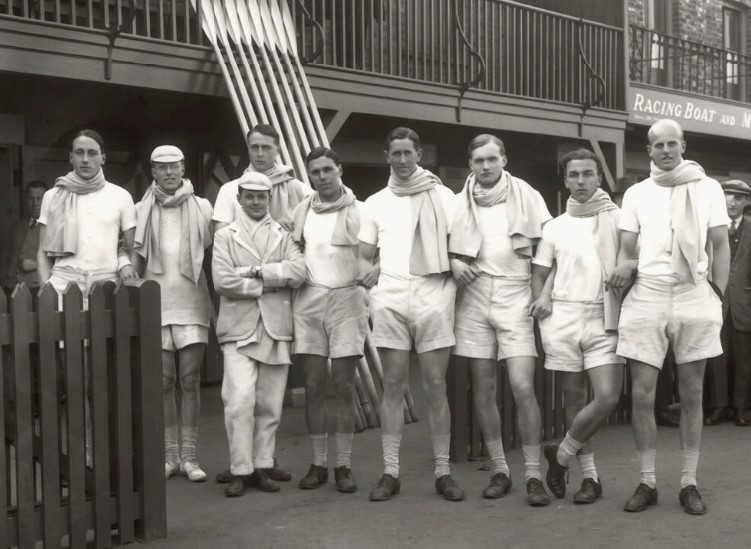 Cambridge crew - John is fourth from the right

He also competed as a British rower who won the silver medal in the eights at the 1920 Summer Olympics, at Antwerp.

He returned to Australia after University and was a grazier at Drysdale Victoria, near Queenscliff.

In 19th January 1939, at the age of nearly 40, he enlisted in the Australian Militia Forces. He was pronounced fit.

He died one month later, and one can only assume that it must have been from an accident. He is buried at the Boroondara Cemetery with his wife Beatrice Helen Campbell.

His obituary in the Australasian on Saturday 11th February 1939 by R. W. E. Wilmot was as follows:

On the same day that Major Cunningham died, there passed away at Geelong Mr. John A. Campbell, an Old Melburnian, who distinguished himself on the river and in the Great War. He was a member of the Melbourne Grammar School crews of 1917 and 1918. The latter crew, stroked by Robert Weir, won the Head-of-the-River race, and less than a month later he sailed for England and enlisted with the Royal Air Force as a flying cadet, but had not finished his training at the date of the Armistice. Having been demobilised, he entered at Jesus College, Cambridge, and, gaining his Blue, rowed in the Cambridge winning crews of 1920 and 1921 and was president of the Cambridge Boat Club in 1921. He was a member of the famous Leander crew which represented England at the Olympic Games regatta at Antwerp in 1920. On his return to Australia be went in for a pastoral life, and owned Soho, at Drysdale, Victoria, and Dungaleer, Walgett (N.S.W.). He leaves a widow, two sons, and a daughter.