The winning King's Cup crew again had the right to be selected as the Australian eight. Victoria won by half a length from Western Australia in second place with Tasmania third.

The single scull was also to be selected from the President's Cup event. Stuart MacKenzie, who was then in England and who had won the Diamond Sculls at Royal Henley in 1961 for the fifth consecutive time, was advised that he had to compete in the President's Cup to be selected. He did not compete in the selection event which was won by Ian Tutty who was duly selected to represent Australia at these Games. Squires of Tasmania again finished second.

The NSW coxed four coached by Phil Cayzer were racing well in this event but stopped before the line allowing the Victorian combination from Corio Bay Rowing Club. The coxless four was won by a Mosman Rowing Club combination of Hatfield, Grace, Raper and Ninham. Ian Tutty and Barclay Wade won the double scull.

It was thought that Tutty should concentrate on the single scull and so Squires from Tasmania partnered Wade in the double scull.

There was dissension amongst the members of the originally selected coxless four, the pair, their coach and the manager. This resulted in Raper being replaced in the pair by Hatfield, and the Victorian emergencies Newcomb and Boykett coming into the four. The report of Noel Wilkinson stated that the lack of unity within the team probably cost Australia one gold medal as the four missed out on the final by 2 feet in the repechage to the eventual winners, England. He said: "Our crew would have been capable of winning a gold medal if two members involved had accepted a necessary change which in the selector's view was an improvement, and if they had got down loyally and consciencientiously to the job." He went on to praise the efforts of Boykett and Newcomb in fitting in at short notice.

"The VII Commonwealth Games are remembered for its 'heat, dust and glory'. The day before the Perth Games opened the temperature was an expected 80 degrees Fahrenheit, but the heat was measured at 105 degrees at the opening ceremony in the new Perry Lakes Stadium the following day and such extremes persisted throughout the Games' duration. In the previous 65 years, only 10 100 degree plus days had been recorded in Perth. Australian soldiers were pressed into action, ferrying water to competing athletes.

"James Coote of the London Daily Telegraph describes: 'The VIIth Commonwealth Games have proved that it is possible for an area as basically devoid of sports interest as Perth to stage the second most important sports meeting in the World - and stage it successfully. Perth has shown that these Games will continue for years to come.'

"For Perth, the staging of the Commonwealth Games provided it with a springboard for phenomenal development in sport and recreation, centered around the sports facilities that were built for the Games. These facilities have catered not only for elite sport but provided much needed opportunity for the development of organised recreational sport as well as a focus for Australia's first University Degree Program in Physical Education."

Thirty-five countries sent a total of 1,041 athletes and officials to Perth. Jersey was amongst the medal winners for the first time, whilst British Honduras, Dominica, Papua New Guinea and St Lucia all made their inaugural Games appearances. Aden also competed by special invitation. 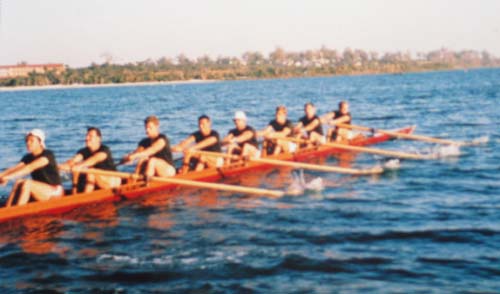 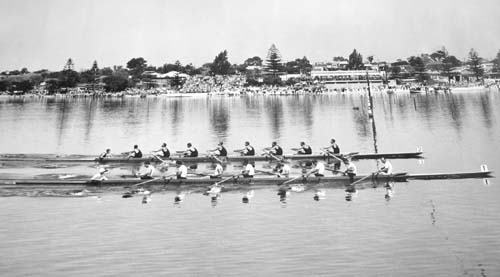 Manager: Ray Todd (VIC)
Jury: Alec McLeish (VIC)
Grading Committee: No grading committee was required as the AARC permitted all events to be entered provided that funding was a State and Empire Games Committee issue.

Men's Coxless Four
1st England 6:31.1, 2nd Wales, 3rd Canada
The Australians missed the final by 2 feet to the eventual winners England in the repechage. This was a good result considering the last minute changes to the crew.

With 700 metres to go the Australians were down by clear water. They rowed through the New Zealanders to win by 2 feet to the delight no doubt of the Australian judge Alec McLeish