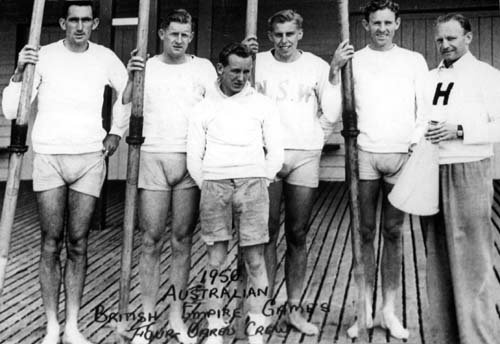 The eight was the winning King's Cup winning crew from NSW. A test race for the four was conducted at Lake Wendouree on 3rd December 1949 which was won by the Haberfield crew.

A week later the test races for the single double and pair were conducted on the Nepean. Wood scored an easy win in the single, the Wood and Riley combination disposed of the Webb and Rawlins combination by five lengths and the pair race was declared a no race due to interference from a broken down umpires boat. Subsequently the Victorian crew of Webster and Lambert were selected.

This was the first time that Lake Karapiro was used as an international 2000 metre course. The lake was built as part of New Zealand's hydro electricity scheme. The rowing village was at the Lake using the work men's huts as accommodation and the communal area as the dining room.

The organising committee had a huge job constructing all the facilities and course for the event. The decision to use the course and the great amount of work required resulted in a superb course and regatta. The conditions were also favourable and the eights race in particular, was a highlight of the event.

"World War II interrupted the staging of the British Empire Games scheduled for 1942 and 1946, however the enthusiasm from within the British Empire to continue what was started in 1930 was still strong enough for interest to be shown in their revival.

"Awarded to New Zealand, the IV Games were held at the nation's largest city, Auckland. New Zealand had never been the focus of so much sporting attention and the hosts responded in a most magnificent and hospitable manner.

"The opening ceremony at Eden Park was attended by 40,000 spectators, whilst nearly 250,000 people attended the Auckland Games, paying out a total of £89,435 as event spectators.

"The atmosphere of the Opening Ceremony is best described by this paragraph from the Official Record of the Games:
'The entrance of the gladiators in the days of ancient Athens and ancient Rome could not have been more impressive than was that Parade at Eden Park on the afternoon of February 4, 1950.

'As one, the crowd excited by the majesty of the colourful scene, wonderful too in its simplicity, rose to its feet to remain standing throughout the ceremony, cheering to the echo as the parade passed on its way around the stadium...' " 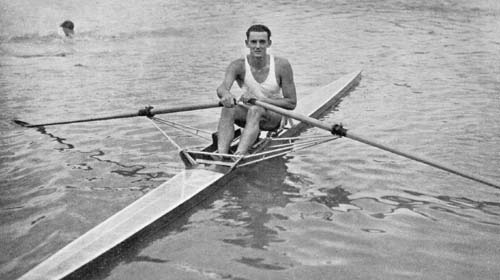 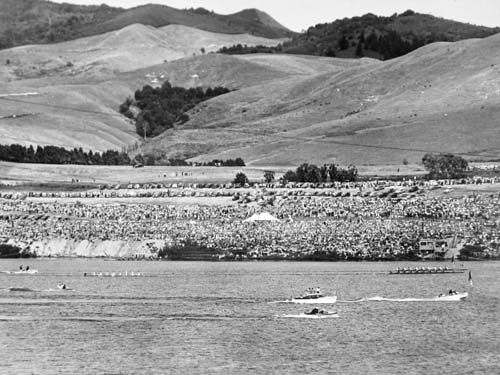 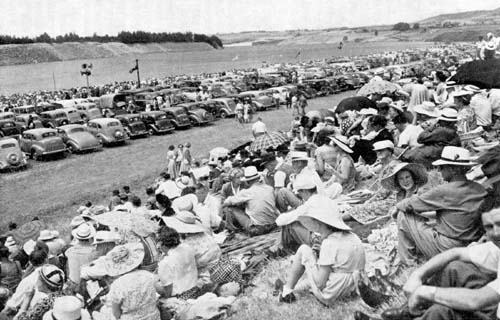 Merv Wood did not have this race to himself. He had to scull through the field to win and introduced some drama to the race with a faulty stroke early in the race allowing his competitors through. The margin of about 3 1/2 lengths was clear and the race was won by the 1000 metre mark.

An easy win to the Australians who gained control of the race in the first 1000 metres.

The Australian crew led from the first stroke and was never threatened.

The Australians fought well in the early stages of the race but the strong New Zealand crew had 2 lengths by 1500 metre mark and went on to win easily.

The Australian eight started well and gained almost a length lead over New Zealand in second place and the British crew a further length behind in third place by the 500 metre mark.

By the 1000 metre mark, New Zealand had reduced the margin to half a length. By the 1500 metre mark the New Zealanders had drawn level with Australians with the British crew three lengths behind. 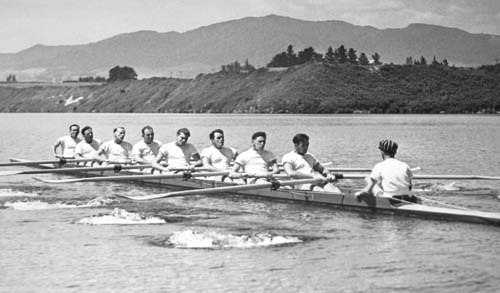 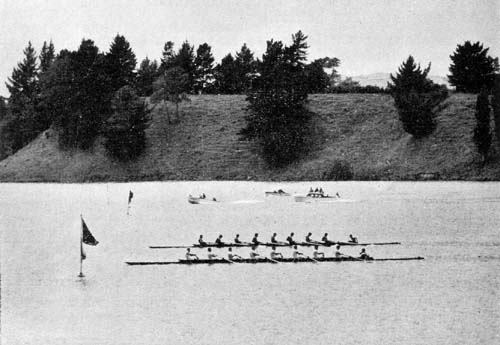 Australia (in foreground) beats New Zealand by one foot