David Bagnall provided the following report on the regatta in the Australian Rowing magazine of February 1987.

The annual Australian Veteran's Championships were held on Lake Burley Griffin on 18th January and the standard of competition was as tough as ever. Perennial Bob Bradley (ANI) won the E Sculls (52 to 60 years) and the handicap double (with Ken Goswell of Tweed Heads) but lost the D Sculls (45 to 51 years) to Alan Turner of Balmain.

Another dual winner was Graham Nix (Manning River) who had wins in the C Sculls (38 to 44 years) and B Pairs (32 to 37 years with Roy Haliday. All the scullers are training and racing as hard as ever.

Former rugby league and rowing international Dennis Tutty was a late replacement in the Haberfield/drummoyne D Four which won from the Rocky Mountains (USA)/Haberfield composite crew. Tutty combined well with Ian Toll, Fred Griffin and Terry Hayes to win by about one lengthafter being behind in the early stages of the race. They showed better technique than the composite crew who faded in the second 500 m.

The A & B class Fours races involved the same crews coming first and second with Mercantile beating Toowong/GPS Old Boys by margins both times.

In the women's events, ACT competitors did particularly well. Carol James of ANU won the sculls and combined with second placed Kathy Findlay of ANU, to win the double sculls. James has shown vast improvement in the last few months after taking up rowing at an age when most rowers have retired.

In the women's pairs, Lydia Miladinovic (Glebe) combined with Evelyn Adams (Narrabundah) for a comfortable win. This crew last raced together in 1974 at the World Championships when they were Australia's first women's crew to go to the world titles.

Victorian crews dominated the Men's E class events. Banks came first and third in the fours with Hawthorn/Albert Park second while Banks were too good for the younger crews in the handicap eights.

The only F class event (over 60 years) was the Men's F Sculls and it was stylishly won by Bill Andrews of Sydney Rowing Club. Generally the older crews appeared to enjoy their rowing a lot while the "younger" veterans were chasing the wins. 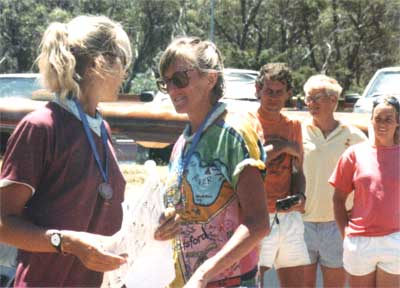 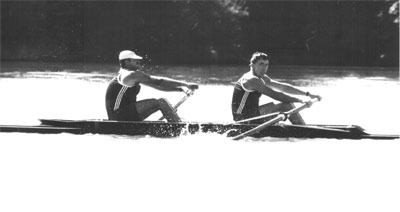 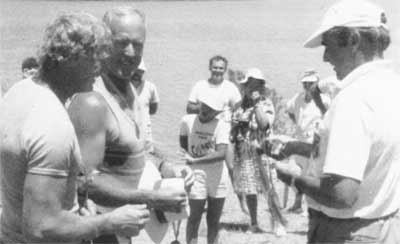