The World Junior Championships were conducted on the Olympic course from the 7-11 August 2019. It doubled up as the trial event for the 2020 Olympic Games.

Australia was pleased to win one gold in thge men's double scull from rowers from WA and Victoria, coached by Jamie Hewlett. 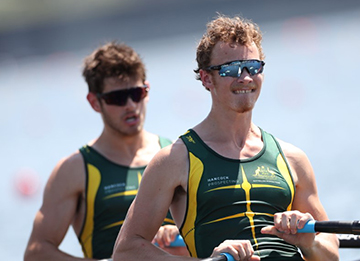 The duo, from Perth and Melbourne respectively, did not lose a race throughout the regatta and today walked away with a gold medal in Tokyo on the final day of the 2019 World Rowing Junior Championships.

“We’ve training for the last two years to try and achieve this, so it’s a really special moment,” said West Australian Henriques.

“The dream would now be to represent Australia – both at U23 level and then ultimately at the senior level,” he added.

Rowing Australia Deputy Performance Director, Jaime Fernandez said, “Congratulations to Hamish and Harry for a fantastic 2019 Junior Worlds campaign. They, alongside coach Jamie Hewlett, have not only performed consistently throughout the week to deliver gold in the A-Final, but have been a standout crew from the point of selection. The crew’s potential was obvious, however a good deal has to align and go well throughout the campaign for an amazing result like this to be assured.

By the hallway mark, Henriques and Fox were out in front, leaving it to Germany and Italy to duke it out for silver and bronze. As the crews approached the final 250 metres, Australia upped their rating to 39 to hold off a late challenge from Germany who in turn were trying to get ahead of Italy. Australia went to 41 strokes to cross the line and take gold, while Germany took silver and Italy bronze. 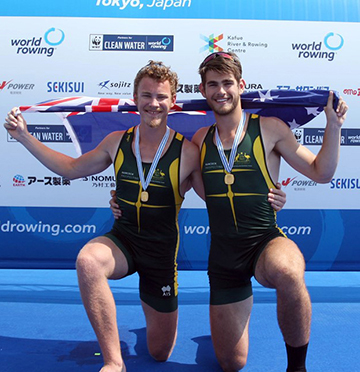 The Australian four finished last in their heat, second last in their repechage and so ended up in the B final. Sadly they were off the pace for this event.

The Australian coxed four raced a great repechage to make the final but sadly were not in the race for the medals giving away a little in every 500 metres.

The Australian double started the regatta well with a good race in the heat. Sadly they narrowly missed the cut for the A/B semi finals in their repechage. Their semi-final saw them well placed through the first 1500m but were unable to match the other crews in the final stages of the race.

The Australians raced well to make the final going through the repechage to qualify. However they were off the pace in the final, well off those on the podium.

The Australians qualified for the final through the repechage but sadly were off the podium pace in the final. 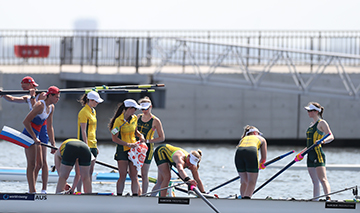