Unfortunately the Australian team did not come back with any medals from these Championships, either in the junior or senior events. The medal table summary is attached.

Plovdiv is the second biggest Bulgarian city, situated in the most prosperous region of the country, not only in terms of natural resources and economic output, but also in terms of cultural and historical heritage. The population of Bulgaria is 7,093,635 (July 2011 est.). The city of Plovdiv has a population of approximately 560,000 including the suburbs.

The regatta course is located in the center of the city of Plovdiv. It was first opened for competitive events in 1988. It has many permanent facilities and can hold eight training and seven racing lanes. The course is in line with the nearby river “Maritza”. The regatta course has hosted the 1993, 1998, and 2007 Balkan Rowing Championships as well as the 1999 World Rowing Junior Championships and the 2011 European Rowing Championships.

The course at Plovdiv 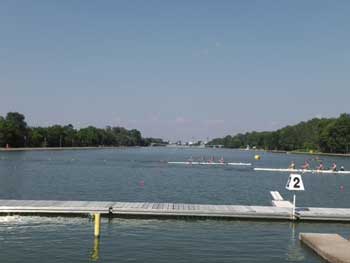 The course at Plovdiv