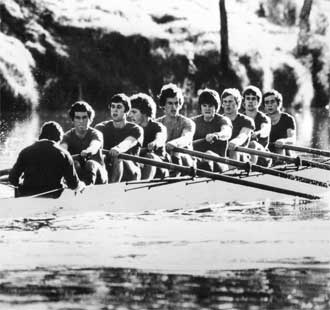 The background for this tour is outlined on the World Junior Championships home page. The standard of racing proved that Australia had world class schoolboy rowing, but junior rowing was another step higher requiring stronger and taller athletes to win. The Australian crews were simply out gunned in the very strong head wind conditions prevailing throughout the regatta.

David Boykett, the manager of this tour, made some very pertinent comments in his report which were well ahead of his time:

Australia should be represented again. It is well worth the effort. I know of no country with aspiriations to Gold Medals at Senior level that has as little "in depth" organization and forward planning as Australia . It is very obvious that those countries achieving good results in International Competition are those which are organizing and harnessing the full range of resources available. England did well in the Junior Championships. They now have a Senior National and Junior National Coach - both full time. Part of England 's new success is the result of racing in Age Groups. I witnessed their National Junior Championships in the seven classes of boats U16 and U19. There was some good racing. In 1962 when I rowed in the lst World Championships in Lucerne we were at the forefront of Junior Rowing in the world. We have improved but we have been eclipsed by other nations.

1. That National Junior Championships be instituted and that age Group racing be fostered say U16 and U19 (December 31st).

2. That the A.A.R.C. set up a Sub-Committee empowered to raise money for the A.A.R.C. for Overseas Representation.

3. That the Grading Committee be asked to produce a "Blueprint" for Australian Representation Senior and Junior for the next five years. That such document state `Specific' Objectives and the requirements of the selectors as to the provision of racing for, or methods of selection. That such plan be upgraded after each such representation.

4. That the A.A.R.C. make representation to the Rothman's Foundation for sponsorship of a "National Coach".

The coach's comments on starting procedures in his report were also well ahead of his time.

The Regatta was well run, although as an ex athlete, I am very critical of the Flag Start which is used in International Racing. FISA goes to endless trouble to ensure fair racing and yet we saw many crews gaining an unfair advantage by anticipating the flag drop. FISA should investigate the starting methods used by starters at international Track and Field Competitions.