A moderate cross head breeze in the morning freshened by late morning. This led to a redraw of lanes in the finals to place the seeded crews into the favoured lanes. In the end the breeze moderated and the redraw was unnecessary. However it could not be undone.

There was controversy before the regatta began with Melbourne Grammar first and second crews being relegated to last in their heats due to an infringement of APS training rules. With seeded heats from the results of the racing at the Scotch Mercantile regatta, this could have been an issue in adverse weather conditions and lane seeding being implemented.

Full results can be found through this link. 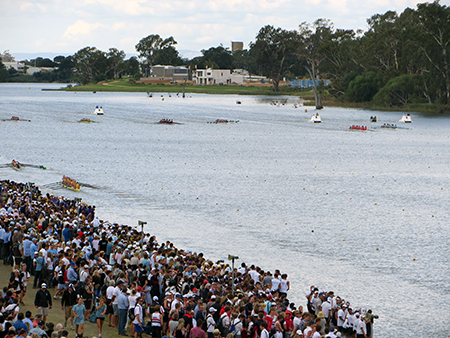 Scotch won their fourth Head of the River in a row whilst Caulfield won their second in a row in the girls. Both races were fiercely contested. Scotch had a field day wining all the senior races with large margins.

Boys Head of the River

Girls Head of the River