Four crews competed in the eleventh Head of the River held on Tuesday 13th and Wednesday 14th May 1878 on the Upper Yarra.

Geelong Grammar won the event for the first time with a crew containing the great Steve Fairbairn, who was to go onto being one of the world's most influential rowing coaches. The Fairbairn Cup is named in honour of Stephen's bother Charles, the first Captain of Boats of Geelong Grammar.

Geelong Grammar, through it's coach J L Cuthbertson, started to lobby for eight oared races and continued until the Headmasters agreed in 1901.

Controversy over the use of sliding seats commences with fixed seats used until 1897. 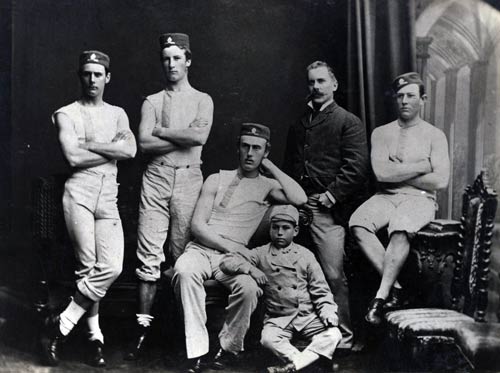 The Argus reported on the final.

The final heat for the possession of the Sumner Public Schools Challenge Cup was rowed yesterday afternoon on the Upper Yarra, the course being from the Prince’s-bridge to the Botanical-gardens bridge. On the previous day the GGS crew had beaten the Wesley crew and the MGS, who held the cup during the past year, had beaten the Scotch College crew. The contest yesterday afternoon was between the two winners of the previous day. The Geelong crew were the favourites at the start, as they were known to be in splendid form, and the result justified the confidence placed in them, as they led off quickly from the start, gained on their opponents throughout, and won as they chose at last by four boats lengths.

The Argus also reported on the heats.

The Geelong crew went ahead from the start, gained all the way, and won with great ease by about three boat’s length.

This race was a very good one. The Scotch College crew took the lead, and gained on their opponents for about 400 yards until they were nearly a length ahead, but their opponents rowed on pluckily, and by the time Brander’s ferry was reached were on level terms. From that point to the end of the race the Grammar School crew, who are the present holders of the cup, kept increasing their lead, and notwithstanding the best efforts of the Scotch College crew, won by two lengths.

(This event was raced on Friday 27 and Saturday 28th September on the Upper Yarra and so not part of the Head of the River event.)

The final was eported by The Argus.

After a deal of delay, not caused by them or the starter, the two crews were dismissed by Mr. Hodges to a capital start. Melbourne on the north side, had the best of the stream at starting and led slightly, rowing somewhat the faster stroke. Rounding the bend to Brander’s, Geelong, helped by position, led, and gradually improved their advantage till they had drawn just clear, when their coxswain, endeavouring to cut over a buoy and save his distance, brought the blade of his 2’s oar crashing against it. Stroke could not row, and 2’s oar could not be got out till all way was off the boat, by which time Melbourne had just changed positions and had her rudder level with Geelong’s bow. The Geelong stroke seemed for a moment inclined to give up, but encouraged by shouts from the bank, took heart of grace and went at it like a tiger and wore the Melbourne down, and favoured by the corner above Prince’s bridge was again just clear as they turned into the straight run home, when Melbourne, whom everyone thought played out, put on the most splendid spurt, for which Vance, their stroke, deserves infinite credit. Geelong, exhausted by their former effort, could go as they were going but no faster, and half a foot a stroke Melbourne were coming up till they brought their boat level. Then their bolt was shot, they fell back a little, and finally lost by about 10ft.

The Argus reported on the heat as follows:

The competing crews started very evenly, and for two-thirds of the race were never clear, first one then the other holding a slight lead, but at last the Geelong, favoured by the bend, succeeded in winning by about a length.