The thirteenth Head of the River was again conducted on the Upper Yarra, this time on 17th and 18th May 1880.

Geelong Grammar wins the Head of the River despite a year of turmoil in which floods washed away their new shed and boats, and a new shed was built. Three boats were recovered at Corio. 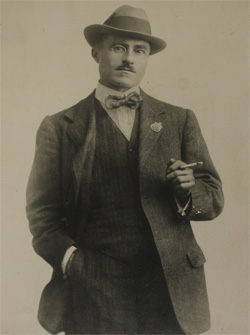 From John Lang's book the Victorian Oarsman and Rowing Register 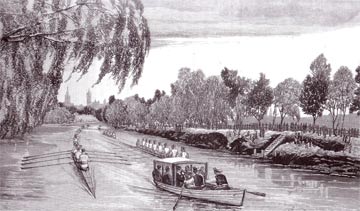 From the Australian Sportsman

The Age reported on the finla in the following manner:

The final heat between the Geelong Grammar School and the Melbourne Grammar School took place yesterday afternoon. The Melbourne Grammar School boys won the toss, and of course selected the south side. Both crews got off well when the start was given, and rowed neck and neck to the first corner, where the Melbourne lads drew away nearly a length. When round the corner the Geelong crew drew up nearly level, and the two boats kept close together all the way up the long reach. When the baths corner was reached, the Geelong men, having the inside running, rapidly drew ahead, and finally passed the judge nearly two and half lengths clear. 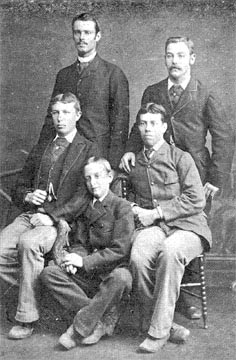 The Geelong Advertiser took a keen interest in the heats and reported:

After some delay at the starting point, the Scotch caught the water first and got away with a slight lead, and increased it in a short distance to a ¼ of a length. They were rowing rather loosely, however, while the Grammar School boys were pulling with better swing and catching the water well together. The latter soon drew up, and rounding the first beacon had deposed the College, and led by half a length. They gradually increased this, and at the pontoon sheds were a length clear in advance. At Brander’s Ferry they were about three lengths ahead and rowing well within themselves. The race was virtually over at this point, but rounding the dangerous bend the College, favoured by their position, slightly drew up. This spurt, however, was of no avail as the Geelong crew got around the corner well ahead and won comfortably by 5 lengths.

This heat was most uninteresting, as MGS was never pushed during the race. They were the quickest to catch water, and went away with a lead, which was increased whenever they chose to exert themselves, and eventually they won easily by three lengths.

(This race was competed for on 1st and 2nd October 1980 and so did not form part of the Head of the River regatta.)

The Geelong Advertiser reported on the final in the following manner:

The boats got away to a fair start, in which the light blues had a little advantage, which they slightly improved and held for a couple of hundred yards, when the Melbourne Crew drew level. A fine race then ensued, both crews rowing oar and oar, but soon the south shore boat began to draw away, and the Geelong boys were in difficulties. Coming into the more open water it was clear that all chance for the crew astern was over , as the water was very bumpy and the force of the wind so great as to prevent the oarsmen from getting well forward. The other crew, in comparatively smooth water, and favoured by the inside position, still further improved their lead, and finished a length and a half to the good of the Geelong Grammar School.