The twenty-fourth Head of the River returned to the Lower Yarra and so allowed all four crews to compete in the one race. The race was conducted on 15th May.

The race was one of the best ever staged in APS history. Not only was the margin between first and second three feet, only 2 feet separated second and third and 3 deet between third and fourth.

One of the two Scotch coaches was Stephen Morell, later Sir Stephen Morell, Lord Mayor of Melbourne and President of the Victorian Rowing Association. He was a good oarsman of his time.

Wesley rebuilt their boat shed on Albert Park Lake after its destruction the year before. 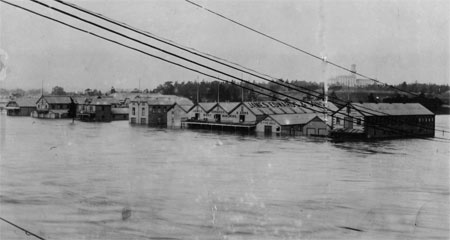 The Age reported as follows:
Wesley jumped away very quickly at the start, with Geelong & Scotch close up. In the first hundred yards Wesley got a few feet, Scotch and Geelong rowing stroke and stroke on level terms, Melbourne Grammar School falling in the rear. The three crews Wesley, Geelong and Scotch were rowing at top speed and in spite of the best exertions could not separate. Geelong were rowing in the best form. Scotch were using their superior power very well while, by dint of great pluck, and good condition, which enabled them to keep up a rapid rate of striking. Wesley were making a great race and were leading by a few feet at the three quarters of a mile. Effort after effort was made by Geelong and Scotch to draw ahead of one another, but spurt was answered by spurt and neither could shake off the plucky Wesley boys. When a mile had been rowed, and the three crews had been abreast for some distance Geelong made a brilliant dash and forged a few feet ahead of Scotch, Wesley losing a few feet. The last 200 yards the race was most exciting. No sooner had the “stroke” of the Geelong finished his spurt than the stroke of the Scotch College called upon his crew and at the same instant the Wesley made his final and best effort. From the steamer the three crews appeared to be exactly level as they dashed past the winning post and the report of the Judge’s pistol was heard. The verdict Scotch by three feet, Wesley two feet ahead of Geelong – was soon forthcoming and hearty cheers were given for the crews. Melbourne Grammar School had been passed by the steamer early in the race.

Thus ended the finest race ever rowed between our public schools and it will be long time before we see such another. 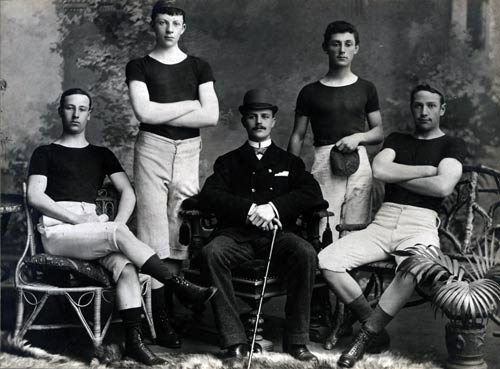 (This was raced on 9th and 10th October 1891 on the Barwon and so not at the Head of the River regatta.)

The Argus reported this race:

Wesley got off much the best, but Whittingham rowing a very lively stroke soon bought his boat alongside, and off the Austral Paper Mills had half a length to the good. In this position they rowed for 300 yards, the Wesley boys sticking to their work with the utmost determination. The longer swing and the greater weight, however, of the Geelong Boys told its tale at the half mile mark they were a length and a quarter on, and rowing very hard to the finish were winners by four lengths. Time 5 min 51 sec.

Charles Shannon acted as Starter and umpire whilst David Strachan acted as judge.

After some delay Mr. Shannon got the boats off to a good start. Wesley first showed in advance, but a crab caught in the first 100 yards enabled St Patrick’s to get alongside. The Wesley boys, however, livened up and rowing at 42, took a lead of their opponents. Then the St Patrick’s caught a crab, and Wesley went fast away, in spite of game efforts of their opponents. Finally Wesley won by 5 or 6 lengths in 6 min 15 ½ sec.

The two Grammar schools got off pretty evenly, Melbourne being a trifle the liveliest in the water, but Geelong rowing longer drew up, and after 300 yards had gained a ¼ of a length. Slowly drawing away the light blues had a bare length to their credit. At the half-mile mark, both boats rowing with the utmost determination, spite of the game efforts of the dark blues, the Geelong lads gained slightly over the last ½ mile and won an excellently contested race by a length and ¾. Time 6 min 2-5th sec.