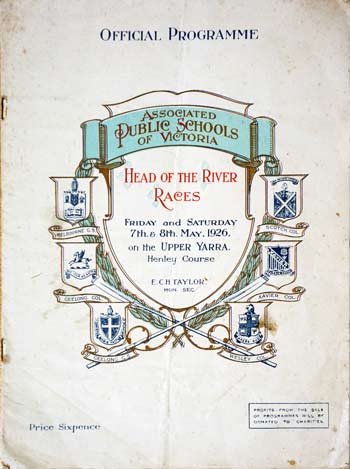 The fifty-ninth Head of the River was conducted again on the Upper Yarra course. Scotch won again but by less than in the previous year in a close race. They were coached for the first time by Charles Littlejohn.

The heats were conducted on 7th May and the final on 8th May.

Xavier missed out on the final by only 2 feet.

An innovation this year was the introduction of discs numbered one, two and three, representing north, centre and south lanes, which were suspended by wires across the river. This assisted coxswains with their steering and in particular obviated the possibility of the crew on the south station being pushed off its course. A commentator of the day suggested that "this innovation was very satisfactory, and could safely be adopted by the Henley authorities." 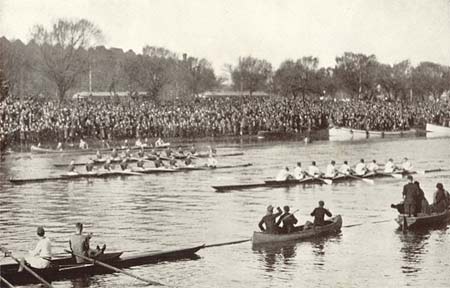 The exciting finish of the Head of the River 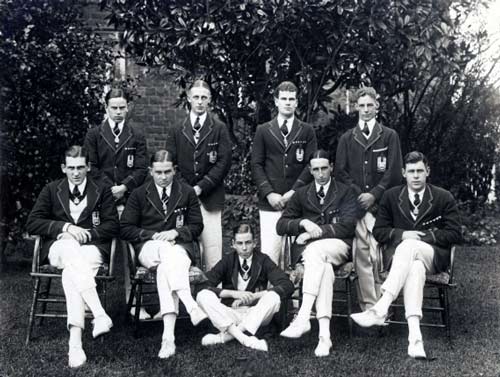 The following sad story of the coach of the Melbourne Grammar crew coach E W Tulloch which appears on the MGS website:

A cry of “I have got you now” were the last words spoken by decorated soldier, businessman and MGS First VIII Rowing Coach Eric William Tulloch (OM 1899). Tulloch had retired to bed early on 7 May 1926 after an impromptu dinner dance at Lauriston Hall boarding house in East Melbourne to celebrate the School’s emphatic win in its heat of the Head of the River on the Yarra. In the early hours of the following morning, Tulloch had disturbed a burglar and had characteristically sought to disarm and capture him. In the struggle that followed, Eric Tulloch was shot through the heart and died at the scene......

Understandably, in the wake of the news of their coach’s murder, the distraught 1926 crew had some decisions to make. In the end the decision was a simple one, as they believed that Eric Tulloch’s wishes would have been for them to compete in the final as planned. A brilliant race ensued with Scotch College being the ultimate winners by a canvas length from Geelong Grammar School, with Melbourne Grammar two feet away in third place.

The Age reported on the final.

The crews got away evenly to a good start. Immediately after, Wesley were striking at 34 and Scotch 36. Approaching the Botanical-Bridge, both crews were together with the rowing of Scotch more firm and decided. Leaving the bridge, Wesley had the nose of their boat in front. On reaching the corner, Scotch made a great effort, and succeeded in drawing level. On straightening up Scotch slowly drew away and gained a lead of half a length. Wesley quickened but could make no impression. To this finish Scotch gradually increased their lead, and passed the post with a clear length to spare. Time 6 min 3 ½ sec.

At the gun the crews got away nicely, Melbourne Grammar striking at 40 and Geelong College at 36. Grammar, rowing with plenty of life, had their boat running well, and at the bridge had a lead of ¾ of a length. Geelong College picked it up nicely at the corner, and reduced the lead slightly. On entering the straight Grammar were a length in front, and striking 32 in comparison with 36 by Geelong. The Geelong lads were rowing finely, and made two unsuccessful efforts to reduce the lead. At the stone wall Grammar, by good clean uniform rowing, went still further ahead, and increasing their lead to the finish, won by two lengths and a half. Time 5 min 57 ½ sec.

Conditions were boisterous at the start. Both started off at 36, and raced hard for a lead, where only 2 feet separated them, and in Xavier’s favor. Grammar’s rowing was clean and hard, and Xavier were showing a nice turn of speed. From the bridge, Xavier, rowing a fast rate, increased their lead to a canvas. Coming down the straight the lead was increased to a 1/3 of a length. At the stone wall Grammar, swinging beautifully together, responded well, and slowly began to close on Xavier. Then it was a great tussle to the finish. With 50 yards to go Xavier quickened, but the rowing went to pieces and Grammar finished strongly, overhauled them in the last few strokes and won by 2 feet. Time 5 min 33 ½ sec.

The Sporting Globe described the race as follows:

The Scotch were first away, and at 200 yards led from Grammar by a canvas.  A little further on Grammar went in front, and without being fully extended, won by ¾ of a length from Scotch with Xavier, who finished very fast, ¾ of a length away third.

Second crews racing over half a mile on the Upper Yarra - shortly after the start.

The date of this photo has not been conclusively identified but there is strong evidence that it is 1926. Note the cars following on the north bank of the Yarra on Batman Avenue.

The Sporting Globe described this race as follows:

Grammar were first to show out and quickly established a lead of half a length, which they increased to ¾ of a length at the stone wall. Then Scotch challenged determinedly and gradually bore down on Grammar; but their fine efforts were too late. Grammar won a great race by two feet. Wesley were a length and a ¼ away third and Xavier a length further back.