The third Head of the River race was conducted on 24th June 1870. It was originally scheduled for 16th June but the Scotch College crew needed a substitute for the two man who had been injured at football.

This was resounding win for Melbourne Grammar who led all the way in their first win.

This was despite the Scotch crew containing both the winning stroke and coach from the crew of the previous year. 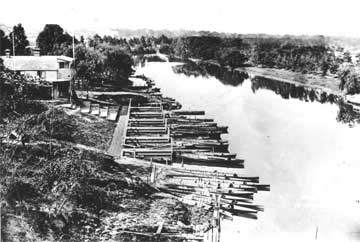 The Australasian reported on the race.

…The course was the usual regatta one, except that the winning-post was down stream, at Edward’s, the race being with the current instead of against it. After some delay at the starting post, Professor Irving, who kindly acted as starter, let the two off well together, neither of the boats however being properly handled. The Grammar School, rowing much quicker stroke, soon pushed ahead, and rounded the baths a length clear. This distance was gradually increased till they passed the judge between three and four lengths clear. Time: 8 min 15 sec.