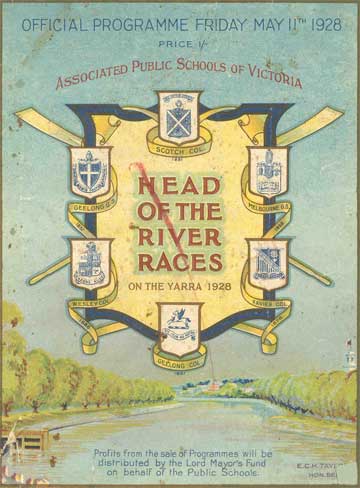 The sixty-first Head of the River was conducted on 11th and 12th May on the Upper Yarra course. The conditions were poor on both heat and final day but 70,000 spectators were not deterred to watch the final. The difficult conditions showed in the very slow time. The Fairbairn Trophy was again presented by Major Charles O Fairbairn.

For Xavier College, it was their golden jubilee year, celebrating 50 years since it commenced in 1878. The school had won all major premierships except rowing and so there was considerable pressure on the club to complete this task. The school was not to be disappointed.

The race had more than it's fair share of difficulties in the difficult conditions. It took three attempts to get the crews away with a false start and a collision shortly after the start between Scotch and Xavier. Scotch had the better start in the end with Wesley briefly in the lead with the benefit of the north station around new cut corner. They fell from the lead when they hit the head wind. Scotch and and Xavier fought out the rest of the race with Xavier taking the lead by Swan Street.

The metropolitan junior crews competing over half a mile at the same venue on the previous weekend. The Geelong seconds and thirds raced on Friday 4th May in Geelong.

The view at the start

Reproduced from Lift her home to victory, lads! A centenary history of Xavier College Rowing by Michael Lefebvre 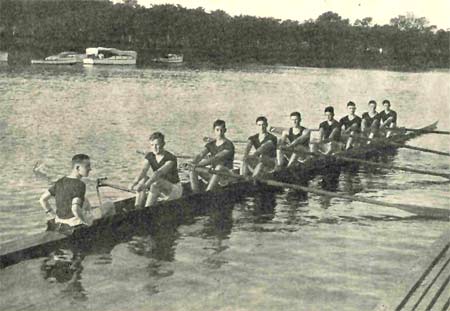 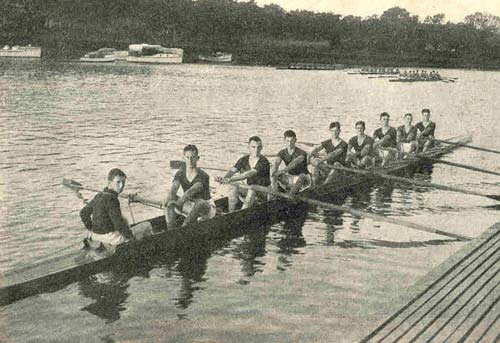 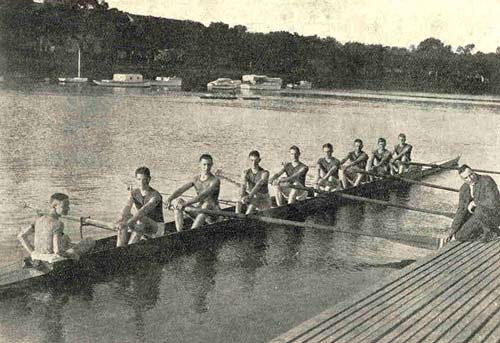 The Age reported on the final as follows

The three crews jumped away smartly at the gun on the third occasion. Scotch for the first ¼ minute rowed 11 strokes and Wesley and Xavier rowed 10 strokes. At the bridge Scotch were leading by half a length from Xavier, with Wesley ¾ of a length further back, Scotch accomplishing the distance in 57 sec., Xavier 60 sec, and Wesley 65 sec. It was particularly smart rowing, and a fast run under the conditions. On the stretch to the corner, Xavier, using their bid bodies to the fullest advantage were gradually reducing the leeway, and before the boats commenced to turn were only 1/3 of a length behind. Scotch were also rowing finely, but were encountering much rough water. Wesley at the stage had dropped back over a length, and the race now resolved itself into a contest between two crews. Coming round the corner, Xavier, with a well timed effort, was slowly reducing Scotch’s lead, and when the boats had straightened up the two crews were fighting on level terms. Then Xavier, who were at that stage rowing at its top, commenced stroke by stroke to forge ahead, and at Brander’s held a commanding lead of half a length. Scotch were still not to be denied. Making a great effort passing the booms, they were overhauling their opponents, when Xavier replied and staved off the attack. A great struggle then ensued to the finish, but Xavier, rowing strongly passed the judge with half a length to spare, after one of the best races ever seen for the head of the river. Wesley were three lengths further astern. Time 5 min 59 sec.

The Argus described the heats as follows:

Both crews went away together, Melbourne Grammar striking at 42, Xavier 40. Xavier led to the bridge by ¾ of a length, taking 55 secs., while Melbourne Grammar took the full minute. Melbourne commenced to improve its position passing the big drain, and was only half a length away at the corner. If the coxswain had taken his crew farther on the north station both crews would probably have been level at this point. Xavier now settled down, and was rowing at 36, with Melbourne a trifle slower. Melbourne was only a ¼ of a length behind at Brander’s, where both crews were striking at 34. At the east end of the wall the positions were the same, and again at the city end of the wall Xavier was only a ¼ of a length in front. Both crews spurted at the drain, but Melbourne could not retain its fine effort, and Xavier passed the line with half a length’s advantage in 5 min 30 3-5th sec.

Both crews went off together, Scotch College rowing at the fast rate of 44 to the minute, whilst Geelong stuck at 40. Both crews reached the Anderson street bridge together in 60 seconds, and passed under it on even terms, Scotch rowing at 38, and Geelong Grammar 36. At the corner Scotch, which was too far out, had an advantage of a third of a length. Coming into the straight, Scotch had settled down to 35 against the win, when Geelong had a bad “flop”, which cost them over half a length. At the wall, Scotch were more than a length in front, rowing at 36, and passing down the side of the wall, gradually drew away, and were two lengths in front at the city end of the staging. Geelong made an effort, but it was hopeless, as Scotch had the race well in hand, and won with two and a half lengths to spare in 5 min 49 1-5th sec.

Third Heat - Wesley College v Geelong College
..the crews were soon sent away, Geelong College going at 40, and Wesley College striking 38. At the bridge Geelong was a canvas in front, having reached there in 0.58. Wesley, on the north station, was very well steered, but it was remarked that the rowing of the Geelong crew from the bridge to the corner was the best seen during the afternoon. Wesley by its steering, was able to come round the corner on equal terms. Both crews were striking 36, and Wesley, who was now showing its form, had a ¼ of a length advantage at Brander’s. Coming to the wall Wesley had increased its lead, but the Geelong boys were not to be beaten, and quickened up their work, coming down the wall with the result that Wesley was only half a length in front at the city end of the wall. In a great race home, in which the light Wesley crew showed excellent rowing, they passed the line with half a length’s advantage in 5 min 35 sec. 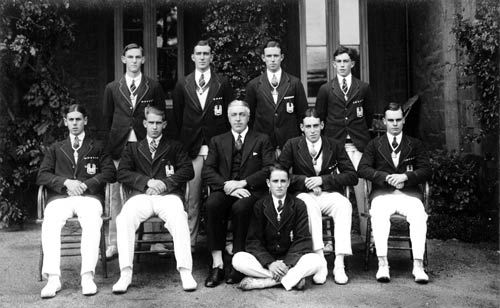 (These races were not conducted at the Head of the River regatta but on 5th May.) 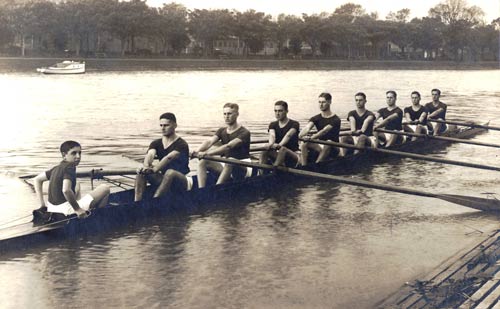 Reproduced with permission from MGS archives

The 1928 Head of the River program describes the race as such:
A very large crowd assembled to witness the regatta last Saturday afternoon over the last half mile of the Henley course. Judging by the enthusiasm one would have thought that it was "Head of the River" day, and the racing was worthy of the patronage accorded it.

This proved a great "go" between the first two crews, who, early in the race broke away from Wesley and Xavier. Scotch got the better of the start and gained an early lead of half a length. This they maintained to the Henley wall, where Grammar challenged them, and a neck and neck struggle ensued from then to the finish, Scotch just getting home after a thrilling finish by one third of a length. Wesley 1 1/2 lengths behind, filled third place and Xavier, a similar distance behind Wesley, was fourth.

(These races were not conducted at the Head of the River regatta but on 5th May.)

The 1928 Head of the River program describes the race as such:
Melbourne early obtained a lead, and, breaking away from Scotch at the Henley Wall, won by a length and a quarter. Wesley were a length behind Scotch and Xavier fourth.

The 1928 Head of the River program describes the race as such:
This proved a remarkable race, for after a third of the distance had been rowed, the stroke of the GGS boat broke his rigger. He held his oar above the water and No. 7 stroked the boat. Grammar won by a canvas.

Melbourne led throughout the race for a comfortable win.