The sixty-fourth Head of the River was raced on the Upper Yarra course thus enabling a three crew final.

The races were conducted on 14th and 15th May before a crowd of 100,000 spectators. Although not a public holiday, Melbourne was certainly hit by regatta day fever and it dominated both sporting and social activities all day and night.

However there was some controversy over the change of date. The Head-Masters decided, as an experiment this year, to hold the races on the last Thursday and Friday of the term, thereby not interfereing with the terms work. The extra week was appreciated by the coaches.

Clerk of Scales: W B Griffiths 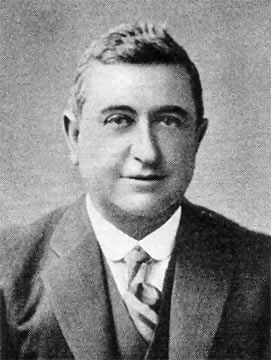 Mark Shea took over the Xavier College crew in 1928 and had immediate success winning in both 1928 & 1929. He was a fine all round athlete and rower with the Civil service Rowing Club which later merged with Melbourne Rowing Club. The 1967 centenary program stated: " For years Mark took a leading part in rowing at Xavier, and those privileged to be associated with him look back with gratitude to his guiding influence on their lives. No doubt they enjoyed his occasional headers into the river when concentration on his crew made his bicycle riding erratic, but nothing he ever did lost him the respect and love of Xavierians."

The Age reported that there were 100,000 spectators present.

As the crews lined up at the start MGS were on the south, Wesley the centre, and Xavier the north stations. There was no wind, and the surface of the river was quite calm. MGS, rowing at 38, got going best, and Xavier and Wesley each stroking 40 in the opening effort. Shortly after the start MGS had a slight “flop”, but did not lose anything thereby. They slowly forged ahead, and dropped the rate to 36, the other two crews striking slightly faster. At the bridge MGS were two-thirds of a length ahead of Wesley, who were a similar distance ahead of Xavier. Coming to the corner Wesley were holding the leaders, but Xavier were dropping back. Turning the corner MGS were still two-thirds of a length ahead. Wesley being a length ahead of Xavier. Coming down the straight Wesley and Xavier were both striking about 38, and MGS were maintaining 36, at which rate they slowly forged ahead, whilst Wesley also began to draw away from Xavier over the last stage of the race. MGS won by a length and a canvas, with two lengths and a half between second and third. Time: 4 min 53 ½ sec. 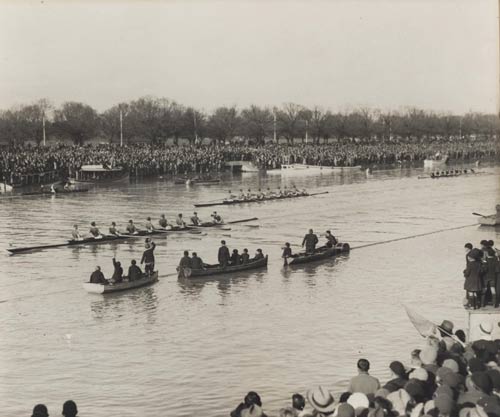 The finish of the race 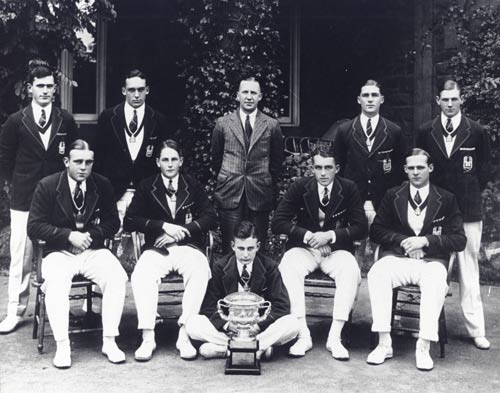 In the first heat MGS had the north station and Scotch the centre. Both went off together, striking at about 36, but MGS were rowing a much more powerful stroke, which soon forced their boat to the front. Half-way to the bridge the dark blues were a canvas ahead, and this had been increased to a quarter of a length at the bridge. Both crews steadied down to about 34 strokes on the run to the corner, and at this point the wind was bad, raising a nasty was. MGS, on the inside, had the best of the water, and forged further ahead. Scotch were now troubled by the waves and No. 5 came to grief in a particularly bad wash, the oar going behind his back. MGS were over three lengths ahead when Scotch again got going, and the latter could make no impression for the remainder of the course. MGS won by 3 and a ½ lengths in 5 min 22 sec.

In the second heat Geelong had the north and Wesley the centre station. Both moved off the mark very fast, striking about 40. Wesley were rowing the better form and had more length, taking the blades through more solidly. The Wesley crew immediately took the lead, and had a third of a length lead half-way to the bridge. At the bridge Wesley were half a length ahead, which was increased to ¾ of a length approaching the corner. Geelong now began to hold their rivals, then moved up. Coming round the bend the light blues picked up nearly half a length, and as the boats came into the straight there was little between them. Coming down the straight Wesley were striking about 38 and Grammar about 36. At Brander’s the Geelong boys were almost level. Both crews then made a fine effort in the rough water, but the Geelong boat rolled badly and they lost a little. Wesley blade work was somewhat ragged towards the finish and the boat rolled dangerously, but the lads picked it up in their swing, and crossed the line half a length ahead. Time: 5 min 22 ½ sec.

In the third heat Geelong College had the north and Xavier the centre station. The wind at this time was stronger at the start, and the umpire remarked that it was difficult to get the crews lined up. Both crews got away about 40. Xavier, rowing with more length, were more effective. At the bridge Xavier were just in front, although it was thought they would have had half a length at this point. Coming to the turn Xavier had increased the lead to a third of a length, and the Geelong crew failed to improve their position at the bend, where they had the advantage of the station. It was a great struggle to Brander’s with the Geelong boys slowly drawing up. Xavier, however, maintained their length with good drive, and the lack of length in the Geelong boat was disastrous for the finishing effort, in which Xavier began to row away, and won by a length and a quarter. Time: 5 min 30 sec.

The Age reported as follows: The race for the second crews provided a thrilling struggle. Wesley took the lead early, but could not draw much ahead. Over the last one hundred yards ¾ of a length would cover the four crews, and Wesley reached the line a canvas ahead. Grammar beat Scotch for second by only a foot. Time: 2 min 41 3-5th sec.

The Age reports as follows: In the race for the thirds, Wesley seemed to be the first to show in front, and after going a short distance Xavier dropped back. MGS kept rather too close to the south bank in dead water. At the end of the Henley staging Wesley and MGS were fighting a great race with Scotch close handy. MGS finished strongly, but Wesley maintained a smart lead, and passed the line with a narrow margin of three feet to spare, whole Scotch were only a canvas behind MGS, with Xavier being a length away. Time: 2 min 40 sec. 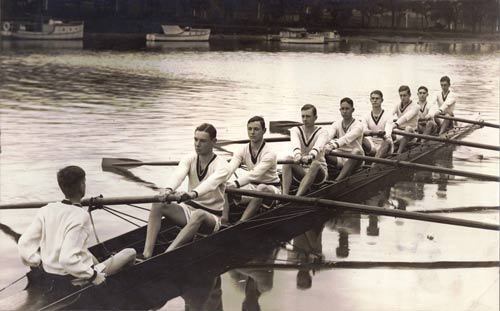 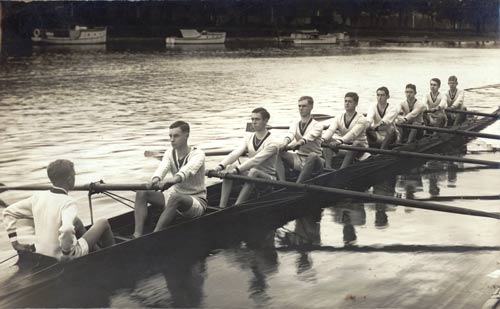 The Age reported: Scotch and MGS were the only schools with fourths crews this year, although the four schools were represented last year in this event. MGS also had a fifth crew, which started in this race. The MGS crew, on the south station, soon took the lead, while their school mates in the fifth crew dropped back behind Scotch. Towards the finish Scotch made a determined effort, but the dark blues had established too big a lead in the earlier part of the race to be overtaken, and won by a third of a length from Scotch, who were a length ahead of the Grammar fifth eight. Time: 2 min 33 2-5th sec.