The twenty-sixth Head of the River was again conducted on the Lower Yarra upstream on 19th May enabling a four crew final. Melbourne Grammar having the choice of course in this year. Geelong Grammar regained the winning position with a solid two length win.

By the half mile, it was clear that Geelong would win subject to accidents. A good race developed for minor placings and Wesley were not in the race.

Scotch were without their usual stroke A R Lewis due to exams.

The Argus reported the race as follows:

The annual contest in fixed seat gigs between the first crews of the public schools took place on the Lower Yarra yesterday.

The Geelong Grammar were on the south side, then came the Wesley and Scotch Colleges, with MGS on the north. Mr. G. Upward, the starter, had little difficulty in getting the boys of the rigs in line, and when his pistol was fired, the crews struck the water simultaneously. The MGS boat was the first to show in front. The rate of striking was about even in all the boats, and the rowing was remarkably clean. The great power of the Geelong crew soon deprived the MGS boys of their advantage, and, as soon as their boat was fairly under way, they began to draw ahead. Wesley as quickly fell into the rear, leaving the MGS and Scotch to provide excitement in their struggle for second place. At the end of a ¼ mile the Geelong boat was clear of the others, and the MGS had a slight advantage over Scotch College. There was intense excitement amongst the supporters of these two crews, and it was hoped that in making the pace for one another they might overhaul the leaders. The end of the half-mile saw no change as regards the second and third boats, but Geelong had gone further ahead, and the Wesley College further astern. The Geelong kept up a long powerful stroke, holding their lead with apparent ease. The MGS and Scotch College spurted alternately, but the length and power had almost entirely gone out of the Wesley stroke, and they fell hopelessly into the rear. At the end of the ¾ mile the Scotch College stroke had made a determined effort to overhaul his college’s old opponents, and for about a dozen strokes he rowed so well and was backed so earnestly by his crew that it seemed as though he would succeed, but in due time Anderson, of the MGS, responded and gained a decided lead from the College. By this time the mile had been covered, and it was easily seen that the ¼ of a mile which remained left no room for any change in position. The MGS made one great effort to catch the leaders, but the task was hopeless. The Geelong boys shot past Mr. C.S. Cunningham, the judge, with the crew still going strongly. They were three lengths ahead of the MGS, who in turn led the Scotch College by two lengths. The Wesley were about 5 lengths astern. The time showed by the two watches was 8 min 21 sec and 8 min 29 sec. The former is more likely correct. 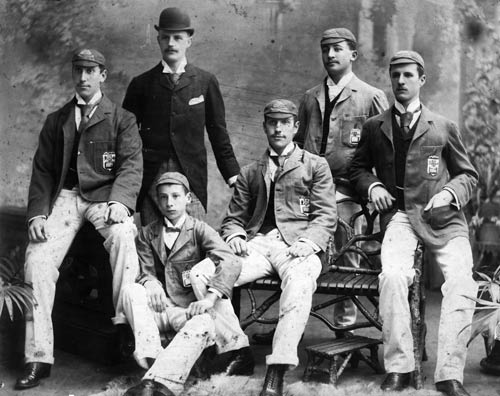 Photo reproduced with permission of MGS archives - Cat No 4233

(This was not raced at the Head of the River regatta but on the Lower Yarra on 13th October 1893.) 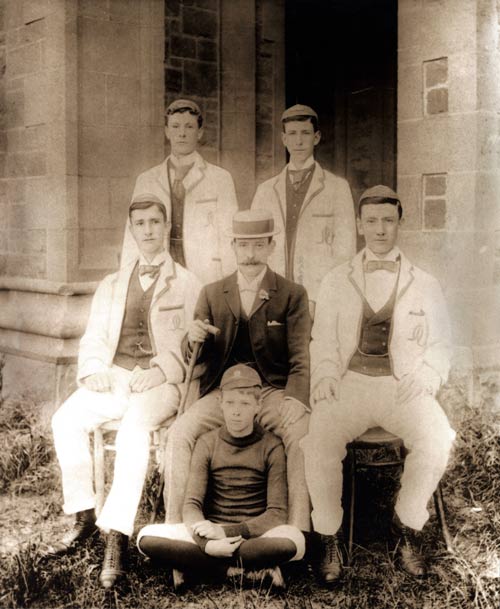 Photo reproduced with permission of MGS archives - Cat No 4166

The Age reported the race as follows:

The annual four-oared gig race for second cress of the public schools was rowed yesterday afternoon between representatives of the Geelong and Melbourne Grammar Schools. The course was exactly one mile in length.

Shortly after 5 o’clock the two crews got into line, and were dispatched to an even start. For about 200 yards the two crews kept well together, after which the Geelong lads forged steadily ahead. The rowing in both boats was very creditable. The Geelong crew increased the gap between the boats as the race progressed, and won by 3 lengths. The time was 5 min 56 sec. Mr. G. E. Upward started and umpired the race, and Mr. Arthur Morrison acted as judge.