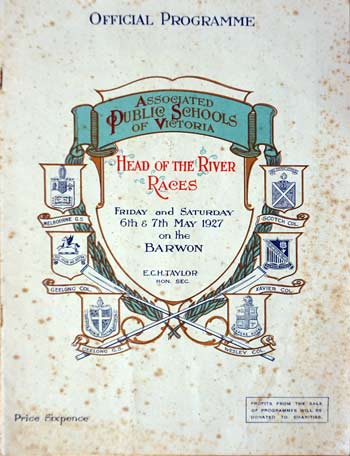 The sixtieth Head of the River returned to the Barwon on 6th and 7th May where Scotch College won again into a slight head wind.

Wesley started as favourites after a good heat win and in the first part of the race gained a 1/2 length lead over Scotch then came Geelong. They extended their lead to one length at the half mile. Scotch then started to calw back the lead and the crews were nearly level with 250 yards to go. Scotch then passed Wesley and went on to win by 1/2 length.

The Fairbairn Cup was presented by Major Charles O Fairbairn.

The Scotch College win came at a good time having lost their fleet in the previous year when their host club Mercantile was burnt down. There were many donations to rebuild their fleet after the regatta.

The metropolitan schools second and third crews had their races on the Upper Yarra on 30th April over half a mile. The fourths raced on 5th May.

Clerk of Scales: A Colenso 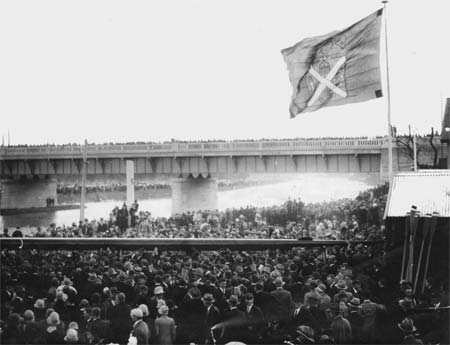 The view after the race

A strong cross breeze delayed the start by a quarter of an hour as the starter aligned the crews. WC got the best of the start but by the half mile SC had the lead. SC and WC fought out the rest of the race within a half length of each other. SC eventually won by only 1/3 length in record time for the Barwon course.

The Age reported on the race in these terms.

The banks of the Barwon were thronged on Saturday by 30,000 people.

Wesley were first to show out at the start, but both their opponents were close up on them. Wesley, rowing in great form, continued to improve their position, and at the returned soldiers’ mill were about 1/3 of a length ahead. Scotch had been splashing a good deal, but were rowing with their characteristic vigorous stroke. Geelong Grammar at this stage were a good length astern, and appeared to be unable to stand up to the pace set them. At a half mile Wesley looked winners, and at ¾ of a mile had improved their position to ¾ of a length.

At this stage the race looked won, for Wesley appeared to be rowing confidently, and it seemed that the strenuous effort of Scotch must tell on them. But the position seems to have been reverse, for it was the Scotch boys who had the reserve of strength, and in a brilliant burst just at the woolen mills they completely altered the position in 50 yards, and entered the last part of the race with their nose in front. The question was could they maintain their effort against such a good combination as Wesley? They answered this in convincing fashion and, rowing with surprising dash and excellent combination, they turned defeat into victory, winning by 1/3 of a length in 5 min 27 4-5th sec. Almost 20 seconds faster than in the heat on Friday. 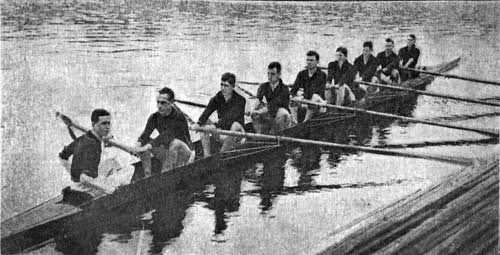 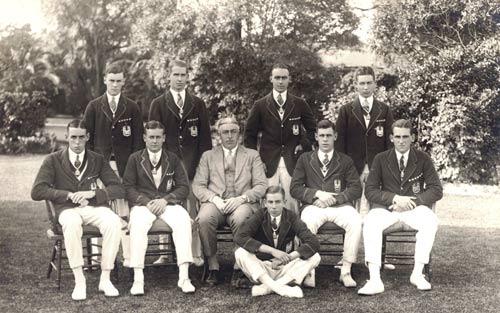 Wesley were on the north and Grammar on the south. Grammar splashed a good deal at the start and Wesley began to creep ahead. At a ¼ mile they lead by ½ a length, which they increased to close on two lengths at half a mile. Grammar battled hard, but did not appear up to their usual standard, although it must be admitted they have formidable opponents in Wesley. The latter showed to great advantage and must have given great satisfaction to their coach, Mr. Chas. Donald. In the sprint home Grammar put up a great fight against odds, but the Judges verdict was a length and a half (to Wesley). Time, 5 min 43 2-5th sec.

The crews in the second heat were Geelong Grammar on the north station and Geelong College on south station. The college crew was considered to have a better chance than in the previous race. They started off at great pace, and quickly led their opponents. Grammar were dirty in their work at the start and a lot of water flew. Geelong College led by a close half a length at the old paper mills, and at half a mile still had this advantage. Nearing the woolen mills they drew a little further ahead, but Grammar, who had been rowing a steadier race, came at College with a determined run and steadily crept up, until the nose of their boat was in front. A great race followed over the last ¼ of a mile, but Grammar, rowing remarkably well under pressure, held their advantage and finished up half a length in front. Time 5 min. 47 sec.

When the starter’s gun was fired, Scotch went off cleanly. Xavier splashed a great deal, but, nevertheless, led Scotch for the first hundred yards. The Scotch crew rowed a great rate of striking, but did not develop rush. Evidently their coach, Mr. Littlejohn, has trained them to a stand up to strenuous work, for they went out after Xavier with great determination. It was a close race for a ¼ mile, when the better rowing in the Scotch boat began to tell, and they drew ahead. When less than half the course had been covered, Scotch definitely had the race in hand, although Xavier were fighting hard. A great deal of water continued to fly in the Xavier boat. Steadily the Scotch crew drew away, and at the woolen mills were a length and a half to the good. They rowed splendidly with great dash, giving the impression that they are capable of going over the full mile at a high rate of striking if called on. Consequently they will take a lot of beating in the final. Judge’s verdict was a length and a half. Time 5 min 48 sec, 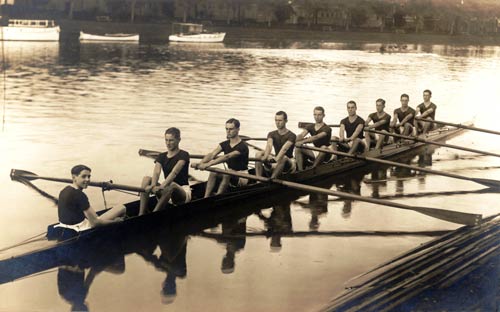 A very close finish on the Upper Yarra half mile course on 30th April. It was reported as being the best second crew race ever. 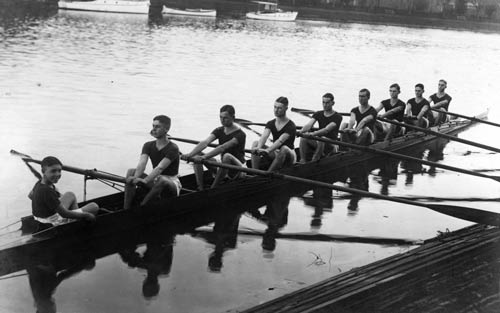 Apart from the start, Melbourne led Scotch well throughout the race.